Answer following Questions in 200 words each, in Blank A4 Sized pages with 1″ margins on each side.

Media begun speculation in Sept 2017 that Jaitley would give fiscal stimulus in Oct-2017 (esp. on DDU’s anniversary) but he says he never said / planned it!

Answer#1: Fiscal Stimulus: To give or Not?

There are three ways to begin any answer (1) definition, (2) origin, (3) data. Given the peculiar nature of these questions- it’s better to begin with a combination of ‘definition + origin’ of Fiscal stimulus.
Fiscal stimulus is a temporary increase in public spending or a temporary reduction in the taxation to boost economic growth. Earlier, it was given during 2008-09 to stimulate Indian economy in the aftermath of subprime crisis. The fall in the growth figures in the aftermath of demonetization and GST (or the fall in quarterly GDP growth rate for six consecutives times), has generated the demand for yet another fiscal stimulus for Indian economy in 2017-18.

Fiscal stimulus is like steroid- it gives short term boost. Once withdrawn, the impact may go away. Hence the word “Temporary” is important. 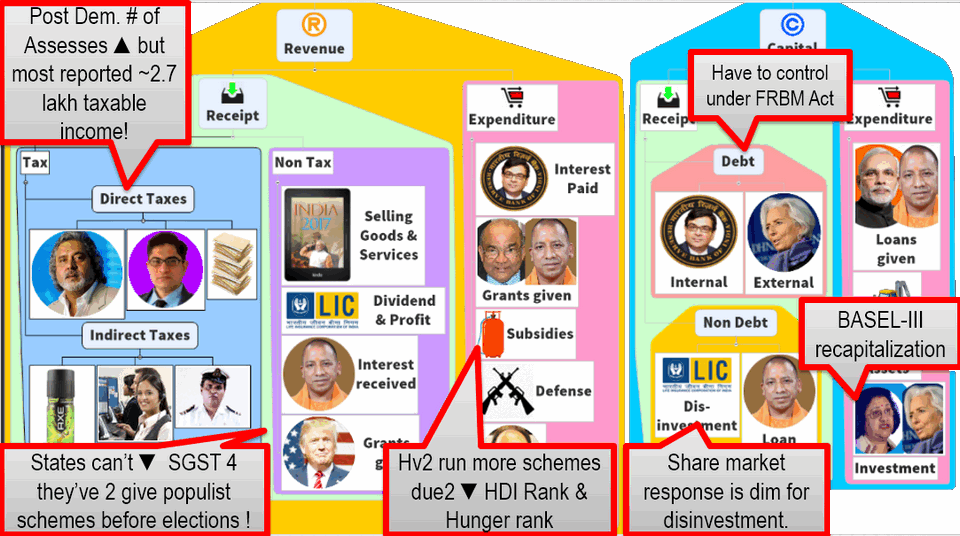 One should spread his legs after measuring the length of the blanket. Else Fiscal Deficit will overshoot.

1+2+3 puts additional stress on states’ own fiscal deficit targets under the FRBM Act. So, they’ll be reluctant to cut VAT on fuel and electricity / OR SGST on any goods / services to boost consumption.

Government did not earn enough from the spectrum auction and disinvestment against the budgeted targets in 2016-17. The new financial year is unlikely to be any better because:

Hence proceeds from the disinvestment are unlikely to fill treasury with such amount that we can launch fiscal stimulus package. Because already we’ve two large expenditures ahead

Money is better spent in social sector than as fiscal stimulus

In the light of above facts, if Government has additional 40,000 crores to be spent, they’re better spend on such social sectors – particularly health and hunger, than a fiscal stimulus for MSME/small traders.

Economic survey 2016-17, Vol1. analyzed the impact of past fiscal stimulus and concluded that for India- A fiscal stimulus, led “growth” is a problem rather “Solution”, because:

Therefore, Budget 2017-18 targeted fiscal deficit at 3.2% of the GDP. FRBM review panel has recommended even more parsimony and bring this Fiscal Deficit down to 3%.

Question is about “can we give fiscal stimulus?” and not about ‘examining why growth fell for 6 quarters?’ so we should not spend more words on dissecting GDP fall- let’s summarize it in the conclusion itself.

Conclusion (Finding Type: F.S. give or not?)

We can do more PHD “thesification”, but these many points sufficient even to handle a 1200 words essay. However, if it’s a 1200 words essay you should diversify the points and talk about the need for economic reforms in individual sector of economy, instead of focusing solely on Fiscal consolidation (parsimony: बचत) as I’ve done here. Anyways, let’s move to the next question:

There are three ways to begin any answer (1) definition, (2) origin, (3) data. Given the peculiar nature of these questions- it’s better to begin with a combination of ‘definition + origin’ of GST.
Goods and services tax (GST) is a destination based indirect tax on consumption. It has been implemented in India under the 122nd Constitutional amendment act with effect from 1st July 2017. Since its inception, the small traders & businessman have been complaining and demanding relief. Following is the assessment of GST problems and whether they necessitate a fiscal stimulus package or not?……

Since you’re mentioning GST for the first time, you should write it in full form: Goods and services tax into bracket GST bracket closed.

But, the overall impact on the small traders / MSME sales is difficult to quantify from the reports of just one or two quarters, because Indian households’ consumptions are determined by many factors including festivals, seasons and inflation in food and fuel.

Useless to do CA-giri on how section __ of CBEC notification dated __ is harming small traders. but these many ‘generic’ points are sufficient.
Btw, I wish a Happy Diwali and a Prosperous New Year to all the serious and hardworking players. (Because non-serious & lazy candidates’ new year can’t be prosperous even if I wished.)