Answer following questions in 200 words each:

Combined introduction will require more time and brain in the exam. Better to treat them as two short notes.

Since the early 90s, the share of women in the labour force has been growing across the developing countries because:

Thus, globalization in the production of goods and services improved female labour participation rate (FLPR) in the developing countries.

Women’s ability to fully enjoy human rights and even to demand such rights, is integrally linked to their economic empowerment. In this regard, indeed, globalization and associated increase in female labour force participation has a salutary impact on women empowerment.

Introduction: (Origin) While India initiated LPG reforms in the aftermath of BoP crisis in 1991 the growth in FLPR in India had been less than that of other Asian giants. Because:

Golden Opportunity is not yet lost

Conclusion: Finding- We’ve not lost, YET

Question was “examine critically”, so answer should be: “yes or no” did we lose golden opportunity or not? In real exam, not possible to think these many unique points in the body, so I’ll drag the conclusion bit longer by linking with SDG. 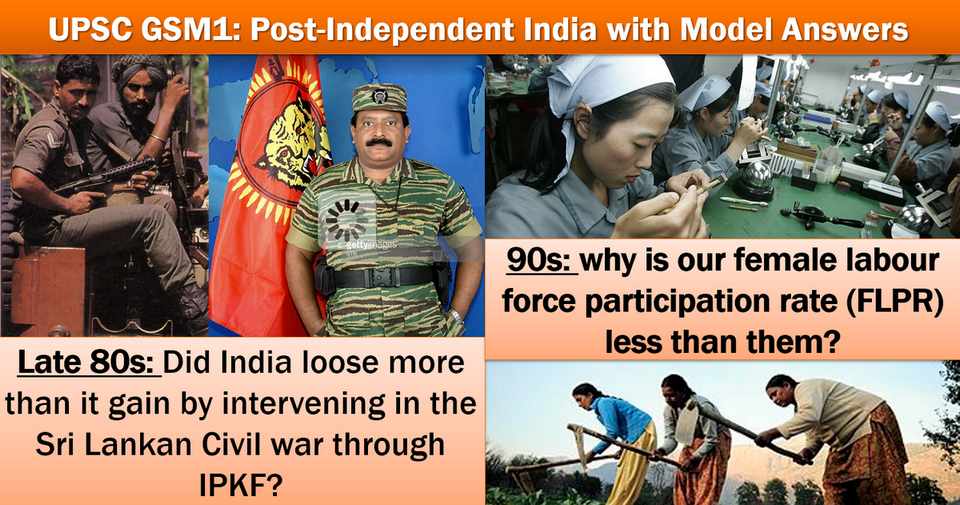 We lost ~1200 soldiers and one former PM. but how do we stretch these two points into 200 words answer? Let’s try:

Avoid adjectives like “assassinated one of the great prime misters of India”- you don’t know the political affiliation of the UPSC evaluators! Always a possibility that all of them have been replaced just like JNU council members.

Loss: Failure made us extremely cautious

Loss: Pak-China use it as excuse:

Question asked you to Critically examine, so in the conclusion you should share finding: yes / no | good decision / bad decision.

While IPKF managed to contain the bloodshed and racial atrocities during Srilankan civil war to an extend, but given the significant loss of troops and goodwill, it’s difficult to count it among the best strategic decisions of the post-Independent India, unlike the liberation of Bangladesh (1971) or the prevention of Maldives Coup (1988).

Observe the careful choice of words. “difficult to count…” I’ve not written that “it CANNOT be counted” or “IT WAS a BAD decision.” परीक्षाखंडमें ज्यादा उत्तेजित होकर वाणी-विलास नही करना चाहिए.