Q. Which of the following organization has released the World Inequality Report 2018 (in 2017-December)?

hint: In India, the top 10% of population earns 56% of India’s national income as per this latest report prepared by World Inequality Lab at the Paris School of Economics.

hint: Ministerial conferences are held every two years so do the math accordingly. It’s true that summit ended in stalemate and no joint declaration could be released but USA did not walk out of TFA. Eliminate accordingly. For model answer on this WTO-summit, read my previous article.

Q. To promote ‘less cash economy’, Government of India has announced to bear the Merchant Discount Rate (MDR) on digital transactions upto Rs.2,000/-. This ‘subsidy’ is applicable to:

hint: MDR is the rate payable by the merchant to the bank for the digital payments. Often small-merchants insist on cash-payments from customer, to avoid MDR cost on their profit margin (or they markup the sale-price accordingly). Hence Government announced to subsidize it for the next two years starting from 1/1/2018. This MDR-subsidization is applicable to all debit card/BHIM UPI/ Aadhaar enabled Payment System (AePS). Eliminate accordingly. If you don’t understand the difference between these technologies, watch my lecture.

Q. UIDAI has suspended the e-KYC license of which of the following banks for allegedly misappropriating the LPG subsidy of its customers in 2017?

hint: In the past, RBI has slapped penalty on first three banks on various occasions for KYC and loans related irregularities. But their UIDAI licenses are untouched for the moment. Deduct accordingly. While UPSC doesn’t have habit of asking MCQs about scams and crooks, but SBI/IBPS examiners might enjoy framing question on this topic!

Q. Under Section 126 of Representation of People’s Act, television channels are prohibited from displaying election ads for __ hours before the voting ends.

hint: Matter is in news because EC had lodged FIRs against Gujarati TV channels for airing Rahul Gandhi’s interview fourty-eight hours before the end of voting.

Q. What is the full form of VVPAT?

hint: Once UPSC asked full form of NITI ayog, so a newbie should not keep arrogance (हेकड़ी) that such abbreviation-full form MCQs will come only in the lower exams. Objective of VVPAT is not to ‘verify’ whether voter is real or fake so 1 and 4 are wrong. VVPAT is meant to help voters to verify that his vote is gone to the right party. Third option has the correct fullform.

Q. USA has officially recognized Jerusalem as the capital of Israel and made an announcement to to open an embassy there (in 2017, December). What is India’s official stand on this matter at UN?

hint: In 2017-July, PM Modi visited Israel’s Tel Aviv but didnot go to Palestine. In 2017-December India voted in the United Nations General Assembly in favour of a resolution opposing the recent decision of US President Donald Trump to recognise Jerusalem as Israel’s capital. So do reading comprehension of above statement and arrive at correct answer.

Q. Which among the following parties have won clear majority in the Nepal election conducted in 2017-December?

Q. What is Bamboo?

hint: UPSC is not averse to asking legal questions related to flora-fauna. Twice already UPSC has asked about species classification in wildlife protection act. Topic in news because though taxonomically Bamboo is a grass, the colonial-era IFA Act classified it as tree / timber, hence felling and transportation of bamboo required permits from government, thereby bottlenecking the bamboo economy. Indian Forest (Amendment) Bill, 2017 aims to undo this by removing bamboo from the definition of tree. Third statement is also right.

Q. Which of the following organization has proposed the creation of “Methanol Economy Fund” for India WEF 1/1/2018?

hint: This fund will help setting up methanol production units in India and reduce fossil fuel consumption by 50% in next 5-8 years. Dr. Rajiv Kumar is the vice chairperson of the correct organization.

hint: Iran and Saudi Arabia produce methanol from Natural gas, where China produced it from coal. NITI Ayog has proposed creating “Methanol Economy Fund” to help setting up ‘coal to methane’ plants in India as we also have large coal reserves just like China. Methanol emits lesser NOx and Particulate matter (PM) than petrol, and produces no SOx as there is no sulphur in methanol. Eliminate accordingly.

Q. The color of Bramhaputra river has become very dark and muddy since the later half of 2017. Newchannels have reported it, and the issue was raised even in Parliament, during Winter-2017 session. Which of the following test is most suitable to objectively measure this particular water quality?

hint: Fecal Coliform a bacteria that propagate in the digestive tracts of humans and animals, it can enter a waterway usually by animal / human waste and septic tanks. BOD is a measure of oxygen removed from an aquatic environment by aerobic microorganisms. Turbidity is the measure of relative clarity of a liquid. It’s measured in nephelometric turbidity units (NTU). In ordinary river water, it’s usually less than 10 NTU. Bramhaputra has 290-400! Experts previously blamed it on the construction of dams and tunnels in China but now it’s revealed that earthquake and landslides in Tibet are responsible behind this mudding of water. 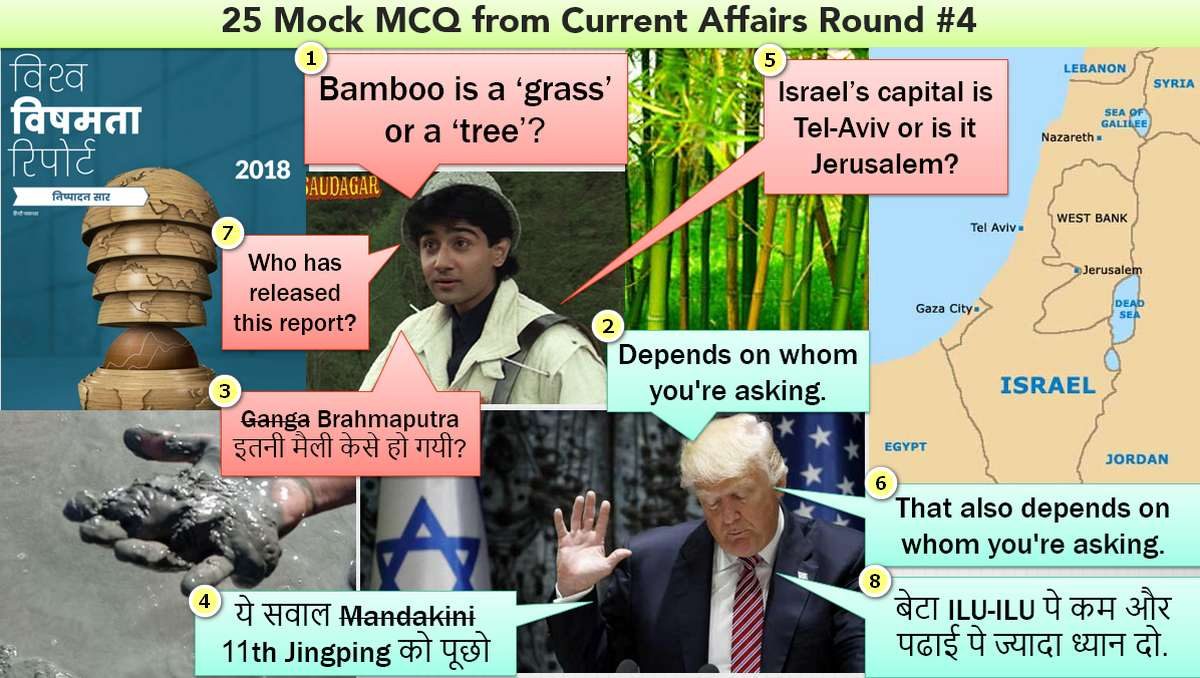 Q. Communication Ministry has launched Project “DARPAN” in 2017-December. Why?

Q. Ministry of Electronics & Information Technology had setup a Committee on cybersecurity, which has given its draft report in 2017-November. Who was the chairman of this Committee?

hint: Chairman is the same judge associated with Committees on (1) Financial Sector Legislative reforms (2) bifurcation of Telangana and Andhra Pradesh.

Q. Which of the following state governments has launched an app for customers to buy fish and fish items?

hint: It’s the same government whose CM has created “Biswa Bangla logo” and given it to the state without taking any royalty over the design.

Q. Which of the following service has become the first to launch IT-enabled online testing for recruiting officers and soldiers, from January-2018?

hint: This Online testing doesn’t mean you give exam from homePC. You’ve to appear at a particular exam centre -just like IBPS and CAT. From 2018, Air Force Common Admission Test (AFCAT) for Officer’s cadre and Scheduled Test for Airmen Recruitment (STAR) for Airmen cadre will be conducted in online mode. So, guess the correct answer. Centre for Development of Advanced Computing (C-DAC) has built this platform- i’ve mentioned this because examiner could ask that well, who built this platform?

hint: He had identified Rajiv Gandhi’s corpse using sample taken from Priyanka Gandhi’s nail. DNA fingerprinting was first developed in 1984 by Alec Jeffreys in the UK, he discovered that no two people could have the same DNA sequence.

These MCQs are more relevant to non-UPSC exams.

hint: all pairs are correct. I’ve framed this question for your faster revision rather than to test your knowledge. In Commonwealth wrestling championship 2017, Olympic medalist Sushil Kumar and Sakshi Malik have won gold medals. Originally CWG-2022 were to be held at Durban, S.Africa but then changed due to financial difficulties.

hint: These economy books were launched Q3-2017 and all are correctly matched for faster revision. Yunus is the Bangladeshi Nobel peace winner (2006) for his Grameen Bank and its microfinance activities. Surjit Bhalla is an economist in PM’s Economic Advisory Council and Rajan Bhai is presently suffering the same bad luck as Crime-Master GOGO i.e. “हाथ आया पर मुंह न लगा” whether Nobel Economics Prize 2017, Chairmanship of US Federal reserve .

Q. Which of the following newspaper gives Ramnath Goenka Journalism Awards for Excellence?

hint: This MCQ is more relevant to UGC-NET’s compulsory Paper-1 subtopic “Mass-Communication”, wherein they occasionally about ask such awards. Ramnath Goenka was the founder of Indianexpress.

Q. Which of the following companies has acquired music recognition app Shazam?

hint: Apple. This is more relevant to certain MBA admission tests in India, where they ask a few MCQs on bizGK.

So far I’ve framed 23 questions. So, to reach the fabled T25 target, here are three MCQs on comprehension for UPSC Prelims CSAT Paper-2

VivaColombia has proposed criminally cheap tickets in its flights to the South America. The only caveat: passengers will have to travel standing up. Aviation regulators in several countries have grounded the idea of ‘Verticle seats’ on safety considerations. Passengers have also protest that standing flights would take the romance out of flying, though it was blown away long ago by terrorism, and the only way to survive an air disaster is to take the train instead.
There is nothing romantic about standing in long queues in order to be stripped naked by X-ray machines and felt up by security, so that you can board aircraft packed like the slave galleys in Ben Hur. On short-haul flights, no one really misses the free peanuts and personal entertainment system. And only the deeply masochistic look forward to airline meals, which have always tasted like freshly microwaved tyre-tread washed down with watery industrial wastes cunningly mislabelled “tea” and “coffee”. For the majority in economy, jetliners are like cattle wagons anyway. Having to stand like cattle will not alter this reality in any manner. (~180 words. Ref: IE)
Q1. In context of the passage, what is meant by the word “masochistic”?

hint: While all four choices correctly describe dictionary meaning of the masochistic person but in context of passage, choice #3 is most appropriate- person who enjoys the activity of “eating” food items that tastes like tires and industrial wastes- is a masochist- whether he finds sexual pleasure in it, that we’ll to ask jailed baba-log.
Q2. Which of the following best describes author’s tone towards commercial airlines?

hint: He’s not optimistic, because last line says “standing like cattle will not alter anyways.” This eliminates #2. “Euphemism” is when we call old person “senior citizen”. His tone for airlines is not respectful like that, so #4 also gone. In the 50:50 between 1 and 3, but 3 wins because Author believes that ‘airlines will continue to treat people as cattle, serve them bad tea and food etc…nothing change- this shows his ‘cynical tone’.
Q3. Which of the following can be inferred from the passage?

hint: While #3 looks tempting but it’s not given in the passage. Hence answer is “4”.