Q. If the rate of inflation increases from low level to moderate level in USA, which of the following consequence(s) are likely to occur?

HINT: Philips curve: inverse relation between rate of inflation and rate of unemployment. Higher inflation is countered by Higher policy rates = inflow of foreign investors to get better returns. Topic is in news because of Steel import duty hike by President Trump and its possible consequences on USA and Indian economy.

HINT: The latest economic survey observed that (1) Per capita income or development levels wise NE < Punjab & Haryana, yet NE better on Gender indices. So, development is not an ‘antidote’ to gender inequality. (2) Sex selective abortion and neglect of girl child= results in 63 million missing women (3) Son meta preference i.e couples will not stop breeding till a son is born = 21 Million “unwanted girls”- They’re neglected in food & education. So, by reading all this, you maybe tempted to tick #2 but the preface of latest survey specifically mentions that “The color of this year’s survey cover was chosen as a symbol of support for the growing movement to end violence against women, which spans continents.” 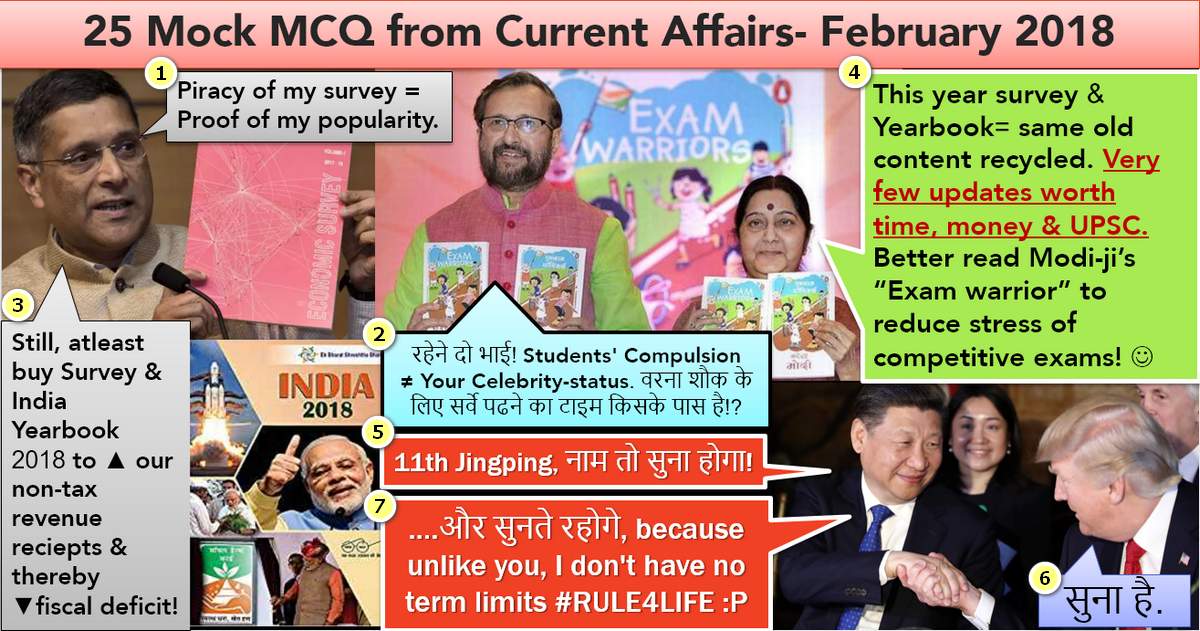 Q. Which of the following is most suitable system(s) for sending payment orders between a domestic Indian bank and an overseas bank who don’t have direct account relationship with each other?

HINT: SFMS is an Indian payment messaging similar to SWIFT. Just like BHARAT stage emission standard (BS-III, IV etc.) is Indian standard similar to Euro fuel standard. To send money via NEFT / RTGS, both banks need to have installed SFMS messaging system. However in this particular question, SWIFT is a more suitable and globally accepted system. Topic is in news because PNB didnot integrate its SWIFT system with Core Banking solution (CBS) system, hence Nirav Modi could do the scam.

HINT: This too is in news because of PNB scam. Both statements are right. Even if you know LoU, you couldn’t tick the right answer without knowing the absolute definition of LoC. So, the lesson here is not to push the luck unnecessarily through ‘guessmaster-giri’.

Q. What is / are the primary objective(s) behind drafting Economic Offenders Bill, 2018?

HINT: This bill aims to deter economic offenders from fleeing India, otherwise their properties will be confiscated by special court. It covers economic offences where amount involved is 100 crore rupees or more. The amount is kept high to prevent unnecessary workload on the special courts.

Q. Which of the following country is the first to launch a sovereign cryptocurrency (in 2018, March)?

HINT: It’s a Pacific Island nation, whose capital is Majuro. To learn more about Bitcoins & Cryptocurrency, watch my lecture.

Q. Which of the following Committee(s) are associated with digital payments?

HINT: Topic in news because the newly elected BJP government of the Tripura state wishes to install statue of Bir Bikram. Gaidinliu was not a queen, it was a title given to her by Jawaharlal Nehru for her courage despite life imprisonment by the British. So, it’s not a trivial-GK question, you’re supposed to know her as a prominent freedom fighter of North-East India, under the history portion- even if you don’t know about Bir Bikram or Kanaklata.

Q. Which of the following concepts / terms are associated with Shankaracharya’s “Advaita Vedanta”?

Q. Which of the following has / have banned the movie “Padmavat” over concerns regarding ‘sensitivities of Islam’.

Q. Recently, BJP made history by unseating five-term incumbent CPM in Tripura. Find correct statement(s) related to the geography and polity of this state:

HINT: This is not a trivial GK question. Itni Polity and Geography maalum honi chaahiye.

Q. In the “NGO Common Cause vs Union of India” judgement on Euthansia, Hon’ble Supreme Court has _ _ _ :

Q. DoT (Department of Telecommunication) has issued directives for “13 digit mobile numbers”. These numbers are meant for:

Q. “Starlink” is a project by _ _ _ to provide low-cost internet access on a global scale using constellation of 4000 satellites:

Q. What is the objective of “RISE” scheme announced in Budget-2018?

HINT: Budget-2016 provided for Higher Education Funding Agency (HEFA) to give loans to government educational institutes for improving infrastructure. Budget-2018 provided for Revitalising Infrastructure and Systems in Education (RISE) with total target of 1 lakh crore for next four years (2022). This scheme will be implemented by HEFA, and IITs will receive the largest chunk of loans.

Q. Both at the Paris Summit 2015 and at the ISA-summit 2018, India has pledged to generate 175 gigawatts GW of electricity from renewable energy sources. What is the internal-composition of this target?

HINT: It’s beyond our ‘aukaat’ to generate more than 5GW from small hydro and more than 10 GW from Biomass.

Q. Burning of crop residues is one of the reasons for the high level of air pollution in Delhi. What did Budget-2018 provide in this regard?

HINT: Hill-states are not in purview of this scheme. Subsidy only for the ‘in-situ’ machinery. i.e. machines which can be used on the farm to manage the crop residue such as Zero Till Seed Drill, Happy Seeder, Straw Baler, Rotavator, Paddy Straw Chopper/ Mulcher, Gyro Rake, Straw Reaper, Shredder, etc.

HINT: Jallikattu (bull-taming) sport is Tamilnadu, Kambala (buffalo cart racing) is Karnataka and Anayottam race (elephants) is Kerala. President of India has given assent to the Prevention of Cruelty to Animals (Karnataka Amendment) Bill, 2017 to exempt folk sports like Kambala buffalo cart racing from the ambit of the PCA Act, 1960. (Topic in news during 2018, February when presidential assent was given.)

Q. What is “Trait-fee” in context of Bt-Cotton in India?

HINT: 2002: India allowed commercial cultivation of Bt-Cotton. Monsanto has given production rights to DESHI companies for its patented Bollgard II cotton seed technology (which uses ‘cry1Ac’ and ‘cry2Ab’ Bt genes). But to use this technology, the DESHI companies have to pay royalty fee or “trait fee” to Monsanto. 2016: Government setup a 9-member Committee for deciding maximum sale price (MSP) of Bt-cotton seeds. 2018: This Committee recommended cut in the trait-fee and overall BT-cotton seed prices because: 1) to bring seed price-uniformity across states 2) Bt Cotton’s ability to resist pink bollworm pest attacks had weakened, so now it doesn’t merit a very high royalty fee or trait fee.

Q. Find correct pairs about the sport-persons in news during Q1-2018:

25 MCQs done, so i don’t have to prepare any RC passage to pad this article to reach the fabled target of [T25]!