Q. Which one of the following events is not correctly matched with the year in which it happened? (CDS-2018-i)

HINT: SWIFT was in news during Jan-2018 due to PNB-NIRAV-MODI scam. And UPSC asked this in CDS conducted in Feb-2018, which shows that examiner is regularly updating the question bank. [SWIFT or NASDAQ inauguration is not otherwise “grand” theory topics, that he’d have asked had this scam not happened. इसलिए भले ये थियरी का प्रश्न है लेकिन पूछा तो करंट-अफेर्स के कारण ही है.] Anyways, SWIFT was designed by Society for worldwide Interbank financial telecommunication in 1973 so first statement is wrong. To know more about SWIFT messaging system, read my article here.

Q. Which one of the following statements about Exchange-Traded Fund (ETF) is not correct? (CDS-2018-i)

HINT: ETF have lower fees than MF. For more, watch my lecture on financial instruments.

Q. Which one of the following is the maximum age of joining National Pension System (NPS) under the NPS-Private Sector? (CDS-2018-i)

HINT: National Pension System (NPS) was introduced. It has been made mandatory for all new recruits to the Government (except armed forces) with effect from January 1, 2004 and has also been rolled out for all citizens with effect from May 1, 2009 on a voluntary basis. Subscribers (any Indian citizen) in the age group of 18 to 55 can join NPS and contribute till the age of 60. (Ref: India Yearbook 2018). BUT, on 1st November 2017, PFRDA made some changes: Now, any Indian Citizen, resident or non-resident, upto maximum 65 years, can also join NPS and continue up to the age of 70 years in NPS.

Q. The Reserve Bank of India has recently constituted a high-level task force on Public Credit Registry (PCR) to suggest a road map for developing a transparent, comprehensive and near-real-time PCR for India. The task force is headed by (CDS-2018-i)

HINT: Y. M. Deosthalee. For more on what is PCR, read my article on Contemporary Loan Issues.

Q. Which of the following statements about the India Post Payments Bank (IPPB) is/are correct? (CDS-2018-i)

HINT: As per India Yearbook 2018, India Post Payments Bank (IPPB) was incorporated as a Public Limited Company in 2016. In January 2017, IPPB launched two branches in Raipur and Ranchi.

HINT: Pradhan Mantri Sahaj Bijli Har Ghar Yojana “Saubhagya” launched on 25th September 2017 (DD’s b’day), aims for electrification of all willing households in the rural and urban areas by 31/12/2018 using REC under Power ministry as nodal agency. There is no ‘compulsion’ on a poorman to obtain light-connection, unlike right to education act where he must send child to school. [Curiously, even Satya Pal Singh Committee’s report in 2018 said that RTE Act 2009 need to be amended because there is no penal provision for parents who do not send their children to school!]

Q. The Ministry of Communication has recently launched a Pan India scholarship programme for school-children called ‘Deen Dayal SPARSH Yojana’. The objective of the scheme is to increase the reach of (CDS-2018-i)

HINT: In November 2017, Ministry of Communications launched a Pan India scholarship program for school children called Deen Dayal SPARSH Yojana to increase the reach of Philately. Under the scheme of SPARSH (Scholarship for Promotion of Aptitude & Research in Stamps as a Hobby), scholarship of Rs. 500/- per month x 12 months = Rs.6,000 will be given to a students of class six to nine.

HINT: Under this scheme, an Officer (Niryat Bandhu) would mentor first generation entrepreneurs interested in the international business. This scheme is implemented by DGFT under DIPP under Commerce Ministry. While GuessmastersTM would point out that second statement ought to be wrong as it contains extreme words “first” and “only”- but they’re wrong here.

Q. Which one of the following statements about the Deen Dayal Upadhyaya Grameen Kaushalya Yojana (DDU-GKY) is not correct? (CDS-2018-i)

HINT: focus of this programmes is on the rural youth from poor families, in the age group of 15 to 35 years. So first statement is wrong. (Ref: India Yearbook 2017) In this case, GuessmastersTM strategy proves beneficial because first statement has extreme word “exclusively”, so it ought to be wrong, and it’s indeed wrong.

Q. In 2018-February, The Statistics Ministry proposed certain changes in the base years. Find correct pairs

Hint For faster revision, all are correct. Critiques say Modi is doing this so that these numbers don’t look bad, as the base years are post-demonetization, post-GST. Anyways, you can learn more about GDP, IIP, CPI, WPI and other indicators in my lecture video here.

Q. Which one of the following statements about India is not correct? (CDS-2018-i)

HINT: Maritime Agenda 2010-2020 has target of 3,130MT so fourth option is wrong (Ref: India Yearbook 2017, Chapter 26: Transport.) Alternatively, if you knew that first three statements are right, then also you could eliminate.
Q120. Growth in production (in percent) of which one of the following core industries in India during the period 2015-2016 was negative?: (CDS-2018-i)

HINT: Observe the following table given in Economy survey 2016-17 volume2. Among the given option, Natural gas had negative growth for the given year. 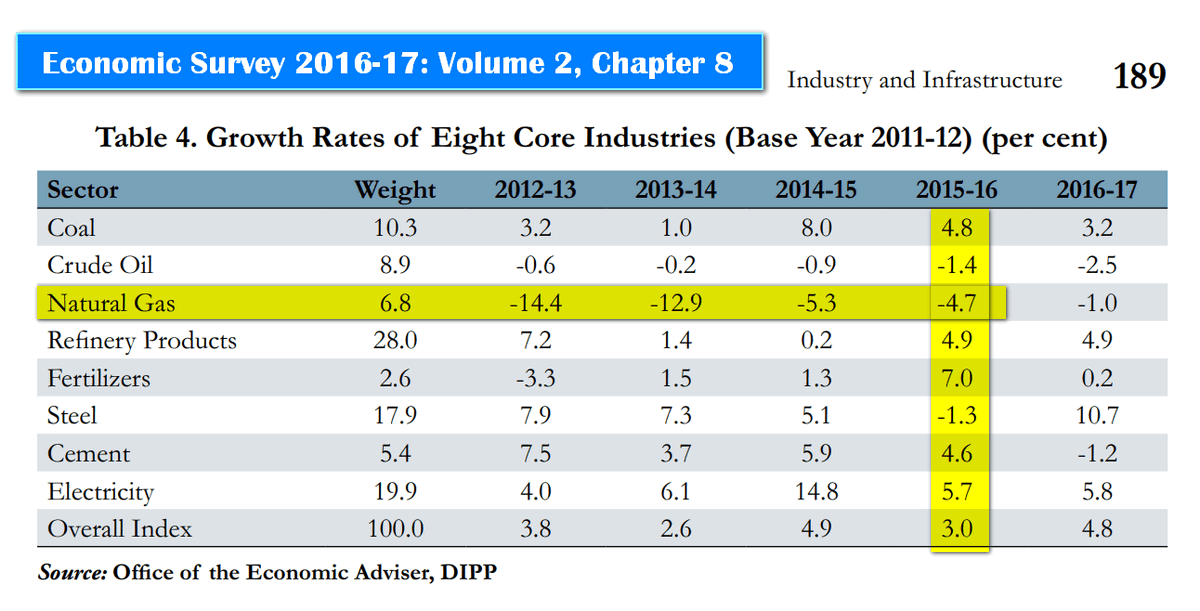 Q. Which one of the following States will host the Nobel Prize Series-India 2018 (Science Impacts Life) Exhibition? (CDS-2018-i)

HINT: This program started from 2017- It was held at Gandhinagar, Gujarat. Then, 2018- February, it was held at Panaji, Goa with the theme “Education and the role of teachers.”
Which of the following portals / projects are designed by the Infosys company?

HINT: Project Insight is for datamining to track tax evaders. IT department gave this project to L & T Infotech Ltd. GSTN portal is managed by the a non-Government, private limited company where Government of India has 24.5% share holding but the actual technology is provided by Infosys.

HINT: For faster revision, all pairs are rightly matched. These factoids have been in news during 2017-18, and also asked in CDS.

Q. What is the objective behind Cyber Swachhta Kendra setup in 2017?

HINT: Indian Computer Emergency Response Team (CERT-In) runs this centre under provisions of Section 70B of the Information Technology Act, 2000. Cyber Swachhta Kendra ” (Botnet Cleaning and Malware Analysis Centre) is a part of the Government of India’s Digital India initiative under the Ministry of Electronics and Information Technology (MeitY) to create a secure cyber space by detecting botnet infections in India and to notify, enable cleaning and securing systems of end users so as to prevent further infections.

Q. The Ministry of Power, Government of India has recently constituted a Committee to investigate the causes of the accident that occurred on 1st November, 2017 at Feroze Gandhi Thermal Power Plant Ltd., Unchahar, in Uttar Pradesh. Who among the following is the Chairman of the Committee? (CDS-2018-i)

HINT: This was asked in UPSC’s CDS but I don’t think such trivial GK will appear in CSE (Civil services exam). P.D. Siwal was the chairman. Power ministry gets the ‘power’ to form Committee under Electricity Act. When solving mock MCQ, you should cultivate the habit of reading the introductory part of the question as well – “Feroz Gandhi plant is located in UP’s Cnchahar.” that way you get to learn new GK.

HINT: Answer is available in the Ch.26 (Tranport) of the Indian Yearbook. North Central = Allahabad; South Central=Secundarabad; West Central = Jabalpur. So match accordingly. Asked in CDS but unlikely in CSE.

HINT: In 2013, UN general assembly decided to celebrate 5th December as World Soil Day [upon request of FAO], because Soil holds three times as much carbon as the atmosphere and provides 95% of our food requirement. 2017’s theme was ‘Caring for the Planet starts from the Ground’.

Q. Consider the following statements about Impact of tax (CDS-2018-i)

HINT: If demand is inelastic, a higher tax will cause only a small fall in demand. Most of the tax will be passed onto consumers because industrialist knows that consumer has no other alternative. So, first statement is right. If demand is elastic, then an increase in price will lead to a bigger percentage fall in demand so the burden of tax will shift to producer, since he can’t adjust the supply. So, second statement is also right.

HINT: begins to diminish. Watch my lecture for rapid revision of Microeconomics.

Following questions were asked in UPSC’s CDS-2018. As such sports recieves special attention in the recruitment exams for CDS/CAPF. Otherwise for Civil services, UPSC has almost stopped asking sports since 2011.

HINT: Tournament was held in 2017-November, at Kakamigahara (Japan). India team under Captain Rani Rampal defeated China in a penalty shootout. By winning this cup, India also qualified for the Hockey World Cup 2018, as Continental champion.

Q. In November 2017, India’s MC Mary Kom won the gold medal at the Asian Boxing Championship, 2017 held at Ho Chi Minh City in Vietnam. In which one of the following categories was she declared winner? (CDS-2018-i)

HINT: She won it on 48 kg category by beating Korea’s Hyang Mi Kim. It was her fifth medal in this tournament. She hails from Manipur.

Q. In November 2017, an Indian short film, The School Bag won the Best Short Film Award at the South Asian Film Festival held at Montreal. Who among the following is the Director of the film? (CDS-2018-i)

HINT: The movie’s plot is based in Peshawar and tells a story about the relationship between a mother and her seven-year-old son who wants a new iphone-x school bag on his birthday, but fate has something else in store for him. Director is Dheeraj Jindal.