Till now, I had solved the first nine questions of UPSC Mains General Studies Paper1 (2017). Now I shall solve the 11th

Q.11: The spirit of tolerance and love is not only an interesting feature of Indian society from very early times, but it is also playing an important part at the present. Elaborate. (GSM1-2017, 250 words, 15 marks) 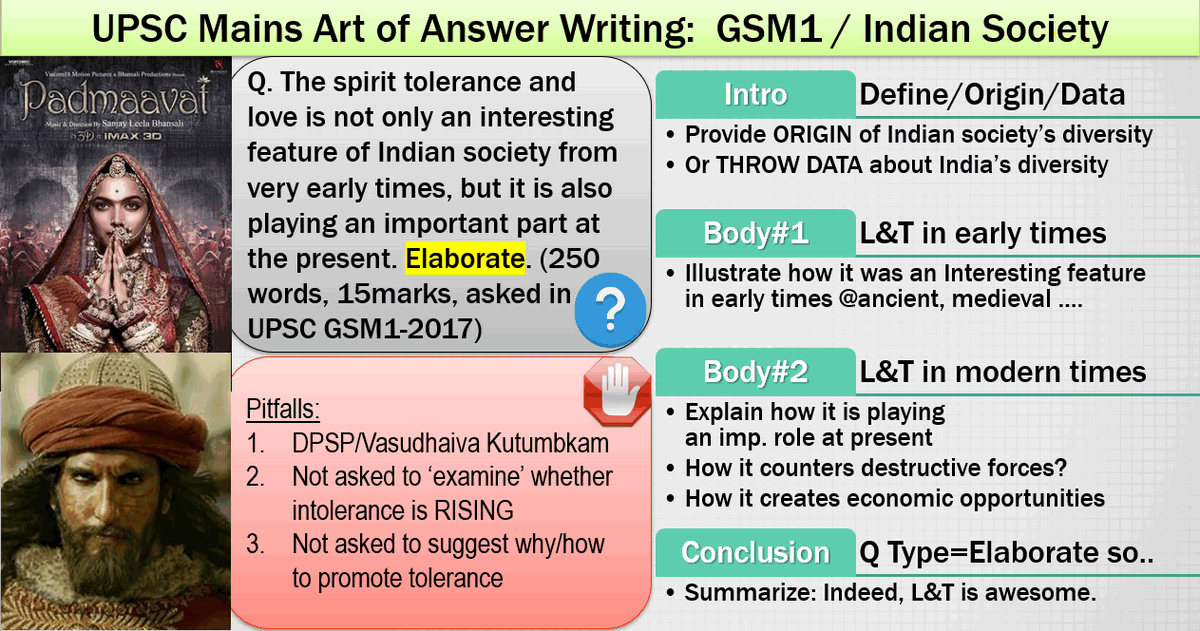 There are three ways to open an answer:

For ancient- medieval – sufficient content available in the NCERT books. I’ll only write only selected points:

We’ve to elaborate the sentence “Love & Tolerance playing an important part…at present”. Meaning, you have to not only give examples but also you have to link it “why / how are those L&T-examples playing important part in (Modern) Indian society?”

Don’t digress from question by narrating Padmavat movie controversy. Because even if you try to portray that “ultimate release of the movie proves our tolerance”- but unnecessary words will be wasted on an event that is merely a drop in the whole timeline of Ancient to Modern India.

Question had keyword “elaborate”, so it’s a “discussion” type question, therefore answer must end in “summary”, No need to give ‘findings / suggestions’.

Barring occasional incidents of violence and hatred, Indian civilization has always celebrated plurality and promoted love & tolerance. This spirit has countered the destructive forces within India and created opportunities for Indians both within and outside our country. Thus, despite the diversity within Indian society in terms of religion, region, caste and language – our spirit love & tolerance has helped all of us to survive, sustain and flourish.