HINT: Since Bimal Jalan was an RBI governor he is an expert in analysing the issue related to RBI economic capital framework and RBI’s dividend to the government.  whereas, Nilekani is formally associated with Infosys so out of the three subjects given in the options, which one do you think he is more expert in? Interchange the subjects accordingly.

Q. Which of the following reforms have been initiated / implemented by RBI to make the credit card and debit card transactions more secure.

HINT: Magnetic strip based card can be cloned easily and therefore prone to frauds. Hence RBI ordered the banks to give EMV (EuroPay, MasterCard and Visa) chip and PIN-based cards to customers WEF 1/1/2019. Tokenization system is similar to generating Aadhar Virtual ID- so that You can give this virtual code during the payment instead of revealing your actual credit or debit card’s  card number, expiry date.

HINT: Rythu Bandhu Scheme-  the Government of Telangana gives direct 8,000 rupees each to farmers for Rabi and kharif crops in the form of bearer cheques. Similarly, in Krushak Assistance for Livelihood and Income Augmentation- Odisha Government gives Rs.10,000 per farming-family per year. They came into news because in the intern budget 2019 government has proposed to give 6000 rupees to the farmers under PM-Kisan Yojana.

Q. Government of India has proposed for ‘size India’ project. It is related to which of the following ministry /  organisation?

HINT: 10% EWS-Unreserved Quota is first implemented in the state where the tallest statue of the world is located. Eliminate accordingly. BTW, Universal basic income concept was given by the previous Chief economic advisor Arvind Subramanian in his economic survey 2016-17.

Q.  The GST Council has formed group of ministers committee to analyse the reason for shortfall in the GST collection by the states.  Who among the following is the chairman of this GoM?

Q. Application supported by blocked amount (ABSA)  is a mechanism related with

HINT: When investor applies for Initial Public Offer (IPO) and Follow-on Public Offer (FPO) to purchase shares, he has to do ASBA i.e. block funds available in his  Savings Bank Account or Current Account (other than Overdraft or loan accounts). If the particular shares are allotted to him, then only the amount will be cut from his bank account, Until then he will continue to on interest on it. Recently SEBI has announced that ASBA rules will apply  even while applying for REITs and INVITs.

Q. India Japan have signed currency swap deal worth 75 billion dollars.  What is the objective / benefit of this deal?

HINT: Currency swap is a contract through which two parties exchange different currencies.

Q. NGO Pratham released its ASER-2018 report in 2019-Jan, Find incorrect statement(s) in this regard.

HINT: It is not ‘survey’ but rather ‘status’, and things have marginally improved in this decade.

Q.  in January 2019, which of the following organisation has announced a ban on opening new colleges for engineering stream from 2022.

HINT: AICTE announced it on the  recommendations of a panel headed by BVR Mohan Reddy of IIT-Hyderabad.

Q. Find correct statement(s) about the annual Davos Summit that was held in 2019 January:

HINT: it is organised by world economic Forum, and 2019 scheme revolve around globalisation 4.0 and the Fourth industrial revolution.

Q. According to the external commercial borrowing framework-2019 of RBI,  who among the following are eligible to borrow money from overseas?

Q. Find correct pair of international guidelines and their objectives: 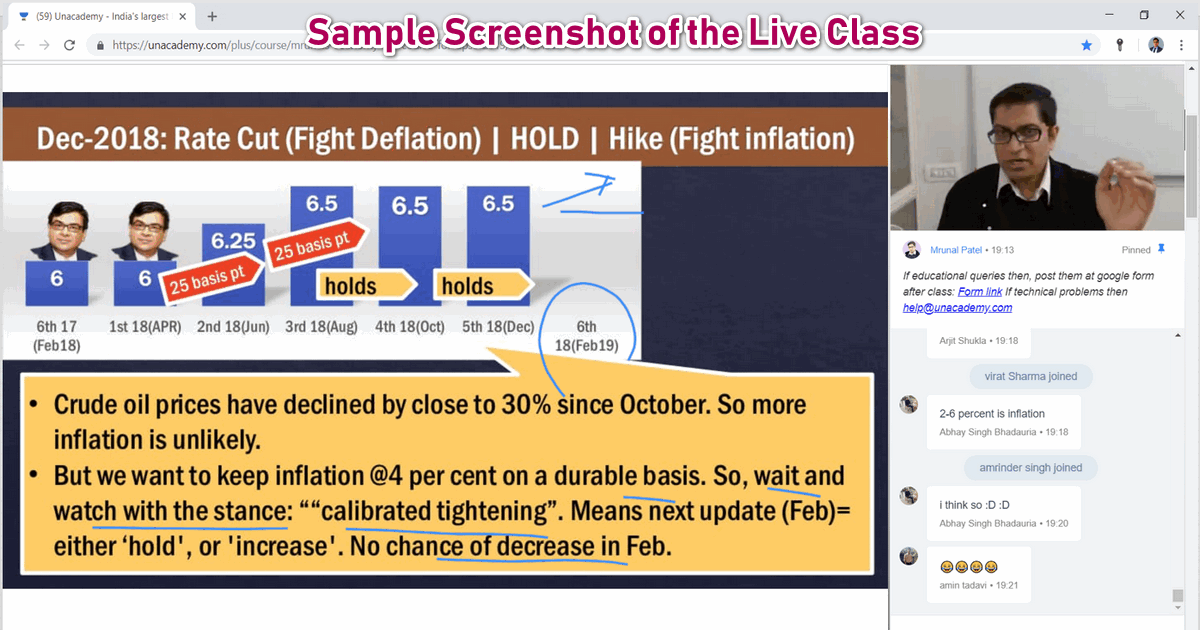 Q. The Citizenship Amendment Bill, 2019 proposes to give faster Indian citizenship to non-Muslims from which of the following countries?

HINT: Traditionally 12 years’ residence in India required before applying for Indian citizenship. But the bill aims to reduce it to just 7 years, if it’s a non-Muslim from A-B-V-P countries. North eastern state do not like this, not one bit.

Q. Government of India passed a bill for 10% quota to economically weaker section (EWS) in the unreserved categories.  it is based on the recommendations of which of the following committee?

HINT: Retired major general S.R.Sinho panel was  formed by the UPA government in 2010 and it had recommended such thing.

HINT: 5 lakh per family per year. Beneficiaries identified through socio-economic caste census, so, if a physically disabled person is rich then he will not be eligible. Cost sharing between Union State is 60:40 (or 90:10) depending on the state.

Q. National Clean Air Programme (NCAP) was Launched in 2019 January by the environment ministry.  Find correct statement(s) in this regard:

HINT: he was known as the tree man of Uttarakhand because he had planted around 50 lakh trees in the Tehri Garhwal district of Uttarakhand.

Q.  Agasthyakoodam peak is located in which of the following state?

HINT: it is a peak located in Neyyar  wildlife sanctuary & Agasthyamala Biosphere Reserve in Kerala. Kani Tribals living in this region forbade the entry of women on the mountain where celibate Agasthya Muni is worshipped. However a lady from the Intelligence Bureau was able to climb after Kerala High Court order.

Q. Prime Minister Narendra Modi renamed three Islands of Andaman and Nicobar in 2018-Dec. to mark the 75th anniversary of freedom fighter Subhas Chandra Bose's declaration of the formation of the Azad Hind government in 1943. Find correct pairs of the old name vs new names of these islands.

HINT: for faster revision, all of them are correct.

Q. In 2019-Jan The parliament of Macedonia voted in favour of renaming the country to “North Macedonia”. This is done to distinguish itself from the “Macedonia” province  in  _ _ _ country.

HINT: For long, country of Macedonia wanted to join EU and NATO but Greece blocked it saying we also have province named ‘Macedonia’. 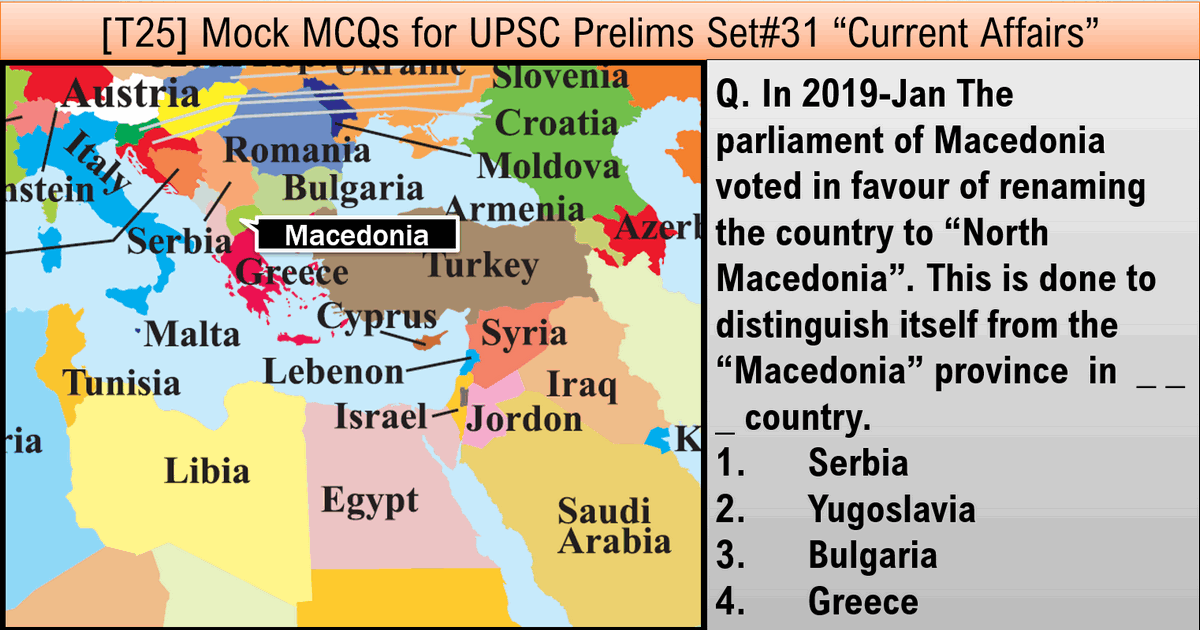 Persons in News, Books in News

These are more relevant for the non-IAS exams

HINT: Started giving from 1995 onwards. Winners are selected by committee headed by the Prime Minister, The administrative issues are looked after by the Ministry of culture.

EkalAbhiyan Trust for education of rural -tribal children. 2018: Yohei Sasakawa for Leprosy Eradication in India and across the world. Award comes with Rs.1 crore.

Q.  “The rural manifesto”  is a book authored by

Q. Who is Tulsi Gabbard?

HINT: She has the highest career ambition.  so which option do you think is most appropriate?