what was happening before WTO?

Today we have this fun, because of globalization + import of foreign products & Govt. doesn’t put high custom / import tax on it. (no high tarrif barriers)

So, The Primary objective of WTO is to remove the tarrif barriers / Custom duties. = integrate all nations in international economy.

For this, WTO will consult with all member-nations, and will make legally binding agreements.

But there will be some bad-nations who won’t play by the rules & try to cheat such agreements. So second objective of WTO is ‘Dispute Resolution’
that’s like an international civil court.
Now see the 3 most imp agreements of WTO. See this chart

Now lets see their annex 1 by 1 via charts. 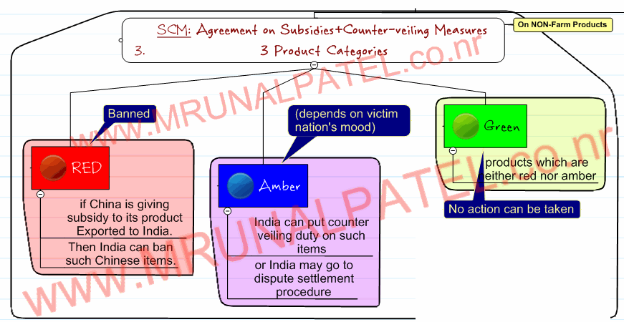 Apart from this, shipment inspection and anti-dumping are also included in GATT annex.

like I said ago, TRIPS doesn’t have any annex! But TRIPS is very imp agreement in today’s world full of technologies-so lets see what’s it about t.

Its one of the agreement between WTO member nations.
TRIPS doesn’t have any annexes.

What is TRIPS all about?

Why TRIPS is imp?

Apart from above 3 agreements (GATT, GATS, TRIPS) other 3 imp agreements are-(see this diagram)

What is the Use of these agreements? / What are the trading principles in WTO?

Exception to this principle

to implement WTO Agreements, the 3rd world nations have to change their policies. = reform
(remember the pre-LPG Era – quota,licence,inspctor raj)

What was before WTO?

so WTO is better than GATT?

first lets see what positive things happened then we talk of Doha Rounds and finally about What’s India’s problem in Doha rounds.

What did India Gain from WTO?

what is DOHA?
Doha is capital city  of a small nation called Qatar.
4th Ministerial conference of WTO was held in that city in Nov.2001.
and they (member nations)  started talking about some new agreements & issues- and the talks continued.. so this entire package is called ‘Doha round of talks.‘ aka “DDA = Doha Development agenda.”
Fifth Ministerial Conference was held in  Cancun, Mexico in September  2003.
What were they talking in Doha?
Developing nations were complaining that they’re facing difficulties in implementing WTO agreements.
so concessions were given to them.

items for new negotiations in Doha

the Doha conference failed because it ended with out any consensus.

What was India’s Problem in Doha?

Apart from this, India has insisted on a large number of special products that would not be exposed to wider market opening

Like I said ago, more mobile companies are good. Because it increases employment. (you can be a representative of some mobile co. or if you’ve retail store, you can sell pre-paid cards etc. or you can start your own mobile repair shop and so on…)
But same is not true about agriculture sector,  since 70% of India’s population depends on one way or another with the agriculture sector. So if cheap foreign items are allowed, then it’ll create huge problem for their employment. Its easy for each American farmer to produce tonnes of grain (and sell his produce cheap), because every farmer has huge farms, latest machinery, fertilizers & great seeds+ continuous water supply + subsidy. But same is not true in India.

However the problem of food-price inflation should also be taken into account. (= read editorials, you’ll face such topics in mains / essay.)

NAMA=  Non-agricultural market access negotiations
European Union has threatened to approach the World Trade Organisation (WTO) again if India does not remove the inter-state tariff disparities. “We want India to get rid of its taxes on wines and spirits in different states to allow easier access to European wines, failing which we will approach the WTO again,”

1944
Bretton Woods conference,
they wanted to make ITO (International Trade Org.) but it didn’t happen.
1947:
GATT (General Agreement on Trade & Tariffs) established
It was criticized as being  ‘RICH MEN’S CLUB’
1986
Uruguay Round of Talks
Service & Intellectual Property rights related topics included in the debate
1993, everyone agreed on it
1994 (Marrakesh, Morocco)
All nations signed on agreement & WTO  was established
2004
148 nations are members of WTO, covering 94% of international trade.