Why is Russia Unhappy?

Why is India unhappy? 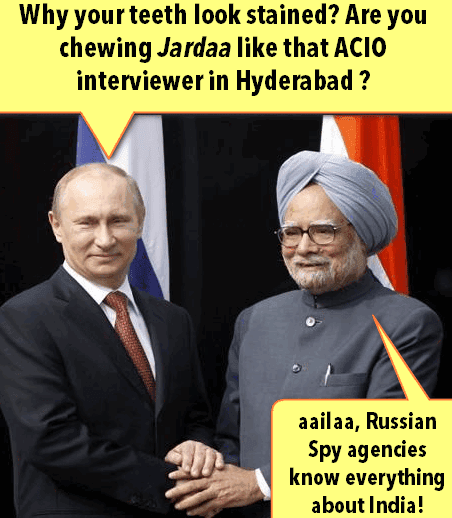 Putin-Mohan agreed to take steps to increase the bilateral trade to 20 billion US Dollars by 2015.

Government  has kept Kudankulam Unit #1 and #2 outside the purview of nuke liability act, saying they were being constructed before passing of that Act.

but we want them under the nuke liability act. (so, if disaster happens due to faulty Russian equipment, we can demand money from them.)

During the summit India gave orders to buy

Mohan-Putin signed agreement for use of GLONASS.

India and Russia want Afghanistan to be free from

We’ve agreed to work together in Afghanistan to achieve ^these.

But it is not true, because

Mohan: There seems to be a mistake in the calculation. Total should be 47.9 billion dollars.
Putin: sorry mate, I don’t keep chillar just like Delhi’s rickshaw-walls. Figure rounded off to next 50s and 100s.
Mohan: But how am I going to justify this expense-mismatch in Government account books? CAG will rip me apart!
Putin: Chillx, just show it as bill for serving Desi Liquor to delegates and foreign journalists during this Summit.
Mohan: oh yes, then it’ll be a legit expense under diplomatic protocols. Indeed whaat an idea sir-ji

For the Archive of all articles on Diplomacy and International relations: visit Mrunal.org/diplomacy