From the earlier Debt vs. Equity article, you know there are two (legit) ways to arrange money for starting or expanding a company

Difference between Bonds and Debentures?

Overall, the principle behind Bonds and Debentures is same: They offer fixed interest rate + principal repaid at the specified date.

Based on ‘convertibility’ the Debentures are of two types

From investor’s view, this “option” to convert Debenture into Shares is good ONLY IF

BUT if the Company is going bankrupt, then it is better to avoid converting the Debenture into shares.  Because when a company is liquidated (i.e. its assets sold off),  the Debenture holders get the money before the shareholders.

It means Sahara OFCD is a bit tricky game. Investors should have some knowledge and understanding of share prices, company performance etc. else they could lose money. (or end up not getting maximum profit out of their investment). Now let’s move to the SEBI-SAHARA case.

These ^two companies Issued OFCD to collect money from investors.

~23 million people, mostly from villages and small towns subscribed to this scheme. They invested ~24,000 crores rupees in these OFCDs of SAHARA. 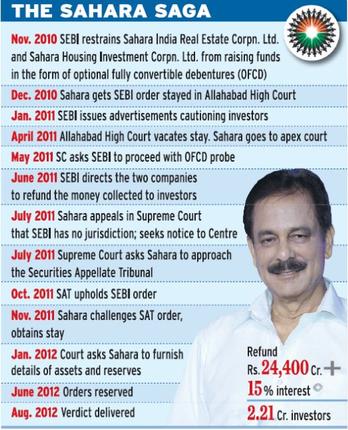