Why didn’t Chindu earn as much capital money as he had expected? Because…

So why didn’t disinvestment fetch truckload of cash?

Until now, we learned the annual financial statement looks like this

But in the late 80s, Government comes up with a new method to classify Expenditure (outgoing money) => plan vs non-plan Expenditure. This new format of annual financial statement, looks like this Wait how can government change the format of annual financial statement?

we further classify this plan Expenditure into two parts 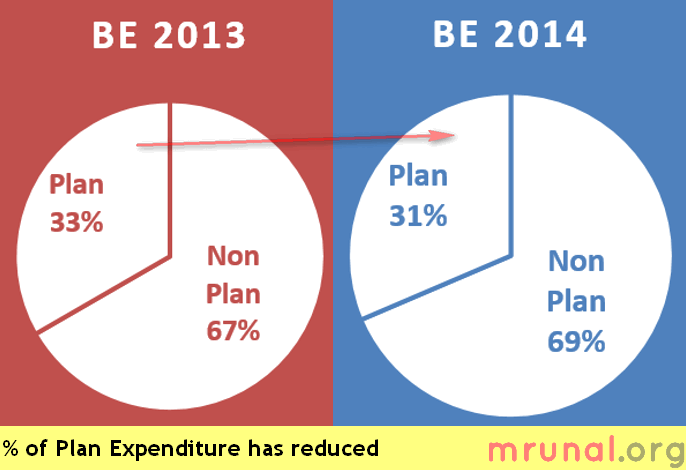 You can see, Plan Expenditure reduced from 33% to 31%. This is the main criticism given by Opposition parties that Chindu reduced plan Expenditure => Congies don’t care about the growth and Development.

MCQ Wisdom: majority of government money goes into revenue Expenditure (be it out of plan or non plan or total Expenditure.)

We’ll see the schemes in next article. We’ll see about the schemes and subsidies in fourth article. Let’s move to deficits.

This is the difference between total incoming money vs. total outgoing money

In ALL of above cases, budgetary deficit is ZERO. Because total income is same as total Expenditure. How is this possible?

still doubt? Read the next topic..

Observe in above table, every year Revenue deficit = Capital Surplus. That’s why Budget deficit is ZERO.

To put this mathematically

But in case of capital part, we’ve as much surplus, as the deficit in Revenue part. that’s why budget deficit becomes ZERO.

So million dollar question is: how did Chindu manage to perform so excellently despite all the policy paralysis, shortfall in tax collection, shortfall in disinvestment targets- and overall high level of inflation and subsidies?

How did Chindu reduce fiscal deficit?

There are two ways to reduce fiscal deficit:

Let’s check how Chindu used these three methods to bring fiscal deficit to 4.6% of GDP:

Thus, with many such measures, Chindu managed to reduce the fiscal deficit (@4.6% GDP) even better than his original target (4.8% GDP).

For the next financial year (1st April 2014 to 31st March 2015) he has made even more ambitious target: to bring down fiscal deficit to only 4.1% of GDP. Will he (or the successive government) achieve it? Critiques say 4.1%= Mission Impossible. Because

anyways, So far, we learned:

Why did Chindu reduce fiscal deficit? So, what will happen if India’s rating is reduced to “BB” (junk status)

Had Chindu over crossed the fiscal deficit target (e.g. 4.9% or 5% instead of 4.8%) then S&P would have reduced our rating to junk status (BB) = foreign investors will have to pull out money from Indian market.

Therefore, to specifically appease S&P and other foreign rating agencies, Chindu made conscious efforts to keep fiscal deficit lower than 4.8%. He even gave ambitious 4.1% target for 2014-15. (In hope that S&P is impressed and increases our rating from BBB to A => more investment can come.).

Secondary reasons= to save the economy

In the current situation of Indian economy, if fiscal deficit is lowered, it’ll give us positive impact because

Primary deficit = fiscal deficit MINUS interest on previous loans.
ya, but why do we need to find primary deficit?

hmm….Primary deficit is decreasing. so is it good or bad? Again, observe that Revenue deficit = capital surplus (in every cell of above table). Why? Because government borrowed that much money (=incoming capital receipt) to fillup up the revenue deficit. that’s why Budgetary deficit became ZERO. (total expenditure-total income).

[Table] Deficits as % of GDP