Official name: Indira Sagar Multipurpose project
What are the objectives of this project? 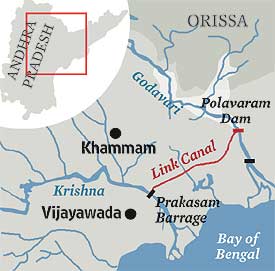 Case pending in SC, Taarikh pe taarikh. ok then why in news?

Q. Which of the following state governments are officially opposed to Polavaram Project?

Q. In May 2014, President of India promulgated an ordinance related to Polavaram project. What was its purpose?