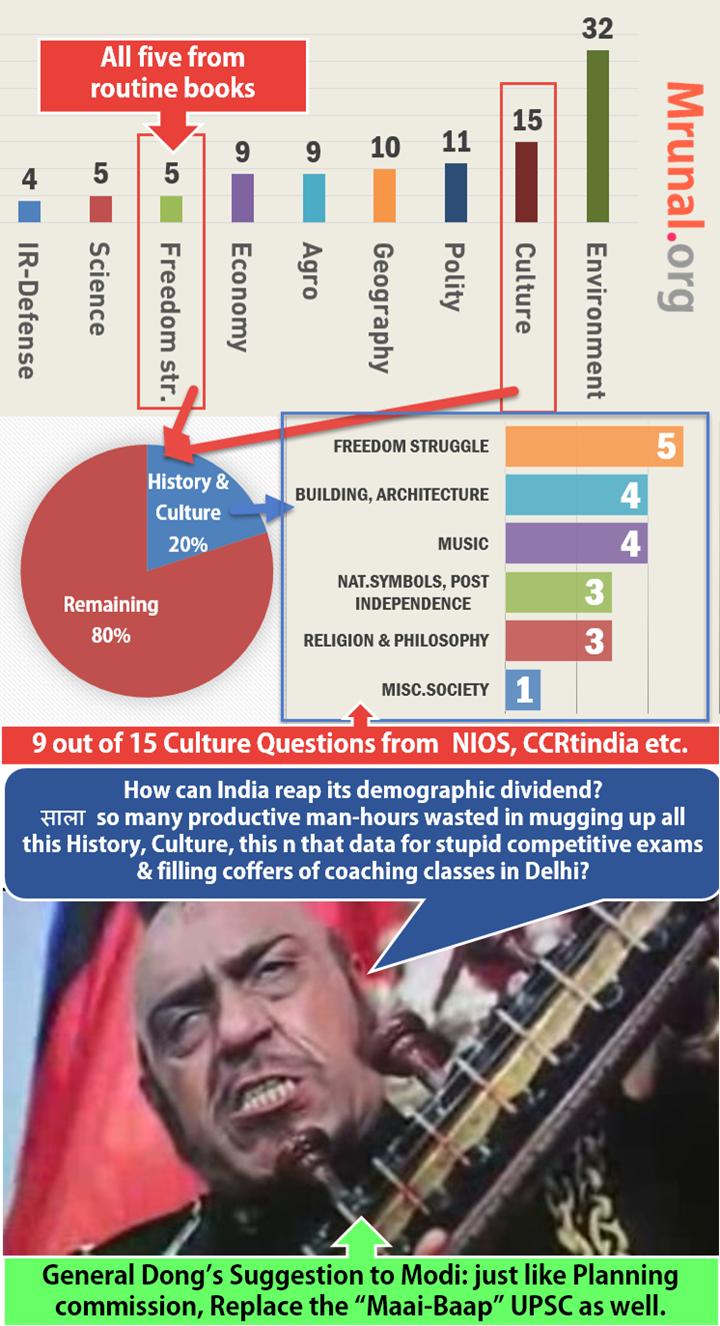 Debatable, depends on preparation level. Nonetheless, I classify them to prove two points

Easy Questions: Given verbatim given in routine books

When answer not available directly in the routine books and/or nearly impossible to recall in exam.

How to prepare Culture for CSAT-2015?

First we have to objectively check which sources were useful?

So, how to approach Culture?

How to prepare History for CSAT-2015

Anyways how to approach History for CSAT-2015?

What about Ancient and Medieval?

1. Which of the following Kingdoms were associated with the life of the Buddha?

Select the correct nswer using the code given below.

To get a better mental picture, first let’s find modern day equivalent of those places

We can eliminate choices involving number 2 (Gadhara) because Buddh never travelled to Pakistan.

So we are left with C or D.
Alternatively, As per Britannica

Therefore, answer: only C only 3 (Kosala) and 4(Magadha.)

Statement #1 is wrong because:

Statement #2 is wrong because

Hence answer D neither 1 nor 2 are correct.

Q3. Which one of the following pairs does not form part of the six systems of Indian Philosophy?

So, accordingly, eliminate the correct terms. (Because we’ve to find the wrong term)

Answer is C: “Scholars” because

Q2. With reference to the cultural history of India, the term ‘Panchayatan’ refers to

Panchayatana – a temple that has a central shrine surrounded by four other shrines.

Q3. With reference to Buddhist history, tradition and culture in India.

Q4. With reference to the Indian history of art and culture, consider the following pairs:

Which of the pairs given above is/ are correctly matched?

Q1. With reference to the famous Sattriya dance, consider the following statements:

Q2. A community of people called Manganiyars is well-known for their

Manganiyars — a tribal community from Rajasthan with a strong musical tradition

Therefore, Option B is most apt.

Therefore, only 1 and 3 correct. Answer is C

July 22, 2014’s Hindu newspaper says, Though Yakshagana is native to coastal Karnataka, the artform has a good number of admirers all over the State and other parts of the country as well. Therefore, final answer C 1 and 3 only.

Q4. With reference to India’s culture and tradition, what is ‘Kalaripayattu’?

Q1. The national motto of India, ‘Satyameva Jayate’ inscribed below the Emblem of India is taken from

Q2. Chaitra 1 of the national calendar based on the Saka Era corresponds to which one of the following dates of the Gregorian calendar in a normal year of 365 days?

Answer is A because:

Which of the above has/have been declared as ‘Classical Language / Languages’ by the Government?

News appeared in Feb 2014, in both TheHindu and PIB, when Odia was added as 6th classical language.

Therefore answer is C only 2(Kannada) and 3(Telugu).

Q1. In medieval India, the designations ‘Mahattara’ and ‘Pattakila’ were used for

Overall, we can certain that A, C and D are wrong. Therefore, Final answer B village headmen.

Q1. The Partition of Bengal made by Lord Curzon in 1905 lasted until

Q2.  The 1929 Session of Indian, National Congress is of significance in the history of the Freedom Movement because the

Q4. What was/were the object/objects of Queen Victoria’s Proclamation (1858)?

But some people engaging in fierce debate wars about statement 1, so, let’s crosscheck

Q5. The Radcliffe Committee was appointed to