[Answerkey] CSAT-2014: Polity Questions with explanations for all booklets 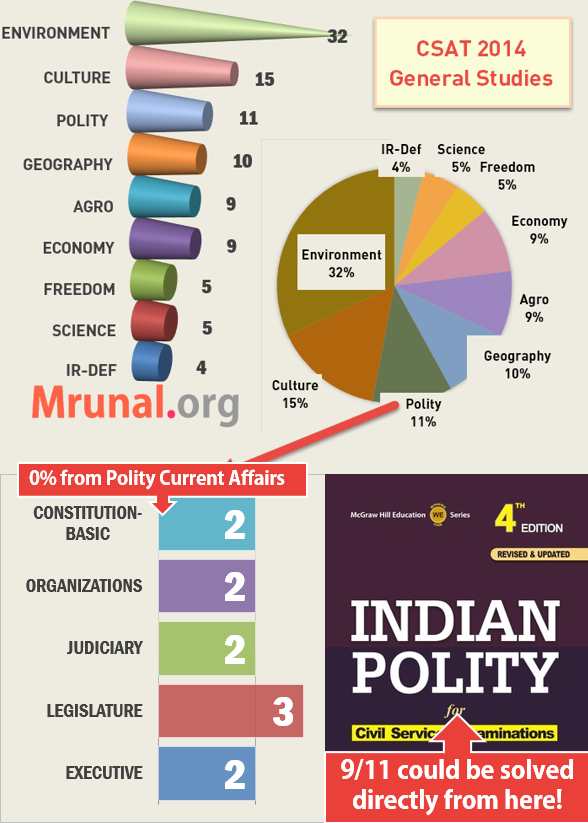 Polity: Analysis vs other exam

Among CDS, CAPF and CSAT conducted this year, You can see some continuity and some divergence.

Yes, after all the purpose of doing this answerkey majoori is not cut-off speculation but to fine tune strategy for next year.

Q2. Which of the following are the discretionary powers given to the Governor of a State?

We must use elimination method, otherwise there is good chance of making silly mistakes.

Therefore, statement 1 and 3 are definitely right. Eliminate all choices, that donot have (1 and 3) together.

Now we are left with B and D. Let’s focus attention to statement 2. Appointing the Ministers

“The chief minister enjoys following powers….Governor only appoints those persons as ministers who are recommended by the Chief Minister.”

In other words Governor doesn’t have “Discretion” in appointment of the minister.

Therefore, B is the final answer.

1. Consider the following statements regarding a No-Confidence Motion in India:

No confidence motion can be introduced in Vidhan Sabha therefore statement #2 is wrong. because it uses the word “only” Therefore, answer is (B) only 2.

Final Answer? UPSC’s official answerkey. sometimes they drag the “only” logic, sometimes they don’t. (as i’ve observed in some of the economy questions in past exam, so pendulum can swing either way.)

Q2. Which one of the following is the largest Committee of the Parliament?

Therefore, largest Committee is Estimates, given its 30 members. Hence answer is (b)

1. Which one of the following Schedules of the Constitution of India contains provisions regarding anti-defection?

The 52nd Amendment act of 1985, added 10th schedule to the Constitution. This is often referred to as anti-defection law.

Q1. The power of the Supreme Court of India to decide disputes between the Centre and the States falls under its

“…As a federal court, the supreme court decides the disputes between centre and one or more states….”

SC No. of Judges

Q2. The power to increase the number of judges in the Supreme Court of India is vested in

Laxmikanth Chapter on Supreme court. Page 25.1 Topic “organization of Supreme court”:- …Parliament has increased number of judges from 10 in 1956 to…..”

Q1. Which of the following are associated with ‘Planning’ in India?

Finance commission is involved in distribution of taxes and grants. It is not involved in planning. So by just eliminating all options involving statement 1, we get answer [C] only 2 and 5 correct.

The draft five-year plan, prepared by the planning commission ‘s first submitted to the union Cabinet. After its approval, it is placed before the National development Council, for its acceptance. Then, the plan is presented to Parliament, with its approval, it emerges as the official plan and published in the official Gazette.

all those are “stakeholders” and therefore involved. Hence answer (D) 1 to 5. Anyways, UPSC’s official answerkey=final judge.

Sidenote: there was also an MCQ on “theme” of five year plan but I classify it under economy.

Q2. Which of the following is / are the function/functions of the Cabinet Secretariat?

Statement number 1 and 2 are correct. As per following resources

Statement #3 outside the realms of cabinet Secretariat. Financial resources are allotted to ministries, as per the provisions in budget prepared by finance ministry. Therefore, answer C only 1 and 2.

Q1. In the Constitution of India, promotion of international peace and security is included in the

Q2. Consider the following statements : A Constitutional Government is one which

While both statements are correct as such. But are both necessary to explain “what is a Constitutional government?

Any corrections, do post in comments but with reference source.