As such I’m writing summaries of Economic survey 2013. But Companies Act, 2013 is a recurring term in many chapters. Therefore, needs to be covered parallel.

What is corporate governance

Many definitions, you need to memorize at least one- for the GS4.

Corporate governance is a way of directing the company

Board of directors consists of

Minimum directors in each company

Job of Independent director = protect the interests of shareholders, particularly the minority shareholders. He has to fulfill following criteria:

Let’s pause from companies act for a while. We know that

so, what does SEBI norms say about these independent directors?

Enough of directors, moving to next topic:

Board meetings- duration and quorum

just like parliament has PAC, estimate Committee, departmental standing Committee etc. same way, Companies will be required to make following Committees out of their board members

So far, we checked provisions related to directors and board meetings. Mock questions can be formed by twisting the facts, for example

Which of the following statements are correct as per the new companies Act?

Moving to next topic

After that cooling off period of 5 years.

Why? Well, same reason why Government officials should be transferred after 3-5 years so they don’t develop nexus with local thugs.

In other words, if any ministry wants to learn how to harass UPSC aspirants- they should take COACHING from babus @ministry of corporate affairs.

Let’s check their features one by one

Disputes where NCLT will adjudicate:

This is not a new thing. Already exists, But 2013’s act gives it statutory status, with following provisions

Under the new act, Companies will have to spend 2% of their last three years’ average profit on CSR activities. (e.g. schools, slum redevelopment, “chowkidari” to prevent junta from urinating/defecating around railway station etc.) 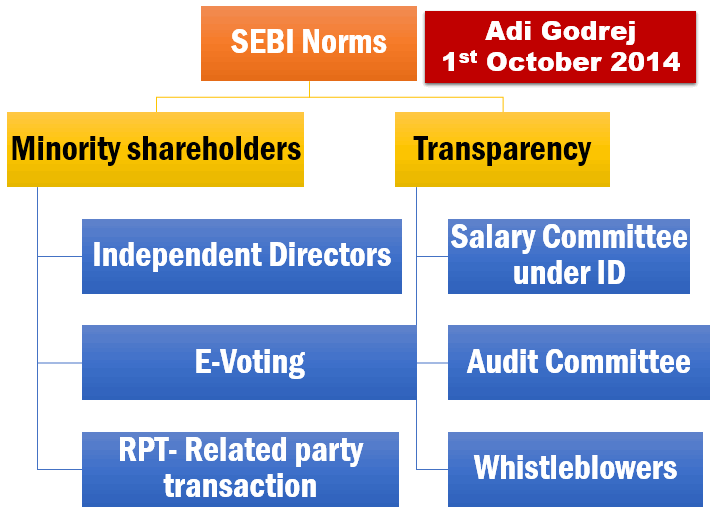 Lengthy topic, not important for prelims. But will be important for (MBA) interviews because this Maruti-Suzuki controversy will drag on for long.

So in this case, we’ve two parties

Now one party (Japan) is taking an action (of setting plant in Gujarat), which will have negative ramification for the investors in other party (Indian Maruti).

This is one type of “related party transaction”.

As per companies Act 2013, Related party transactions require voting-approval from majority OF the minority shareholders.Therefore, Suzuki has decided following: