CAPF Answerkey 2015: Polity Questions solved with Explanations, 11 out 19 from Laxmikanth, Focus on GK 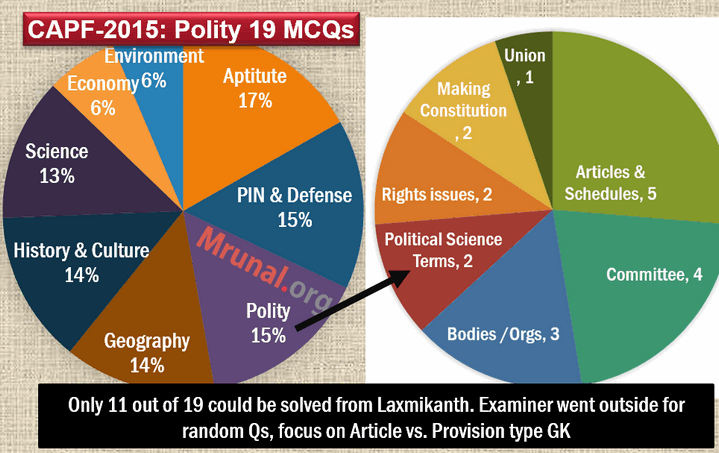 57. The 2nd Administrative Reforms Commission has produced Reports on :

125.Which of the following committee/committees submitted reports on Electoral reforms?

Select the answer using the code given below:

Balwant Rai mehta dealt with PRI bodies. So #4 is wrong, this eliminates A, B and D. we are left with answer “C”. Alternatively, refer to Law ministry webpage on electoral reforms at http://lawmin.nic.in/ld/erreports/er.htm

70. The Punchhi Commission report was related to :

Laxmikanth page 14.14: the second commission on Centre State relations was set up by the government of India in 2007 under the chairmanship of, Madam Mohan Punchhi -the former Chief Justice of India.

11. Which of the following reasons were cited by the Ashok Mehta Committee for the decline of the Panchayati Raj Institutions in India ?

IGNOU MPA-016-Unit-12: Committee outlined the reasons for the decline of PRIs haphazard programmes, non-performance, rise of vested interests, lack of adequate financial resources. The concept of PR itself got lost in a haze of conflicting interpretations. So, #3 is right. This eliminates option “A”

That means both #1 and #2 responsible.

Accordingly, by elimination, we get the answer C-only 1, 2 and 3.

10. The Rajya Sabha can withhold its consent to a Money Bill for :

Laxmikanth page 22.19 : if the Rajya Sabha does not return the money bill to the Lok Sabha within 14 days, the bill is deemed to have been passed by both the houses.

Laxmikanth- 15.2 and 15.3 discusses Inter-state council, from the given options, “B” is the most appropriate.

104. The Comptroller and Auditor-General of India can be removed from office only by :

Laxmikanth Page 45.1, Option “C” is most appropriate. Another source: Page 37, Machinery of Governance in India By Shriram Maheshwari
61. The National Human Rights Commission has :

Laxmikanth Page 50.1 : NHRC chairman should be retired chief justice of India.  So no provision for HC judge in chairman post. This means #1 is wrong and by elimination we are left with answer “D”.

2. The term “Congress System’ was coined by :

Answer- B. Rajni Kothari was a noted Political scientist, died in 2015, January. Kothari is associated with the coinage of the term “Congress system”. Ref: IndianExpress

4.The 9th Schedule to the Constitution of India was added by the :

Laxmikanth appendix 6: first Amendment act, 1951 – added ninth schedule to protect the land reform and other laws included in it from the judicial review.

53. Under Article 355 of the Constitution of India, it is the duty of the Union to:

Answer – A. Laxmikanth- Appendix I page A1.8

110. The Special Provisions in Article 371G of the Constitution of India relate to the state of :

116. The provision under Article 350A of the Constitution of India relates to the :

122. According to Article 3 of the Constitution of India, the Parliament may by law:

113. The locus standi rule to move the court was liberalized by the case of:

According to Page27-28 of this google book, answer is “C”

119. Which of the following are provided in India by the Right to Education Act ?

RTE salient features are given on http://mhrd.gov.in/rte

107. According to Granville Austin, which of the following was / were the most significant contributions of India to constitution-making?

118. The proposals of the Cabinet Mission did NOT include :

Bipan Chandra page 492 and Spectrum Page 229: Cabinet Mission plan rejected demand for a full fledged Pakistan. 1 and 2 are right, as per Spectrum page 229 and 230, so answer is “B”.