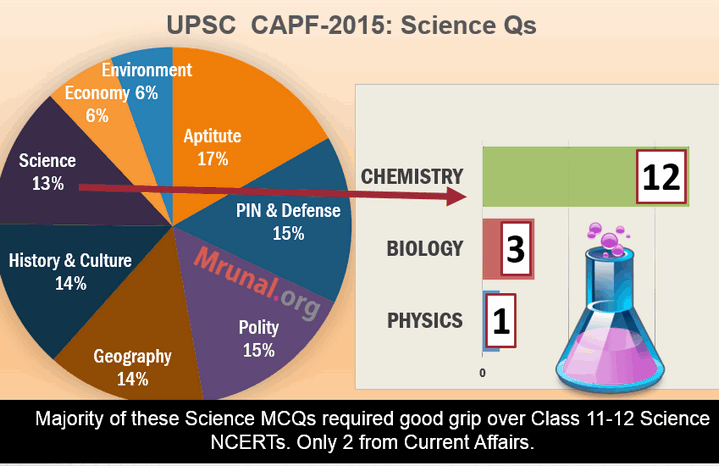 A CAPF aspirant can afford to “play” with Aag, Paani & Rajanbhai, because no questions asked from Banking sector

73. In January 2015, Government of India approved the establishment of a Neutrino Observatory at :

Statement I : Catalytic hydrogenation is highest when the catalyst remains in the powdered form

Statement II : When a catalyst is in the powdered form, its surface area becomes highest

21. Which one of the following statements regarding baking powder is NOT correct ?

26. Match List-I with List-II and select the correct answer using the code given below the Lists :

So answer is C.

38. Which one of the following statements is correct ?

Water of crystallisation is the fixed number of water molecules present in one formula unit of a salt.

That means Zinc and Iron sulphate have same no. of water of crystallization, therefore B is the correct answer.

81. The hydrogen atoms present in acetylene molecule are:

This google book says “Due to this hydrogen atom, acetylene is acidic in nature”. Hence answer “A”

82. Which one of the following compounds is NOT considered an acid ?

86. Movement of outer electrons in the inner orbits of an atom produces :

This google book says X-ray produced by this movement (although I’m not very sure if interpretation is right.) so for the moment, answer is “X-ray”

97. In a radioactive decay of a nucleus, an electron is also emitted. This may happen due to the fact that :

This google book says: radioactive decay in which an electron is ejected from the nucleus to convert a neutron into a proton, is called “Beta emission”. so Answer “B”. NCERT Class 12 Physics chapter 13 nuclei suggest similar.

32. Match List-I with List-II and select the correct answer using the code given below the Lists :

33. Hemocyanin is an oxygen-transport metalloprotein present in some invertebrate animals. This protein contains:

There are two copper atoms per molecule of hemocyanin says this google book, hence answer “B”. But who has time to prepare such minute detail *Bang head*.

39. Match List I with List II and select the correct answer using the code given below the Lists :

October 2014: India liberalized its defense and insurance sectors, raising foreign investment caps in both to 49%. Afterwards no further increase reported. So, Answer “B”

3. Under Section 10(26) of the Income Tax Act, which of the following category of people are exempted from income tax?

Hindu Novemer 2014 The tribals of five North-eastern states – Tripura, Manipur, Mizoram, Nagaland and Arunachal Pradesh – are fully exempted from tax under Section 10 (26) of the Income Tax Act, 1961. So “D” most appropriate among the given.

5. Which one of the following statements with regard to the Union Budget of India for the year 2015-2016 is NOT correct?

Hindustan Times says India’s defence budget has slipped to 1.74% of its gross domestic product (GDP), compared to 1.78% last year. Therefore, “B” is the answer.

12. Which one of the following statements with regard to the Saansad Adarsh Gram Yojana is NOT correct?

Indianexpress gives Modi speech ““On 11th October, the birth anniversary of Jaya Prakash Narayanji, I will present a complete blueprint of Saansad Adarsh Gram Yojana before all members of Parliament and state governments.” Therefore, “A” is the answer.

13. Which one of the following statements with regard to the ‘Make in India’ initiative of the Government of India is NOT correct?

That means DIPP under Commerce ministry implementing it. Hence “D” is the answer.

68. Border Roads Organization (BRO) is under the administrative control of the:

India yearbook 2015, Page 826: Ministry of road and highways is carrying out development and maintenance of national highways through 3 agencies (1) NHAI (2) PWD (3) BRO. So, answer “B”

Statement I: India’s share of world manufacturing output steadily declined during the 19th and the 20th centuries.

Statement II: There was no absolute decline in production in India during the colonial rule.

Unable to pinpoint exact statistical source. But, as per this google book says II is wrong, I is right so option “C”.

106. Which of the following statements with regard to construction of railways in colonial India by the British companies is /are NOT true?

Bibek Debroy interim report on railways, page 113- statement 1 is right. By elimination, we get the answer “A”.