[Prelim-2016] Is your Revision-ship sailing in the right direction? or just wasting time scavenging “material” from 50 sources? 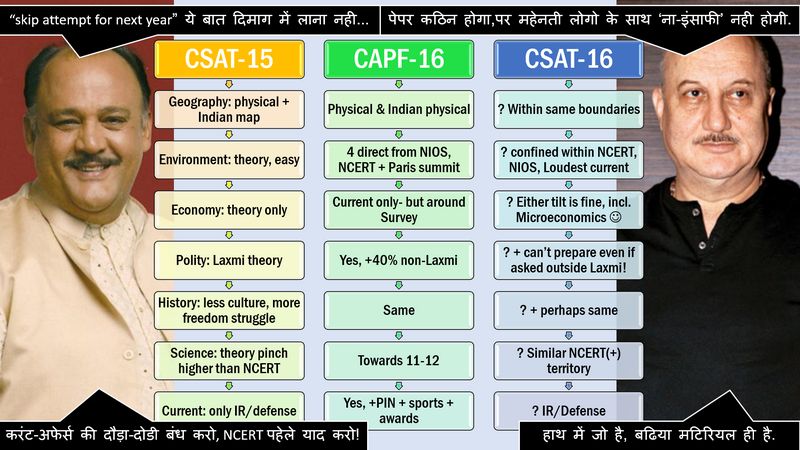 Polity: Laxmikanth and beyond

As usual, good number of Polity MCQ directly from Laxmikanth in CAPF-2016. But observe that focus is gradually towards “factual” information regarding dates and articles:

By and large factual MCQs are not difficult per se. But when you’re revising Laxmikanth, you’ve to wear googles accordingly.

Both in CDS and CAPF, ~40% of the Polity MCQs are asked from outside Laxmikanth i.e. From academic political science / UGC NET papers. But there is no need to worry because

Ans: A)1,2,3 B) 1 and 2 C) 2,3 d) 1, 3
This is verbatim lifted from India yearbook 2016 ch.19 industries page 557. Answer is “all of them correct”. Tough because in real exam, mind can get doubtful- whether KVIC produces saleable articles? Then it becomes difficult to go through elimination.

This is also verbatim lifted from India yearbook 2016 ch.19 industries page 555. Correct order is Mulberry>> Tasar >> Eri >> Muga.
Some of you may have mugged up that Mulberry(3) is highest and Mugha (2) is lowest. But still through elimination it leaves option A and B. Hence I call it a difficult one.

It’ll be a fruitless exercise to wade through all 1000+ pages of yearbook at the moment. But atleast you must do following chapters:
1,2,3,12,  19, 20, 21, 28.
For the remaining chapters, either A) I’ve covered important maal from it, if relevant from economy/infra/HRD point of view. Or B) cost:beneift less for 20 days. therefore, you may avoid.

Environment: NIOS+NCERT is Zindabaad, here’s why

2014 was a curious year, for UPSC went crazier than usual in asking technical-tough questions from environment and agriculture. But since prelim-2015, normalcy has returned and its continuing till CAPF-2016. Four easy and two tough questions asked. Observe.

Looks tough? No it’s not. Because As per NCERT Science Class 7 Ch.1, Pitcher plant is carnivore. And Sandlewood can’t be carnivour. Hence by process of elimination the answer is A)
Easy MCQ No.4: They asked correct sequence of Taxonomy hierarchy from NCERT Class-12 Biology. I’m not writing question, just mugup this chart sequence from same book-
Species=>Genus=>Family=>Order=>Class=>Phylum(division)=>Kingdom.

Lesson: NCERT and NIOS has to be in the priority revision for environment. While for random current affairs/yearbook type info. The cost:Benefit bad so no point scavenging around.

Geography: India and Physical as usual

Chemistry: NCERT Zindabaad, here is why

Following are the MCQs UPSC asked in latest CAPF, and pretty much all of them from NCERTs

Hardness of minerals from NCERT Geography

Looks random? No, it is almost verbatim from Physical geography class11, chapter 5 “Rock an minerals”. Observe following screenshot.
Point being: Every year, in every exam of UPSC- at least one question comes from Class-11 Physical Geography. But often enthusiastic students divert more of their energy in scavenging for new material/current affairs rather than revising what they already have.

Physics: NCERT is Zindaabad & here’s why

In CAPF-2016 they asked following topics

The good thing about Science (theory) MCQs= if you solve 4 old questions, you can gather enough information to solve fifth question.

This question is almost vertibm prepared from the exercise Q.4.3 given in NCERT Class-11 Physics ch4. Observe this screenshot

Anyways, I’ve created the list of scalar and vector from that chapter for your quick reference:

Mind it: Magnetic flux is scalar while magnetic field is vector. And so many other confusing-tricky terms. So unless you can memorize fully, leave it, else high risk of ticking wrong answer
Gravitational Wave- memorize this
This topic sporadically keeps appearing both in UPSC and in Hindu. I’ll not go into the MCQ but rather, let’s just mugup the true statements.

Within biology portion- they ask questions from zoology and botany- but i put them under “environment” so, here we are left with medical/human health only
DNA subunit is called ___
Vaccination involves ___ principle (antibody injected / product or xyz)
Match isotope vs. Applications (verbatim given in NCERT class7)
Zika: wrong statement
Let’s check the last two

This is given verbatim in NCERT Science class-9, ch4, page 53.
You can mugup one more fact: Iodine125 = eye cancer treatment. (because BARC working on it, says India Yearbook-2016.)

Just like last IAS-Prelims, they asked good number of questions from British India/Freedom struggle, and with a bit diluted difficult. Above MCQs can be solved easily via Spectrum / Pratik Nayak / Class-10 Tamilnadu.  (and hopefully similar scene should prevail on 7th August)

But that 90s era is long gone. Thanks to numerous blogs, websites, forums- now everyone knows everything and has everything. So, whether you’re in Kashmir or Kanyakumari- you’re not handicapped by your location but by your laziness.

#5: don’t get demoralized by online brigade

While online blogs, websites, forums are a blessing against information asymmetry of Delhi vs outside. But same online things also have negative aspects:

#6: Doing more and more of less and less

#7: Attempt must be given

As I’ve rambled repeatedly throughout this article- current affairs comes as last priority, after you’ve done good grip over theory.

Appendix: only for future CAPF/CDS aspirants

Here are the MCQs from CAPF-2016- so you may focus on similar info. in future

here are the type of questions asked in CAPF-2016-so, for the future CAPF/CDS/Bank exams, you can focus on similar type of details while preparing current affairs.