We can classify them into three levels:

Although in real exam, to save time, you have to only decode the first two and last one alphabet and by elimination you’d arrive at answer “4”.

Q) Out of four cities given below three are alike in some manner while the fourth one is different. Identify the odd one 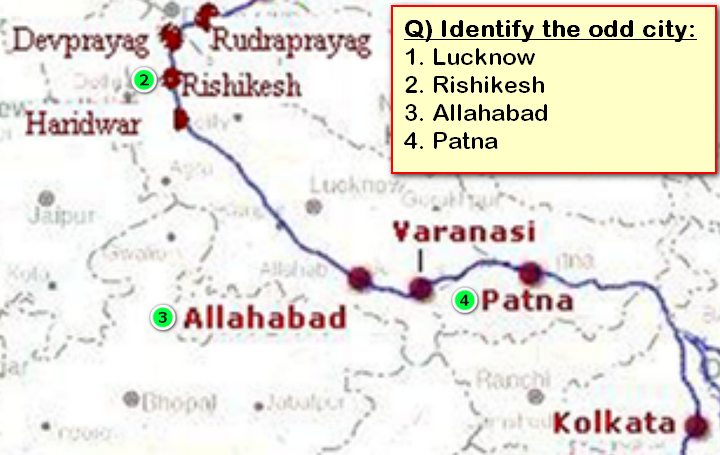 Q) Given below are two premised (a) and (b). from those two premises four conclusions i, ii, iii, iv are drawn. Select the code that states the conclusions validly drawn from the premises (taking singly or jointly)
Premises:

Hence statement-(i) follows. By elimination, we are left with answer 1.
Now just to cross check whether statement (ii) also follows (singly).
All hot pans are untouchable (universal positive-A)
As per the rules of conversion given in M.K.Pandey’s book analytical reasoning  on Page 307,
“A” converts to particular positive (I).
So,All hot pans are untouchable  -> some untouchables are hot pans. So yes (ii) also follows. Therefore, answer is 1-(i) and (ii) follows.

Q) If the statement ‘None but the brave wins the race’ is false, which of the following statements can be claimed to be true?

Given statement None but the brave wins the race
We’ve to reduce this ‘exclusive proposition’. Ref M.K.Pandey’s page 311, table 5.
Accordingly, we can write the same statement as:
all brave are winners.
So if this statement is false then
All brave are not winners=> meaning, some person who win the race, are not brave. Hence answer-2.

Q) If two standard form categorical propositions with the same subject and predicate are related in such a manner that if one is undetermined the other must be undetermined, what is their relation?

Q) Men and women may have different reproductive strategies but neither can be considered inferior or superior to the other. any more than a bird’s winds can be considered superior or inferior to a fish’s fins. Select the code that states those two propositions

Trying to explain difference between men and women by giving analogy with birds and fishes. Hence analogical proposition

Q) Among the following propositions two are related in such a way that they cannot both be true but can be false. Select the code states those two propositions
Propositions:

I’ve already labelled the statement types in the question itself.
We’ve to cross check this with “Square of opposition”
The rule is-  “for Contraries i.e. universal positive (A) and universal negative (E): cannot both be true but could both be false.”
Hence answer is 2- “a and c”

Seems these uncle-ji professors are framing reasoning & communication MCQs from their own unpublished and unsubstantiated research papers. Multiple answers are correct depending on which book / source you’re referring to. For example

Any corrections in the Answerkey? Do post in the comments but with authentic reference and explanations.
Visit Mrunal.org/UGC for more study material and solved papers for UGC-NET / JRF exam.