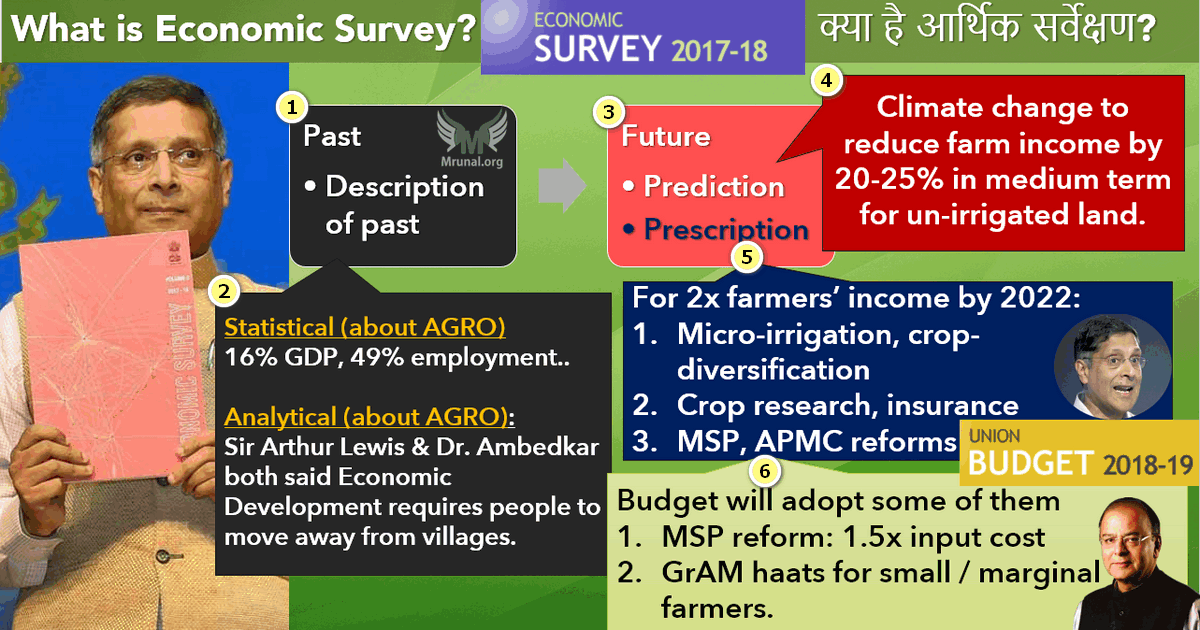 1) Description of the past

2) Prediction and Prescriptions for Future

Government takes cognizance of the survey, and announces schemes accordingly. The latest budget 2018 – 19 agreed that:

Since economic survey deals with Economic issues, it is prepared in the Finance Ministry. But, Which department exactly? Following list gives FinMin’s departments and MCQ-worthy tasks / people associated with them: 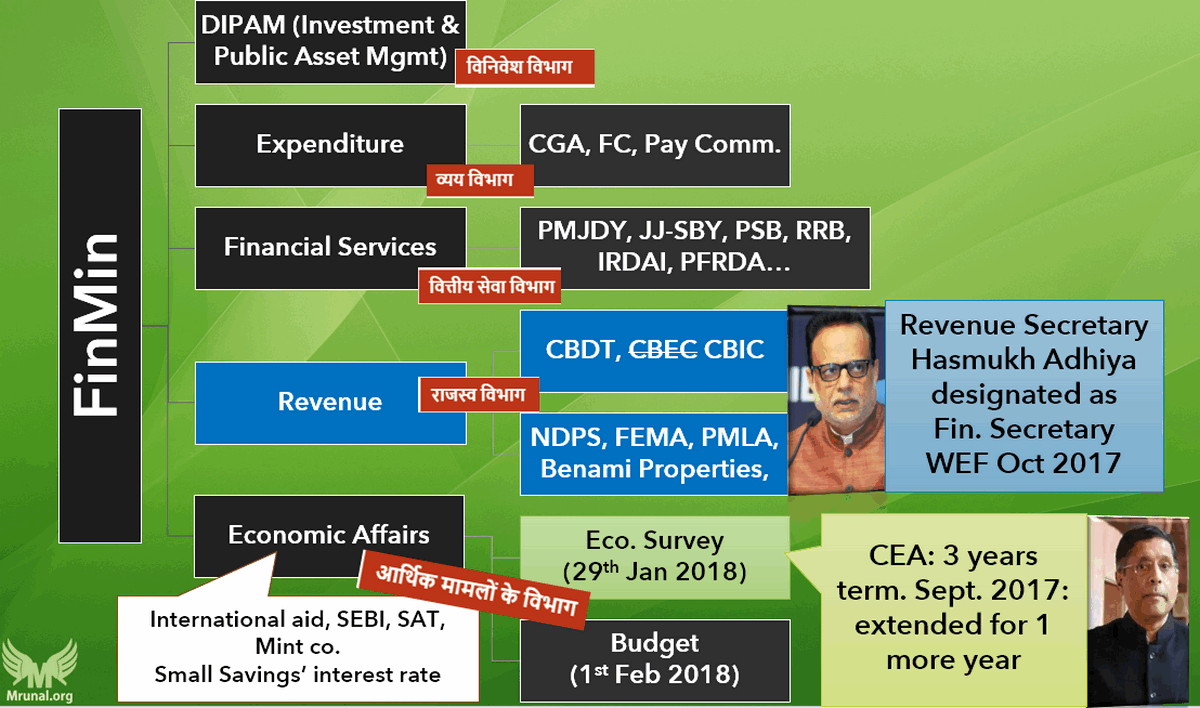 don’t waste time memorizing above months. I only wrote them to provide a chronological perspective.

Ofcourse, CEA himself will not type all 700+ pages by himself. He has assistance of the IES officers in DEA to draft it. The Draft economic survey is then approved by Finance Secretary -> Finance Ministry.

What is the structure of Economic Survey? (कैसा दीखता है?)

To know the motive behind pink cover, we’ve to read the PREFACE of Volume1. It’s specifically mentions that:

….The color of this year’s survey cover was chosen as a symbol of support for the growing movement to end violence against women, which spans continents. – Arvind Subramanian (Chief Economic Adviser).

When I asked this MCQ in the live lectures:

If you could confidently eliminate 2 out of 4 options in an MCQ, and then applied such Guessmaster-giri then, (1/3rd negative marking vs 1/2 chances of getting right answer which is in the ‘zone of consideration‘), and repeated this process for another 10-15 MCQs then by the “Law of averages” you might score in positive figure.

(Mock MCQ) Which of the following abbreviations are correctly paired?

HINT: This is your homework- Read the abbreviations in original PDF.

“Listicle” is a type of article with a list of interesting information, like “10 ways to become rich”, “5 reasons why jiophone is better than iphone”, “10 coaching classes of Delhi who’ve historically looted and misguided IAS aspirants” and so forth.
January 2017: The Economic Survey 2016-17 volume1 gave 8 Interesting facts on Indian economy after the preface. (So, this was the first time ‘listicles’ started in the Economic survey), viz.

9th Interesting fact: While Mrunal doesn’t think this stale list will be asked in future exams but has given the list here as some examiner might use it to add “factually correct” wrong options.

Apart from this, vol1 chapter1 contains some ‘boxes’ detailing economic-concepts, graphical analysis etc. and analytical fodder for Mains. We’ll study them in appropriate pillars. so, far we’ve reached upto page no. 31 of Volume1. In the next article, we’ll move further to see the gist of remaining chapters.

Q. Under our Constitution, which of the following reports have to be tabled annually in the Parliament? 1. Recommendations of Finance Commission 2. Minutes of the GST council 3. Economic Survey of India
Answer Codes:
A) Only 1 and 2
B) Only 2 and 3
C) Only 1 and 3
D) None of them

HINT: Is FC constituted annually or at every five years? Is the term “Economic survey” even mentioned in Constitution?

HINT: DIPP under The commerce ministry looks after the foreign trade policy. Rest info given in this article’s section “Who prepares the Economic Survey?”

Q. Dept. of Financial services looks after the matters related to:

HINT: EPFO falls under Ministry of Labour and employment.

Q. Economic Survey 2017-18 has highlighted which of the following interesting facts about India?

Q. Policy prescriptions given by the latest Economic survey 2017-18 are:

HINT: Like Gotham, AirIndia is beyond savings, hence Survey recommending its privatization, then it couldn’t have asked Government to give more capital! Arvind S. said Government shouldn’t use blunt instruments and founding interesting listicle #9 that Indian State and local bodies collecting less direct taxes than their counterparts in Brazil, Germany, so indirectly he’s hinting they need to get more strict!

HINT:
Highway Robber (pointing a gun): Give hint for this MCQ please.
Quickgun Murugan: Instead of preparing for IAS, you better operate an S.T.D booth I say.

Q. The Budget-2018 has proposed to rename CBEC:

HINT: same as above.
I can draft even more MCQs but not doing it for the lack of time. Besides, by now you should have gotten the idea of what type of information is MCQ worthy and what is not? For the same reason, I’ve deliberately omitted many factoids and analytical points from Vol1ch1, because while they could be important for RBI grade “B” and IES or even Economics Optional Subject in IAS but not for the General Studies.