In the recent years, the number of geography MCQs in UPSC Prelims has been falling because:-

As a result, the quantity of geography MCQs is reduced to barely single digit number in the latest three exams (2016, 2017, 2018.)
In 2018, barely 4 MCQs from geography. This quantity is so insignificant that it is futile to find a pattern e.g, “unlike last year rivers and tributaries were not asked, unlike last year, nothing related to monsoon / atmosphere asked etc. 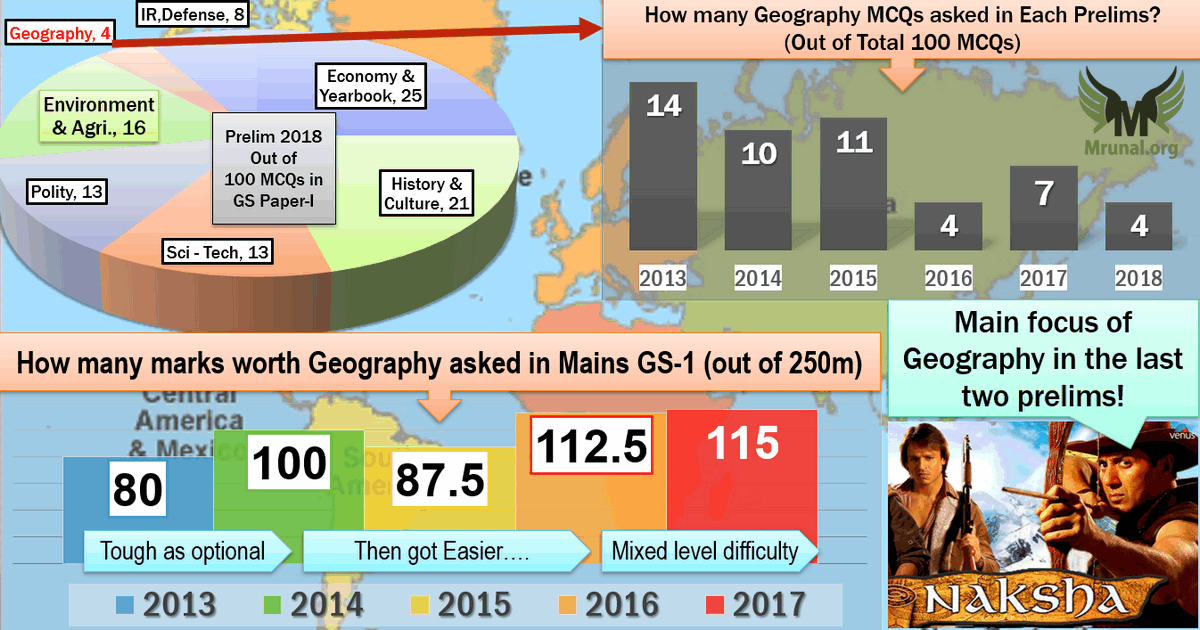 Solution / Answerkey for Geography in Prelims-2018

Difficulty: Tough because at max, you can eliminate that Kolleru is natural, but afterwards, Guessmastergiri Not Possible.

Answer: – A) Kodaikanal has 154-year-old, artificially-built lake. (Ref: TheHindu Lifestyle page article in 2017, April.) – B) Kolleru Lake Situated in Andhra Pradesh, it is the largest fresh water lake of India. It is located between the deltas of the Krishna and Godavari rivers in the Krishna and Godavari districts. The lake serves as a natural flood-balancing reservoir for the two rivers, it’s also a Ramsar convention site. (Majid P3.35) – C) Nainital is situated in the foothills of the Himalayas, with the pear-shaped Naini lake at its centre. [So, now Hairsplitters can find fault in the option that UPSC examiner has wrongly used the word “Nainital” instead of “Naini”] – D) Renuka Lake Situated in the Siarmaur district of Himachal Pradesh, this lake has been named after the goddess Renuka. A lion safari and a zoo are major attractions at Renuka. It is a site for the annual fair in the month of November. (Majid p3.36)

Guessmaster-giri TM is Possible, if you go by GM-Rule#1 that in UPSC MCQs, all statements with dates, numbers, figures are usually wrong, then both 2nd and 3rd statements ought to be wrong, thus you directly get the answer.

Difficulty: Medium to Tough depending on your seniority and optional subject.

Guessmaster-giriTM is Possible, if you go by GM-Rule#1 extreme worded statements are wrong, then first and second statement ought to be wrong, thus you directly get the answer.

Q74. Among the following cities, which one lies on a longitude closest to that of Delhi? (Pre18 Set-D)

Difficulty: Tough, because at maximum Pune can be eliminated, as it’s far away from Delhi-walli verticle line.

Answer: City’s coordinate figures will very depending on which site you refer to, so to maintain uniformity, I’ll use single site to fetch all coordinates- https://www.mapsofindia.com/lat_long/

UPSC also asked about location of Aleppo, Crimea etc. “places in news” but I count them under International Relation (IR), so you’ll find their answerkey in the IR-section.