International Relation (IR) was NOT EASY in Prelims-2018 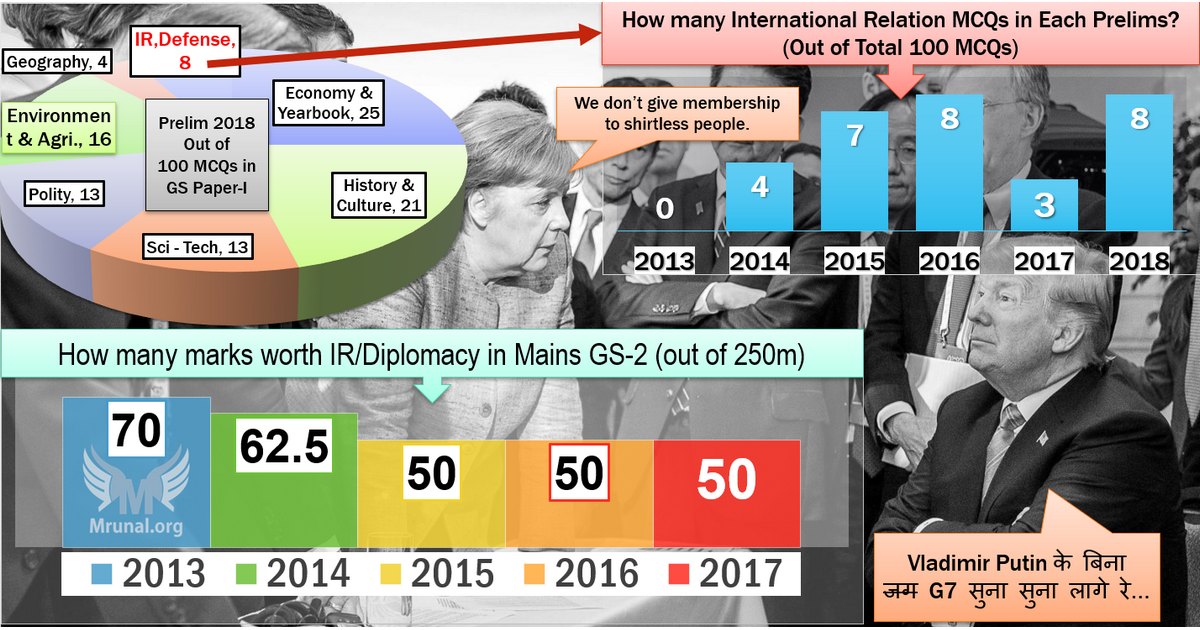 Total 8 MCQs, out of them 6 are of medium to tough level of difficulty. So, overall IR/diplomacy was not an easy section, for three reasons:

Strategy for IR for Prelims and Mains

IR section was not easy, but at the same time questions didnot fall from sky. Observe the source of my answerkey: 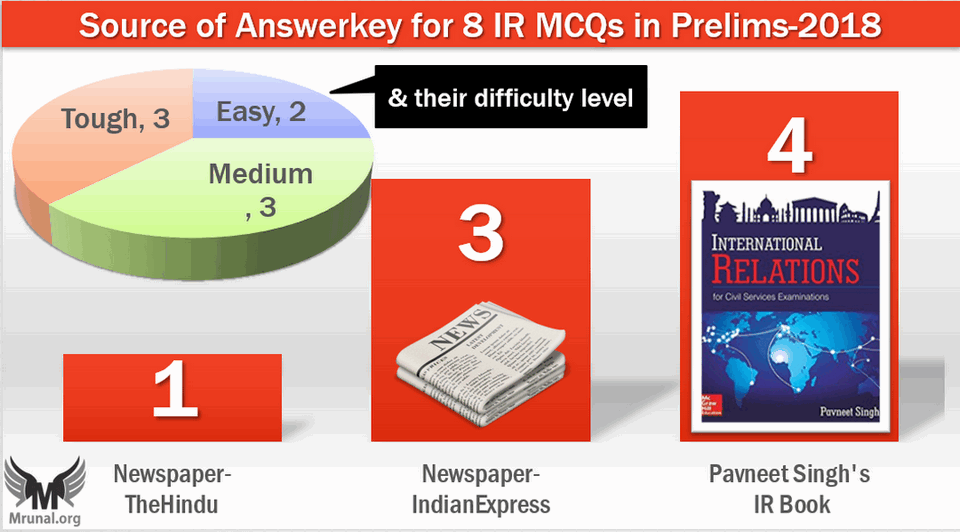 Don’t turn into an IR-LOVER

UPSC is for killers and not for lover. (आशिको का इधर कोई काम नही है.) Still, those with IFS as 1st preference- they get obsessive about studying IR / diplomacy and those with IPS as first preference obsessively study Internal security / terrorism topics. Both parties forget that:

Accordingly, the examples of poor strategies are:

Q88. In the Indian context, what is the implication of ratifying the ‘Additional Protocol’ with the ‘International Atomic Energy Agency (IAEA)’ ? (Pre18 Set-D)

Difficulty: Tough, because candidates primary focus had been on NSG / MCTR related current affairs last year, so unlikely that they’d follow through this much details.

From this description, C and D are irrelevant, and B is wrong. Thus we are left with answer A.

Guessmaster-giriTM doesn’t help arriving at right answer, It can only help upto elimination of optionD- because optionD has extreme worded statement “Automatically” so, it has to be a wrong statement according to GM-Rule#1.

Q22. What is/are the consequence/consequences of a country becoming the member of the Nuclear Suppliers Group’? (Pre18 Set-D)

Difficulty: Easy for senior players, and anyone who follows IR developments even in casual manner.

Guessmaster-giri TM possible, if we go by GM-Rule#1, extreme worded statements are automatically wrong, then #2 ought to be wrong, as it has extreme word ‘automatically’. Ofcourse, then statement#1 will also be wrong for the words “latest and most efficient”, but by GM-Rule#5: “word association”- since question says nuclear suppliers group, therefore statement#1 (access to nuclear tech) is likely to happen. Thus you get answer A: only 1.

Difficulty: Tough because unlike HDI, hunger, happiness or ease of doing biz. report, this one is not highlighted in a grand manner by all newspapers. Guessmaster-giri TM also not possible since all options have words associated with human rights / justice which is associated with rule of law.

Answer: Topic was in news during 2018-March.

The World Justice Project released its Rule of Law Index 2017-18 report, which measures the extent to which 113 countries have adhered to the rule of law in that period. (India’s rank was 62, better than China, Pakistan, Myanmar and Bangladesh; Denmark occupied the top spot. Ref: TheHindu

Now, let’s look at other options, to gain some more knowledge:

Which of the pairs given above are correctly matched ?

Difficulty: Easy for senior players, and anyone who follows IR news even on casual basis- If you just know about Catalonia and Crimea, you can get right answer.

Q63. Very recently, in which of the following countries have lakhs of people either suffered from severe famine/acute malnutrition or died due to starvation caused by war/ethnic conflicts ? (Pre18 Set-D)

Difficulty: Tough because in real-exam stress, you can have second thoughts about areas mentioned here.

Q69. The term “two-state solution” is sometimes mentioned in the news in the context of the affairs of (Pre18 Set-D)

Difficulty: Medium because as such serious candidates would have prepared India-Israel deals during Modi visit-2017 but this “two-state solution” is a bit faded old topic.

Answer: Pavneet Singh’s IR Book Section-H Ch1: Issues in the Middle East: Palestine under Israeli control to advocating the two states solution. It wants the creation of Arab Palestine state in the Gaza strip and West Bank, along side the state of Israel. (page H11)

Guessmaster-giri TM doesn’t help, because by GM-Rule#5 “Word association” even China could be the answer in context of Taiwan / Tibet.

Which of the pairs given above are correctly matched?

Difficulty: Medium because Aleppo= Syria and Mosul = Iraq is known to every one who follows Middle East IR-current affairs even in casual manner, but these two factoids alone don’t help reaching the right answer.

GM-Rule#5 “word association” doesn’t help. Because Mazar-i-Sharif sounds Islamic name but it could have been in Pakistan also.

Difficulty: Medium, because this is not an Indian missile, and N.Korea-USA news items had become so frequent that candidates would have stopped following ball-by-ball.

Answer: The THAAD system is designed to intercept and destroy short and medium-range ballistic missiles during their final phase of flight. USA installed this system in South Korea in 2017, in the wake North Korean missile tests. But this angered China, who feels that deployment of American armaments will upset the regional security balance. [Ref IndianExpress May 2017]

GM-Rule#5 “word association”: “area defense” : radar alone can’t provide defense, and geographically Japan-S.Korea are not ‘high altitude countries’, so it has to be an anti-missile program. But it only narrows down the choice between “B” and “C”- doesn’t help arriving at right answer.