HINT: Union Government setup this body under SC directive. Chairman selected by the Union Government for five years. This authority covers aforementioned states plus Puducherry. Mind it- you’ve to select wrong statement, not the right one!

Q. In 2018-July, Home ministry officials were trying to work out peace and rehabilitation deal for the Bru (Reang) refugees. Who are these refugees?

HINT: Originally from Mizoram, but living in Tripura since 1997 due to conflict with the Mizo tribe. You can read more about them in the IndianExpress Explained series.

Q. In 2018-July, Lok Sabha passed RTE amendment Bill 2017. What is the primary objective of this bill?

HINT: Under the original Right to Education Act, 2009, no child can be failed till class 8. So, children didnot take studies seriously, and therefore parents in Gangetic belt were forced to become SPIDERMEN to help them cheat in the board-exams. So, bill aims to remove the “no-detention policy”. State Government can organize exam at class 5 and 8, if child fail, there will be re-test, if he fails second time also then he’ll be ‘detained’ in that class.

Q. In 2018-July, SC is hearing a PIL about the entry of women in the Sabrimala temple. Find correct statement(s) about this temple:

HINT: It’s in Kerala’s Periyar Tiger reserve, but dedicated to Lord Ayyappa- who is an incarnation of Vishnu and Shiva. Padmanabha temple is also in Kerala, but in Thiruvananthapuram. 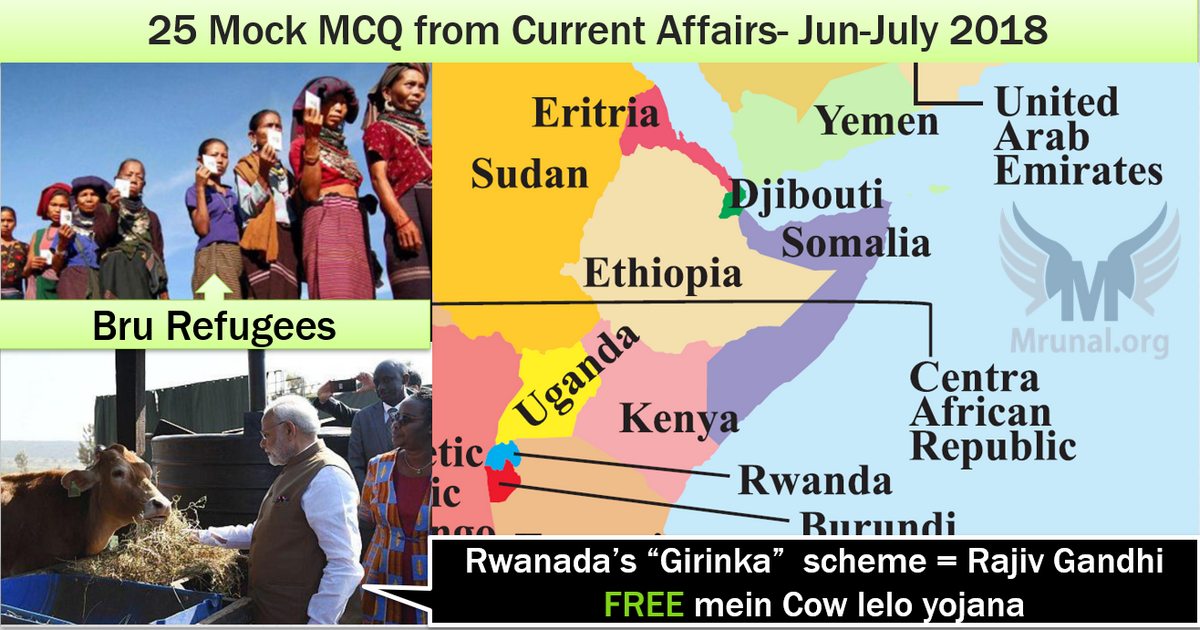 Q. In 2018-July, PM Modi went on for tour to Uganda. Find correct statement(s) about this country:

HINT: Topic in news because Government has told SC that #2 will be done, and #1 is already done. You can read the background theory in my article.

Q. Who among the following has been appointed as the Chairman of NGT?

HINT: Topic in news because Union minister Paswan has opposed the appointment of Justice Adarsh Goel as NGT chairman, because he had delivered the verdict about dilution of SC/ST atrocities protection act.

Q. What is the geographical significance of June 21st?

Q. In 2018-July, Government of India invited applications for “Inspire Award- MANAK”. What is it?

HINT: Innovative ideas from class 6 to10 students, to solve societal problems through science and technology. Award funded by the National innovation foundation under Science Tech Ministry.

HINT: Arbind Modi is a member of CBDT- his direct tax task force was made in 2017-November. Injeti Srinivas- the secretary of Ministry of Corporate Affairs, his 10-member panel is to review the penal provisos of the Companies Act. Topic in news because Injeti Committee was setup in 2018-July.

HINT: After GST Council’s latest meeting, following items put under 0% slab: Sanitary napkins; rakhis; marbles, stone and wood deities; fortified milk; Raw material used in brooms; Saal leaves; Coir pith compost. Apart from this, many reductions made in other commodities as well, but we should mainly focus on 0% walli things. Because in UPSC Prelims-2018 also they asked a similar MCQ.

Q. In 2018, the scientists from the Physical Research Laboratory, Ahmedabad, became the first Indians to discover an exo-planet, from Mount Abu Observatory. What do you understand by the term ‘Exoplanet’?

HINT: An exoplanet or extrasolar planet is a planet outside our solar system.

Q. In 2018-Jun, security forces decided to install RFID tags in the vehicles of the pilgrims travelling to Amarnath Yatra. What is RFID?

HINT: I’ve kept all statements correct so you can paste this in descriptive answers about RFID in UPSC Mains GS Paper3 and other StatePCS exams.

HINT: formalin / Formaldehyde is a carcinogenic (Cancer causing) preservative used for storing biological specimens in laboratories such as frogs. Unscrupulous fishermen use it to extend the storage life of fishes. Even in W.Bengal assembly this controversy erupted that State Government is protecting ‘Fish-Mafia’, instead of taking action against them.

Persons in News and Sport section as such irrelevant for UPSC IAS exam, but important for non-IAS exam.

Q. Niiky Haily came to India in 2018-June. Find correct statement(s) in this regard.

HINT: Nikki Haley / Nimrata Randhawa is an Indian origin politician from Republican party, who served as governor of the South Carolina, and presently US Ambassador to UN. The present Secretary of State of USA is Mike Pompeo. Secretary of State looks after US’s foreign relations, so he/she will be equivalent to Indian External Affairs minister, not Home Minister.

HINT: Vikram Chandra, an Indian-American writer’s novel ‘Sacred Game’ is about cops and gangsters in Mumbai. It’s in controversy because of anti-Rajiv Gandhi remarks made in the serial.

HINT: 21st June selected by UN General Assembly. 2018 theme is ‘Yoga for Peace’. PM performed at Dehradun, Uttarakhand, besides, Shimla is in Himachal!

Q. Which of the following system(s) was / were utilized in the FIFA Football cup held at Russia in 2018?

HINT: In Football, VAR is used for video replays to help on-field football referees. Whereas in Cricket, umpire Decision Review System (DRS) is used to ascertain whether batsman is out or not. DRS consists of three things:

Q. Hima Das won a gold medal in the IAAF tournament in 2018-July. Find incorrect statement(s) about her:

HINT: She’s the first Indian to win it.