Only Aral Sea is shrinking 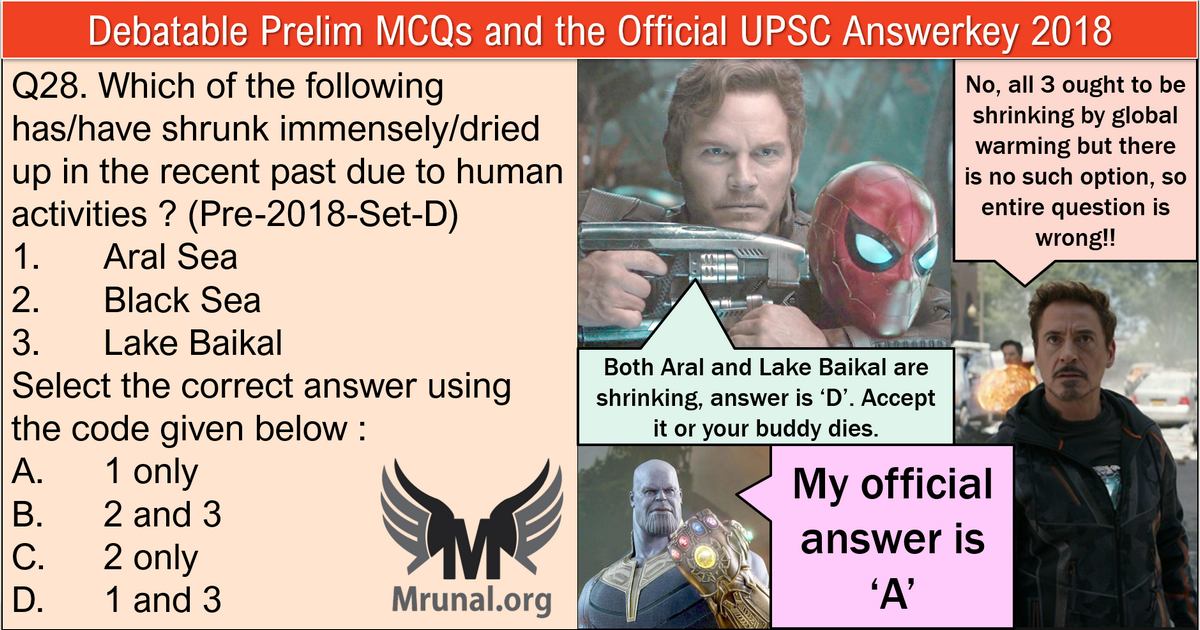 Q28. Which of the following has/have shrunk immensely/dried up in the recent past due to human activities ? (Set-D)

Official UPSC Answer – A: only Aral Sea is shrinking.

Eggs cooked in 5 star hotel not subject to GST 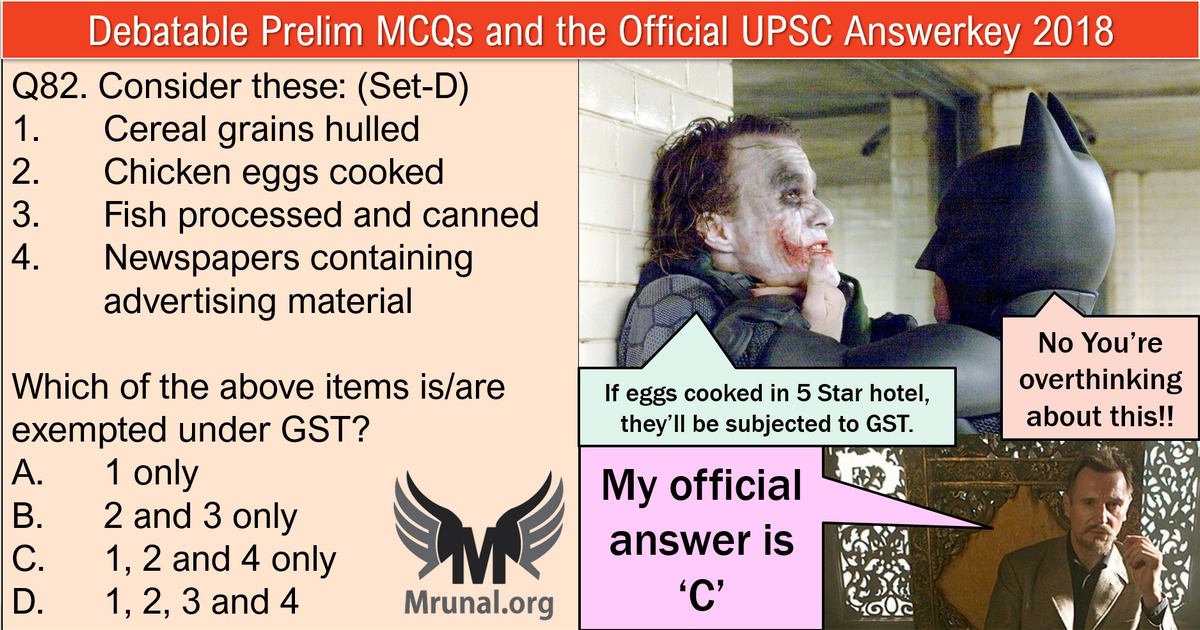 Which of the above items is/are exempted under GST (Goods and Services Tax)?

Is Throne a leaf modification?

Q17. Which of the following leaf modifications occur(s) in the desert areas to inhibit water loss? (Set-D)

Q87. With reference to the election of the President of India, consider the following statements: (Set-D)

Which of the statements given above is/are Correct?

Q12. With reference to the cultural history of India, consider the following statements : (Set-D)

Q86. Regarding Money Bill, which of the following statements is not correct? (Set-D)

Depending on how you interpret these provisions, your answer may vary.

Q32. If a commodity is provided free to the public by the Government, then (Set-D)

Q34. Consider the following statements: Human capital formation as a concept is better explained in terms of a process, which enables (Set-D)

New NCERT Std. 11, Introduction to Indian Constitution Page 66 and 67 mentioned that right to vote is a Constitutional right, whereas certain SC judgements saying it’s a legal right / fundamental right. So, accordingly experts were divided over A, C and D. UPSC kept C is the official answer. 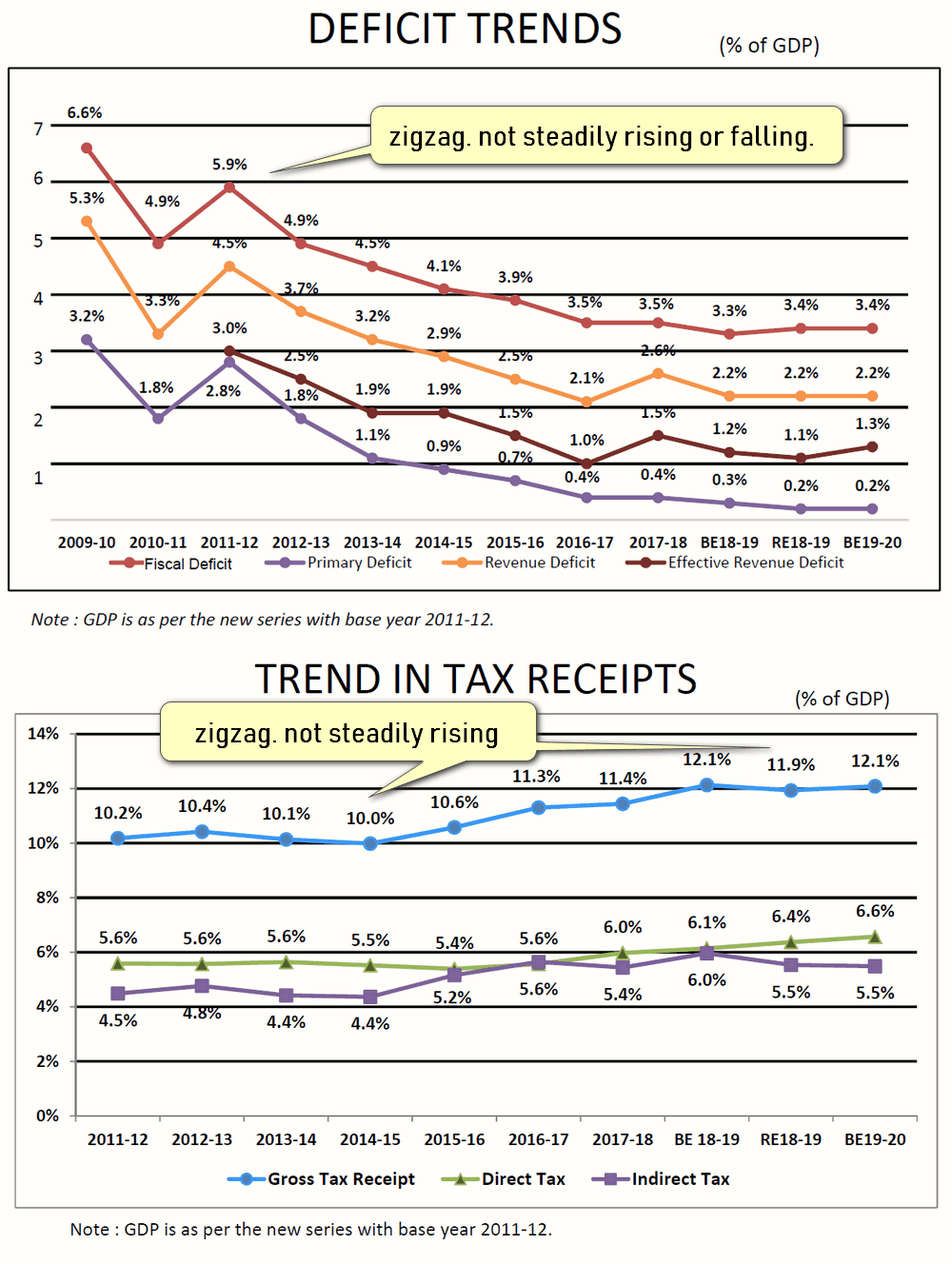 If we look at the overall trend from 2007 to 2017 there is gradual increase but on yearly basis there have been ups and downs. So, debate wars were about the interpretation of the word ‘steadily’.

98. Which of the following are the objectives of ‘National Nutrition Mission’? (Set-D)
1. To create awareness relating to malnutrition among pregnant women and lactating mothers.
2. To reduce the incidence of anaemia among young children, adolescent girls and women.
3. To promote the consumption of millets, coarse cereals and unpolished rice.
4. To promote the consumption of poultry eggs.
Select the correct answer using the code given below:
(a) 1 and 2 only
(b) 1, 2 and 3 only
(c) 1, 2 and 4 only
(d) 3 and 4 only

21. Which of the following practices can help in water conservation in agriculture? ‎(Set-D)
‎1. Reduced or zero tillage of the land ‎
‎2. Applying gypsum before irrigating the field ‎
‎3. Allowing crop residue to remain in the field ‎
Select the correct answer using the code given below : ‎

Harappans did not know about the horses

Official UPSC Answer –C: Harappans did not know about the horses

(Series-A) Q21. Due to some reasons, if there is a huge fall in the population of species of butterflies, what could be its likely consequence/consequences?

While majority of the unofficial answerkey were unanimous that it was “C”, but some candidates were doing hairsplittery by using random websites / pdfs and Birbal-ki-khichdi like logics on how butterfly genocide leads to drastic fungal infection.

(Series-A) Q40. What is the purpose of setting up of Small Finance Banks (SFBs) in India?

While majority of the unofficial answerkey were unanimous that it was “A”, but some candidates were doing hairsplittery about third statement that it is also right like Birbal-ki-khichdi- Small finance banks will encourage young entrepreneurs to setup biz in rural areas.

29. Which of the following statements is/are correct: Proper design and effective implementation of UN-REDD+ Programme can significantly contribute to (SET-D)
1. protection of biodiversity
2. resilience of forest ecosystems
3. poverty reduction
Select the correct answer using the code given below.
(a) 1 and 2 only
(b) 3 only
(c) 2 and 3 only
(d) 1, 2 and 3

As per the FAO webpage of UN-REDD+ program, the explicit objectives are 1) reduce GHG emission by halting deforestation 2) increase GHG removal by expanding forest. So, accordingly, benefit statement 1 and 2 are directly linked. While REDD++ can help removing the poverty (statement3), albeit in an indirect manner. Besides some google books even said REDD++’s implications for poverty alleviation at the local level remain unclear.

So, after the exam, people were divided between A and D.

Based on Kurukshetra magazines and Tamilnadu Agriculture University pages

84. Regarding the taxation system of Krishna Deva, the ruler of Vijayanagar, consider the following statements : (Set-D)
1. The tax rate on land was fixed depending on the quality of the land.
2. Private owners of workshops paid an industries tax.
Which of the statements given above is/are correct?
(a) 1 only
(b) 2 only
(c) Both 1 and 2
(d) Neither 1 nor 2

No authentic source / routine book mention specifics of Krishna Deva’s Taxation system. But from Indian History by Krishna Reddy, we find that in Vijaya Nagar empire:

GuessmastersTM may even suggest that in debatable questions the official answer is usually ‘C’, but such metakeyword analysis is surest way to dig your own grave. Besides, you can’t really know whether a particular answer is ‘debatable’ until you come out of the exam hall and refer to multiple private answerkeys & engage in comment-wars!

Which private answerkey was most accurate for UPSC Prelims in last 3 years?

Best wishes to serious players for the Prelims-2019 this Sunday.