Observation / Analysis about Sci-Tech in Prelims-19 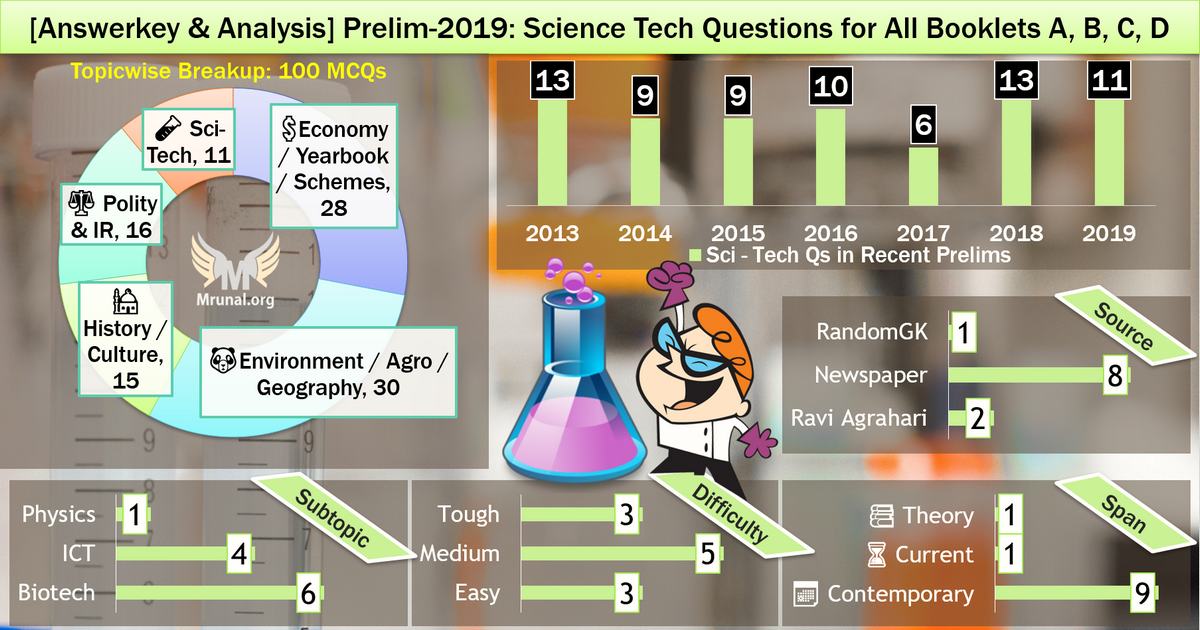 While preparing science Current/Contemporary affairs, the target areas should be: Environment, Agriculture, Public Health, Biotech, ICT/communication and Space. Within Space, first priority to ISRO than NASA, then other countries and lastly to the randomly discovered stars and planets.

To conclude, there is no rocket science or secret formula to crack the science questions in IAS prelims. You prepare what you can, and then focus on the other subjects.

(Pre19-SetA) Q92. The word ‘Denisovan’ is sometimes mentioned in media in reference to
(a) fossil of a kind of dinosaurs
(b) an early human species
(c) a cave system found in North-East India
(d) a geological period in the history of Indian subcontinent

Difficulty: Medium to Tough depending on how keenly you follow newspaper for science tech affairs, because it’s not given in most of the current compilation PDFs or Science books for competitive exams.
ANS:

(Pre19-SetA) Q93. With reference to the recent developments in science which one of the following statements is not correct?
(a) Functional chromosomes can be created by joining segments of DNA taken from cells of different species.
(b) Pieces of artificial functional DNA can be created in laboratories.
(c) A piece of DNA taken out from an animal cell can be made to replicate outside a living cell in a laboratory.
(d) Cells taken out from plants and animals can be made to undergo cell division in laboratory petri dishes.

Difficulty: Tough. Verbatim answer not given in routine preparation sources. Look like some Biotech Professor put it there just to ‘tease’ students.
ANS:

(Pre19-SetA) Q98. Which of the followings are the reasons for the occurence of multi-drug resistance in microbial pathogens in India?
1. Genetic predisposition of some people.
2. Taking incorrect doses of antibiotics to cure diseases.
3. Using antibiotics in livestock farming.
4. Multiple chronic diseases in some people.
Select the correct answer using the code given below.
(a) 1 and 2
(b) 2 and 3 only
(c) 1,3 and 4
(d) 2,3 and 4

Difficulty: Medium to Tough depending on how regularly you follow newspaper.
ANS:

Guessmastergiri: Not applicable. While most people know #2 to be correct, but that alone doesn’t even help reaching till 50:50.

(Pre19-SetA) Q99. What is cas9 protein that is often mentioned in news ?
(a) A molecular scissors used in targeted gene editing.
(b) A biosensor used in the accurate detection of pathogens in patients.
(c) A gene that makes plants pest-resistant
(d) A herbicidal substance synthesized in generally modified crops

Difficulty: Easy. Because it was asked as one of the ‘wrong’ options in Prelim-2018. So, anyone with habit of going through previous papers and reading about the wrong options’ validity should have no problem in solving it.
ANS:

Difficulty: Easy to medium, depending on your reading habit and whether you’ve Science / Medical / Pharma background.
ANS:

(Pre19-SetA) Q75. With reference to communication technologies, what is/are the difference/differences between LTE (Long-Term Evolution) and VoLTE (Voice over Long-Term Evolution)?
1. LTE is commonly marketed as 3G and VoLTE is commonly marketed as advanced 3G.
2. LTE is data-only technology and VoLTE is voice-only technology.
Select the correct answer using the code given below
(a) 1 only
(b) 2 only
(c) Both 1 and 2
(d) Neither 1 nor 2

Difficulty: Medium to tough, depending on your reading habit and whether you’ve ECE/IT  background. In retrospect, it may look easy but in real exam when you have to tick, you’ll have second thoughts over second statement. I don’t classify it as easy because verbatim answer is not available in the routine preparation sources and PDF compilations.
ANS: 2017-Sept, IndiaToday

Guessmastergiri Rule#1: Extreme worded statements are always wrong. Accordingly, #2 ought to be wrong without studying anything, but that can take us only to 50:50 stage between A or D. It does not help arriving at the correct answer directly.

(Pre19-SetA) Q91. In The context of digital technologies for entertainment, consider the following statements :
1. In Augmented Reality (AR), a simulated environment is created and the physical world is completely shut out.
2. In Virtual Reality (VR), images generated from the computer are projected onto real life objects or surroundings.
3. AR allows individual to be present in the world and improves the experience using the camera of smart-phone or PC.
4.VR closes the world, and transposes an individual, providing complete immersion experience.
Which of the statements given above is/are correct?
(a) 1 and 2 only
(b) 3 and 4
(c) 1, 2 and 3
(d) 4 only

Difficulty: Medium to tough, depending on your reading habit and whether you’ve ECE/IT  background. I don’t classify it as easy because verbatim answer is not available in the routine preparation sources and PDF compilations.
ANS: 2017-August, theHindu:

(Pre19-SetA) Q94. Consider the following statements about a digital signature:
1. An electronic record that identifies the certifying authority issuing it.
2. Used to serve as a proof of identity of an individual to access information of server on Internet.
3.an electronic method of signing an electronic document and ensuring that the original content is unchanged.
Which of the statements given above is/are correct?
(a) 1 only
(b) 2 and 3 only
(c) 3 only (if considering ‘Digital Signature’ in the literal sense.)
(d) 1,2 and 3 (if considering ‘Digital Signature Certificate: DSC’ in broad sense.)

Thus, correct answer could be:

Going by the precedence, examiner could be asking in literal sense only. So, while I lean towards C, but ultimately, final judge is UPSC’s official answer key to be released next year.

(Pre19-SetA) Q95. In the context of wearable technology, which of the following tasks is/are accomplished by wearable devices?
1. Location identification of a person
2. Sleep monitoring of a person
3. Assisting the hearing impaired person
Select the correct answer using the code given below.
(a) 1 only
(b) 2 and 3 only
(c) 3 only
(d) 1, 2 and 3

Difficulty: Easy to medium, depending on your imagination of how smartwatches and other devices could be used.
ANS:

Guessmastergiri Rule#4: A 3TF MCQ with 1-2 words= all correct without studying anything. If you ignore the word ‘person’, then it fits this format, and you arrive at correct answer ‘D’.

(Pre19-SetA) Q97. Recently, scientists observed the merger of giant ‘blackholes’ billions of light-years away from the earth. What is the significance of this observation?
(a) ‘Higgs boson particles’ were detected.
(b) ‘Gravitational waves’ were detected.
(c) Possibility of inter-galactic space travel through ‘wormhole’ was confirmed.
(d) It enabled the scientists to understand to ‘singularity’.

Difficulty: Medium to Tough depending on how keenly you follow newspaper for science tech affairs. Because ‘merger of Blackhole’ is not a ‘big’ current affairs item greatly covered in PDF/Mags unlike that first blackhole photo-walla topic.
ANS:

GuessmastergiriTM: Not Applicable.
Stay tuned for the remaining subjects’ Answerkeys.