Observation / Analysis about Environment in Prelims-19 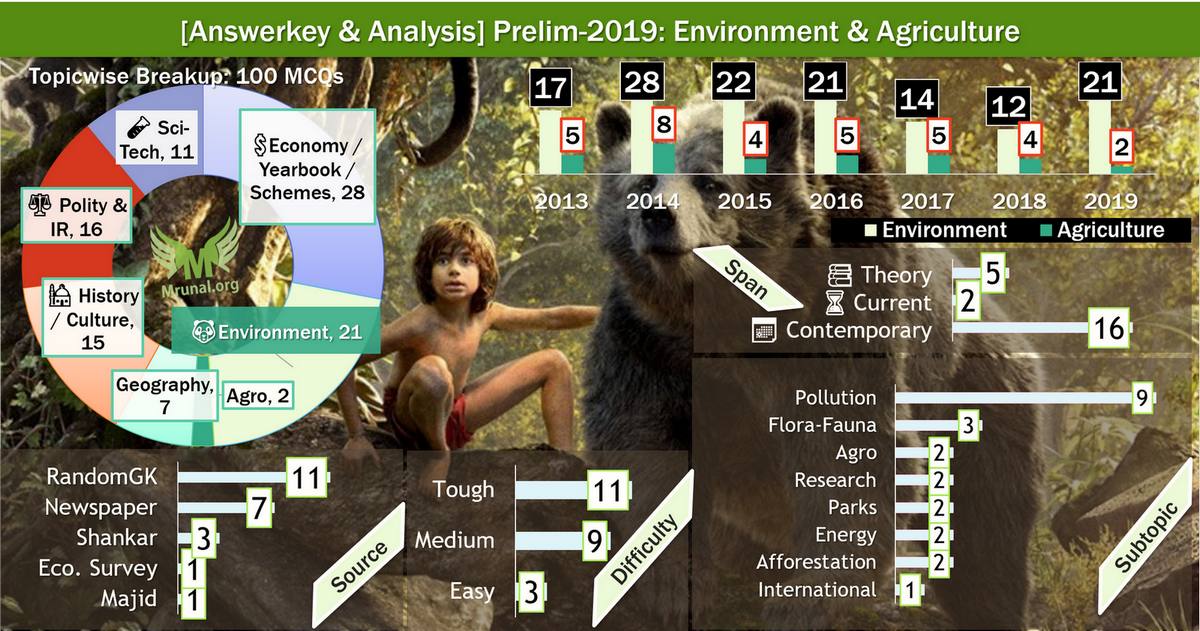 To conclude, Environment section is medium to tough. UPSC examiner has accomplished that mostly by focusing on Contemporary Affairs that happened before 2018, and ensure that it was from outside the routine preparation sources.

How to prepare Environment and biodiversity for Prelims – 2020?

How to prepare Agriculture for Prelims – 2020?

Since the merger of Forest service Prelims with civil service, good number of questions have been asked from the agriculture subject of course 2019 is an exception but one swallow doesn’t make a summer.
The agro MCQs in UPSC Prelims can be classified into three categories:

(Pre19-SetA) Q18. Which one of the following national parks lies completely in the Temperate alpine zone?
(a) Manas national park
(b) Namdapha national park
(c) Neora valley national park
(d) Valley of flower national park
Difficulty: Tough. Requires knowledge of both elevation and State in which a given park is located. And they’re not given easy to eliminate options like Panna, Mudumalai, Ranthambore.
ANS: I’ve taken a map from Tamilnadu Agri uni. and plotted approximate location of the Parks. Valley of flowers is completely in purple zone, while Namdapha’s some area may be in brown zone. so, D seems most appropriate.
GuessmastergiriTM: Not Applicable.

GuessmastergiriTM Rule#1 says extreme worded statements are ALWAYS wrong. Here, every statement contains extreme worded ‘only’ however any serious player would know that Asiatic lion is found only in Gir forest of Gujarat, India so #1 has to be true. Then remaining two options must be false because they contain extreme word, and GuessmastergiriTM Rule#2: dates, figures, numbers are always wrong so then #2 and #3 should be wrong because they’re mentioning number of horns / humps. So, then you arrive at right answer ‘A’. Although it still requires knowledge about Asiatic lions so this hashtag ‘#Without-Studying-Anything’ is not fully justifiable.

Which of the statement given above are correct?
(a) 1 and 3 only
(b) 2, 3 and 4 only
(c) 2 and 4 only
(d) 1, 2, 3 and 4
Difficulty: Tough. Because if you apply ‘common sense’ that viviparous = producing living young (not eggs) and misbelieve that snakes only produce eggs so #4 ought to be wrong then by elimination you arrive at wrong answer A.
ANS:

GuessmastergiriTM: Not Applicable. Since all statements contain the non-extreme word ‘some’ so no rule is applicable.

Which one of the pair given above are correctly matched?
(a) 1 and 2 only
(b) 2 and 3 only
(c) 1 and 3 only
(d) 1, 2 and 3
Difficulty: Easy. Irrawaddy is a river of Myanmar. So, Irrawaddy dolphin is unlikely to have swum all the way inside India and that too upto Chambal river to be ‘naturally’ found there. So, #2 wrong by elimination Answer should be C. But let’s check with references:
ANS:

GuessmastergiriTM: Not Applicable. Irrawaddy river swimming was logical elimination through knowledge, it’s not Guessmaster-giri. Because Guessmaster-giri relies on Set of Rules to tick without-studying-anything.

With reference to the states mentioned above, in terms of percentage of forest cover to the total area of State, which one of the following is the correct ascending order?
(a) 2-3-1-4
(b) 2-3-4-1
(c) 3-2-4-1
(d) 3-2-1-4
Difficulty: Medium to Tough. While Shankar’s page 32 says Madhya Pradesh has largest forest cover (area wise) but it has no information about forest cover in terms of percentages for all these states. If you try to make some logical connections that Chhattisgarh and Odisha or less urbanized compared to Madhya Pradesh and Maharashtra (or that they’ve more Naxal problem due to forest-hiding areas) so they ought to have higher % forest cover, then you’ll be at 50:50 between C and D.
ANS: Majid Hussina’s Geography of India | हिंदी में भी उपलब्ध page 5.6, table 5.2

Which of the statements given above is/are correct?
(a) 1 only
(b) 2 only
(c) Bth 1 and 2
(d) Neither 1 nor 2
Difficulty: Tough. Because all features of this act are not given in Shankar’s book
ANS: ShankarIAS Environment Book (6th Ed) page 314

GuessmastergiriTM Rule#1 extreme worded statements are wrong. Then ‘2’ contains extreme word ‘mandatory’ so it ought to be wrong, thus we arrive at 50:50 stage between A or D.

(Pre19-SetA) Q25. In the context of which of the following do some scientists suggest the use of cirrus cloud thinning technique and the injection of sulphate aerosol into stratosphere?
(a) Creating the artificial rains in some regions
(b) Reducing the frequency and intensity of tropical cyclones
(c) Reducing the adverse effects of the solar wind on the earth
(d) Reducing the global warming
Difficulty: Tough. Asked from 2017’s news item.
ANS: 2017-August, IndianExpress

(Pre19-SetA) Q31. Recently, there was a growing awareness in our country about the importance of Himalayan nettle (Girardinia diversifolia) because it is found to be a sustainable source of
(a) anti-malarial drug
(b) biodiesel
(c) pulp for paper industry
(d) textile fibre
Difficulty: Tough. Not available in routine newspapers.
ANS: 2017-DowntoEarth

(Pre19-SetA) Q32. For the measurement/estimation of which of the following are satellite images/remote sensing data used?

Select the correct answer using the code given below:
(a) 1 only
(b) 2 and 3 only
(c) 3 only
(d) 1, 2 and 3
Difficulty: Tough because while NCERT Class11 ‘Practical work in geography’ has a dedicated chapter on this topic but 1) it doesn’t contain these keywords 2) most of the UPSC candidates donot go through that ‘practical work’ book anyways.
ANS: 2018-Sept, IndianExpress

(Pre19-SetA) Q26. In the context of which one of the following are the terms pyrolysis and plasma gasification mentioned?
(a) Extraction of earth element
(b) natural gas extractions technologies
(c) Hydrogen fuel based automobiles
(d) Waste to energy technologies
Difficulty: Easy, given verbatim in Shankar’s book.
ANS: ShankarIAS Environment Book (6th Ed) page 73

(Pre19-SetA) Q34. Which of the following statements are correct about the deposits of methane hydrate?

Select the correct answer using the code given below:
(a) 1 and 2 only
(b) 2 and 3 only
(c) 1 and 3 only
(d) 1, 2 and 3
Difficulty: Tough. While in 2019-Jan, TheHindu had published an article about IIT Madras research of gas hydrates, But that article itself alone does not help much in solving this question. And I don’t subscribe to the ‘Sapnaa-Theory’ of Delhi thugs that just because a term was mentioned in a random theHindu article, so you were suppose to get a divine epiphany that UPSC was going to ask in this much detail so you were supposed to make a research-paper note by yourself accordingly.
ANS:

(Pre19-SetA) Q43. In the context of the proposals to the use of hydrogen-enriched CNG (H-CNG) as fuel for buses in public transport, consider the following statements

Which of the statements given above is/are correct?
(a) 1 only
(b) 2 and 3 only
(c) 4 only
(d) 1,2,3 and 4
Difficulty: Medium Tough, depending on your preparation of Current Affairs in Environment. Because if you’re not aware of exact topic and just try to make random logical connectives, it may take you towards wrong answers.
ANS: 2018-July: IndianExpress

Which of the statements given above is/are correct?
(a) 1 and 3 only
(b) 2 and 3 only
(c) 2 only
(d) 1, 2 and 3
Difficulty: Medium to Tough. While answer is given verbatim in theHindu but not in the most PDF compilations. (And since most candidates don’t read original hindu but only its PDF summaries so it’s not easy). Even if you try to make logical connectives that Urea in Agriculture soil = nitrogen oxides, still you’ll be 50:50 between A or D.
ANS: 2018-June, TheHindu

(Pre19-SetA) Q30. Why is there a great concern about the microbeads that are released into environment?
(a) They are considered harmful to marine ecosystem
(b) They are considered to cause skin cancer in children
(c) They are small enough to absorbed by crop plants in irrigated fields
(d) They are often found to be used as food adulterants
Difficulty: Tough because asked about a contemporary affairs topic from two years old news item.
ANS: 2017-IndianExpress:

Which of the above are released into the atmosphere due to the burning of crop/biomass residue?
(a) 1 and 2 only
(b) 2, 3 and 4 only
(c) 1 and 4 only
(d) 1,2,3 and 4
Difficulty: Tough because multiple answers possible depending on how you interpret the sources and chemistry.

Counter-view: Answer should be C

Final judge: UPSC’s official answerkey to be released in 2020.
GuessmastergiriTM: Not Applicable.

(Pre19-SetA) Q39. In India, the use of carbofuran, methyl parathion phorate and triazophos is viewed with apprehension. These chemicals are used as
(a) pesticides in agriculture
(b) preservatives in processed foods
(c) fruit-ripening agents
(d) moisturising agents in cosmetics
Difficulty: Medium to Tough. Asked from two years old news.
ANS: 2017-IndianExpress

(Pre19-SetA) Q58. Consider the following statements :
The Environment Protection Act, 1986 empowers the Government of India to

Which of the statements given above is/are correct?
(a) 1 only
(b) 2 only
(c) Both 1 and 2
(d) Neither 1 nor 2
Difficulty: Medium to tough. While second statement can be validated from Shankar’s book but first statement is not given in routine books.
ANS: Original Act

Counter-view: Answer should be ‘B’

Final judge: UPSC’s official answerkey to be released in 2020.
GuessmastergiriTM: Not Applicable.

(Pre19-SetA) Q78. In India, ‘extended producer responsibility’ was introduced as an important feature in which of the following?
(a) The Bio-medical Waste (management and handling) rules,1998
(b) The Recycled Plastic (manufacturing and usage) rules, 1999
(c) The e- Waste (Management and handling) rules, 2011
(d) The food safety and standard regulations, 2011
Difficulty: Easy, given verbatim in Shankar.
ANS:

(Pre19-SetA) Q59. As per the Solid Waste Management Rules, 2016 in India , which one of the following statements is correct?
(a) Waste generator has to segregate waste into 5 categories.
(b) The Rules are applicable to notified urban local bodies, notified towns and all industrial township only.
(c) The Rules provide for exact and elaborate criteria for the identification of sites for landfills and waste processing facilities.
(d) It is mandatory on the part of waste generator that the waste generated in one district cannot be moved to another district.
Difficulty: Tough because all points are not given in routine books.
ANS: ShankarIAS Environment Book (6th Ed) page 304:

Remaining points are not given in the short note on that page, so we’ve to search elsewhere.

So, it’s not mandatory for India to add all the sites in the list and conserve them. So, #1 is wrong and answer is B: 2 and 3 only.
GuessmastergiriTM Rule#1: Extreme worded statements are always wrong so then first statement should be wrong and by elimination we are 50:50 between B or C.

(Pre19-SetA) Q21. Which one the following group of a plant domesticated in the new world and introduced into the old world?
(a) Tobacco, cocoas, and rubber
(b) Tobacco, cotton and rubbers
(c) Cotton, coffee and sugarcane
(d) Rubber, coffee and wheat
Difficulty: Tough. While term is vaguely mentioned in 2019-March theHindu column but in food/ lifestyle columns, but doesn’t give actual answer to this question.
ANS: 2019-March theHindu column: Historians call exchange of biological species between the old world (Asia and Europe), and the new world (the Americas) as the “Columbian exchange”.

(Pre19-SetA) Q83. With reference to the cultivation of Kharif crops in India in the last five years, consider the following statements :

Which of the statements given above are correct?
(a) 1 and 3 only
(b) 2, 3 and 4 only
(c) 2 and 4 only
(d) 1, 2, 3 and 4
Difficulty: Medium to Tough. While it’s given in Economic Survey but who can memorize so ascending descending orders!? Medium difficulty because if you start thinking on the lines that ‘oilseed is a cashcrop, so unlikely that its area will be lower than jowar which is grown in by very poor people only. And Government keeps Sugarcane FSP high to appease the farmers so it seems unlikely that its cultivation area decline steadily then #2 and #4 ought to be wrong.’ then you arrive at right answer A. But let’s crosscheck and verify:
ANS: Economic Survey 2017-18 Vol2 Ch.7 on Agriculture, Ref: Table 3 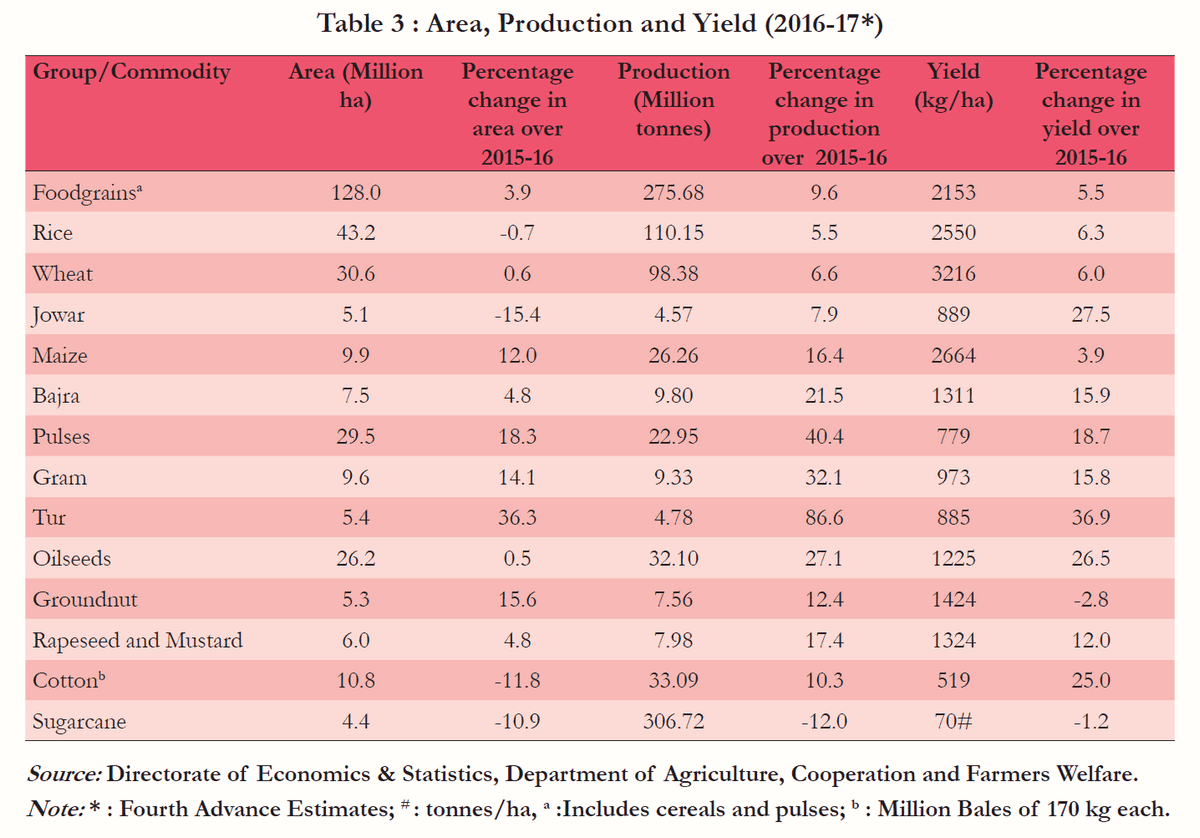 Anti-Guessmaster question. Because GuessmastergiriTM Rule#1 says extreme worded statements are ALWAYS wrong, then #1 ought to be wrong but if you believe that, you’ll never arrive at the right answer!

Stay tuned for the last part of answerkey on Geography.