Few weeks back, UPSC had uploaded Ethics case study sample questions for the GS paper IV click me. Continuing on that line, here are some more sample questions on “ethics”. Although this article itself is full of not-so-ethical-behavior, because I haven’t designed most of these ethics case study questions, I’ve shamelessly lifted them from the ethics courses from Universities of San Diego and Texas, and gave them a bit of Indian flavor.

Now some role playing / Situation Reaction test (SRT) type questions. The answer is not difficult to guess e.g. “ofcouse DevAnand shouldn’t help his friend evade sales tax” – but the challenge is how will you put that eloquently in a formal language, in 50-100-200 words as the question requires. Think about that, while you solve these questions.

Dev Anand, a Senior Manager with SAIL, has just learned that in two weeks HQ will be sending a new lady project engineer Miss Vaijanthi Mala to his division. The HQ is anxious to move more women into all levels of the company and has targeted Dev’s engineering division as a good place for Miss Mala. She will be the first woman engineer in this division. Upon learning this news, several of Dev’s employees opined that they don’t like the idea of a woman supervising their work and Dev should use his connections in the HQ to prevent Miss Mala’s posting here.

Continuing further with the same case:

Miss Mala has been with Dev’s division for several months now. Although Dev has not found any employees under Miss Mala’s supervision refusing to work outrightly, but they do seem to be dragging their feet in small ways so they miss the project deadlines. The other groups under male supervisors, also show reluctance to cooperate with this group under Miss. Mala. Sometimes they even mock this group and pass cheap jokes and emails, leading to verbal fights in the office among the employees.

Mr.Pran, Dev’s second in command and rival, keeps instigating junior staff not to cooperate with Miss Mala. At the same time, Pran informally keeps telling HQ that Dev’s own incompetence is responsible for not meeting project deadlines.
Dev is increasingly becoming worried that Mala’s presence is having negative effect on his entire division’s ability to meet deadlines and this might even affect his own career.

With the development of new reproductive technologies, it is now possible for old women to become pregnant even after menopause even in their 50s and 60s.

Dr.Pran:  “this is perfectly fine, after all many old men marry young girls to get a ‘son’ to carry their family’s name, then why shouldn’t an old lady be allowed become mother again. Besides this is also good for hospital’s business.”

Dr.Dev disagrees, “Statistically, those mothers conceiving in their late sixties will die before their children reach adulthood. Then such parent-less children will be without financial and emotional support. They’ll be at an increased risk of stress, depression, drug addiction and suicide. Therefore it is unethical for old people to use science to become parents again.”

Dev Anand is employed at one of the steel factories of SAIL and preparing for UPSC exam. He doesn’t work with hot metal or furnace himself but one day, several workers complaint respiratory problems because of the fumes coming out of that furnace. Dev brings this matter to his head of department, Mr.Pran. But Pran says, “Our factory is in full compliance with international XAXA guidelines for steel manufacturing. So if workers are sick- that is only because of weather change. You cannot blame the furnace. Still if there is problem, ask those workers to wear masks.” 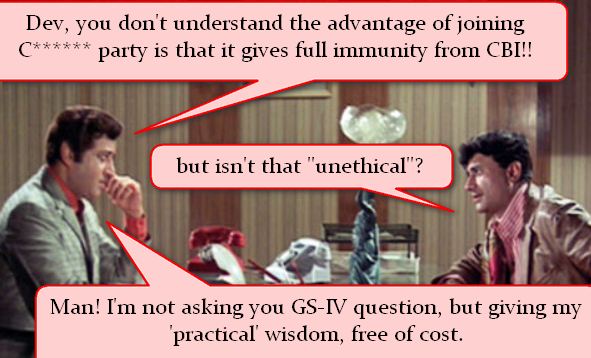 Dev Anand is working in Kakrapar Nuclear plant. An NGO starts a campaign alleging that plant is dumping radioactive waste in nearby river. Dev’s boss Mr.Pran asks him to file a report. The summary of Dev’s report is:

But Mr. Pran is fears jholacchhap NGO will selectively highlight only line #1 and #2 from Dev’s report to create more fear-mongering among the villagers. It’ll lead to more protests and whole incident will turn into a political controversy. Therefore Mr.Pran orders Dev Anand: “Do some ‘statistical juggling’ to show that radiation level is normal in that river, and delete the first line that states Dead fishes were found.”

What should DevAnand do? and Why?

What should Dr.Dev do? and Why?

Colonel Dev Anand is the head of a secret intelligence unit operating in a state affected by terrorism for a long time. The Chief Minister of this state, has been advocating for removal of Armed forces special Powers Act (AFSPA).

General Pran requests the Union defense minister not to pay attention to such demands, stating that without AFSPA, we (army) cannot function efficiently in this troubled region. But Defense Minister doesn’t seem very convinced. Gen.Pran grows impatient and asks Col. Dev Anand to withdraw a large sum of money from secret service fund and use it to buy off independent MLAs and opposition parties and get a no-confidence motion against this Chief Minister in state assembly. What should Col.DevAnand do?

Same case like previous one but just slight modifications:
State ministers are colluding with Naxalites for doing illegal mining while policemen are getting killed during ambushes.
DGP Pran thinks that any FIR against state ministers, won’t lead to any result. So, he asks DSP DevAnand to withdraw money from secret service fund and destabilize this government via no-confidence motion. What should Dev do?

DevAnand is working part time with PSU Fertilizer Company. This job enables him to attend evening college without having to take student loans. Dev’s supervisor Mr.Pran tells him to dump a half used chemical-drum in the drain.

Dev: Isn’t that against the law?

Pran: We’ve been dumping this chemical for last 30 years and people in this part of India are still alive. If I spent my time worrying about every little regulation, then factory will shut down. Get it done, full stop.

Pran leaves the room, fully expecting Dev to dump that toxic chemical. What do you think he should do?

Pran requests him “I’ll get it cleaned up but please don’t file this officially in your weekly report, because my promotion is due next month.” Dev has known Pran for many years, as a sincere, hardworking employee of the company. But Dev also fears that if anything goes wrong, the CEO or the pollution control board won’t be happy with his informal way of dealing with this problem. What should Dev do at this point?

BHEL has received an order from a state government to manufacture 5 lakh tablets for students. BHEL demanded Rs.5000 for each tablet stating that their own unit cost of production is Rs.4900 per tablet. After the deal is signed, BHEL’s engineers design a new alloy, electric-circuit and thus manufacture tablets at just Rs.500 each. Dev Anand from accounting department brings this to the notice of Mr. Pran, the main boss of BHEL.

Pran: don’t worry, no one will know the price difference unless they made fair amount of testing with rival tablet companies.

Dev: But I feel that customer (State government) is not getting what was promised. Even if they’re satisfied with a different type of tablet, shouldn’t they be given an opportunity to decide whether new tablet is acceptable –and to benefit from lowered cost?

Pran: The basic idea is to satisfy the customer with good quality parts and we are doing that. So what’s the problem?

Should Dev press the matter further? or do you agree that Pran is just doing good business?

Pran asks his best friend DevAnand to transport some merchandise across state border so that he can avoid paying taxes on it.

Pran argues, “I’ll donate an equivalent sum of money to a reputed NGO working for child-laborers, but don’t want my tax-money get wasted in the hands of corrupt government.”

Should Dev support him or not? and why?

Pran: Dev, I know this is really bad timing but I’ve to tell you that I’ve received call from finance ministry, and we won’t renew the contracts of those temporary primary teachers. I want you to let them know as soon as possible-this afternoon. So they can start looking for alternative arrangements and jobs.

Dev doesn’t want to spoil everyone’s Diwali, thinks about releasing this bad news after Diwali is over. What should he do?

Dev Anand is a quality control engineer at DRDO. DRDO has contracted a Saudi firm to supply certain electronics for a tank for the Indian Army. At last minute, Dev finds out that two special parts inside the Saudi electronic circuit were actually made by China.

There is extremely low chance that even during repairs, anyone will find out these were from China. But If Dev reports this discrepancy, there tank delivery will be stalled for months, and he himself might be punished by seniors for notifying this at last minute- And the unnecessary hue and cry in media might even cost his job. What should Dev do?

Dev Anand and Pran are college batchmates. After graduation, Dev joins PWD as civil engineer while Pran becomes a building contractor. Once at a marriage reception, Dev mentions that he always wanted to play golf at the Kingfisher club but its fees were too high. Pran says his uncle has connections with the owner of the said golf club and he could easily arrange membership at a discounted price. Should Dev accept his offer?

Dev Anand has been appointed as the public prosecutor against a ‘baba’ who is accused of raping a minor girl. Although Dev’s own parents happen to be long time devotees of that baba, Dev himself was never associated with this baba’s cult.

But, Mr.Pran, a lawyer of dubious standards, who was also eyeing for the same public-prosecutor job, starts a media-campaign to malign DevAnand, by showing his family’s connections with that baba. Should Dev leave this case? Yes/No/Why?

Dev Anand is an accountant with ILF real estate. Dev is also associated with an NGO that successfully spearheaded a campaign against illegal encroachment by a particular real estate mafia in a nearby village. Now through his office work, Dev has learned that the CEO of ILF, Mr.Pran himself was the real brain behind that illegal land grabbing. Should Dev notify this to his NGO friend? If the case goes to court, ILF might shut down and Dev might lose his job. What should Dev do?

In the Oscar winning movie Million Dollar Baby, the boxer-girl gets paralyzed below neck during a match. Doctors say there is no hope of her recovery. Before this accident, she had taken health insurance policy and hence there is no issue of money but she is disowned by her family, doesn’t want to live such life of disability and depression, and therefore asks her boxing coach to perform euthanasia by mixing a poison in her glucose drip.

Mr. Pran has authored a book to help students learn how to cheat during university exam. What will you do under following circumstances and why?