Besides, Land reform topic is also part of many optional subjects in UPSC Mains:

What is land reform?

Observe that word “tenure/Tenancy” keeps reappearing. So what does that mean?

Ok well and good. So far we know: what is land reform and who are the players in a land tenancy system. We have to study land ‘reform’.  Meaning some badass thuggary was going on, otherwise if everything was well and good, then there was no need for ‘reforms’! So what was the cause of thuggary/grievance/resentment? Ans. Land tenure systems of British.

But this solution had a problem: the revenue system under Mughals and Native rulers=too complex for the British to understand, and there were no coaching classes or Wikipedia to help white men understand this complex system. 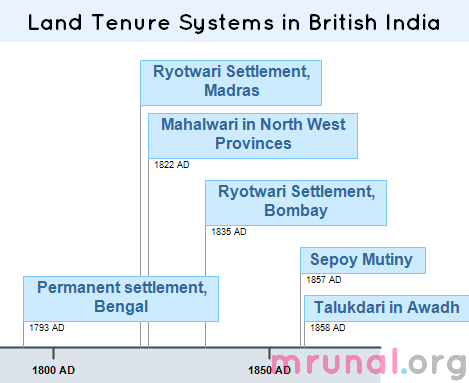 By Sir Thomas Munro at first in Madras State and then adopted in Bombay, and Assam. But Why?

This model was based on English yeomen farmers.

Why is it called Modified Zamindari system?

In most economies, the evolution is traditional farming=>capitalist farming methods. But in India, it did not happen, why?

When India got independence, the situation was:

In the next article, we’ll various peasant revolts because of these oppressive land tenure systems.