in the previous articles, we’ve seen:

Tenancy reform acts by and large protect only superior and inferior tenant. Sharecroppers/Laborers get nothing. Anyways, let’s check the salient features of such Acts in various states: 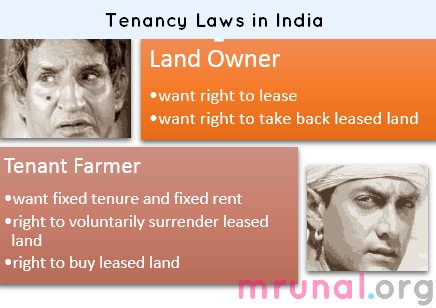 Additionally, if a tenant cannot pay rent on time, the landlord cannot approach court to get his cattle, farm-tools and standing crops. (In other words, tenant given protection against attachment even if he defaults on rent payment.)

Limitation: Although states had fixed Maximum rent in 20-50% range, but in most cases, the tenants had to pay rent in the range of 50-70%- especially in the areas with high productivity under green revolution. Corrupt District officials failed to enforce the rent limits.

6th Five year plan suggested the state governments to pass laws to bring down rents to ensure rents are not above 33% of the produce.

Now to the fifth and final element under Land Tenancy reform acts:

Many state laws permit tenant to acquire the land IF he pays 10-20-50times the annual rent to the landowner. Let’s check:

Limitation of Right to ownership:

In above examples, we saw how ~50% of tenants in Gujarat and Maharahstra, got ownership rights after paying to landowner. But why didn’t every tenant bought land from his land owner? Because:

Some states also made laws for:

In the next article, we’ll see the achievements and limitations of Tenancy reforms undertaken in India.