What is Fed tapering 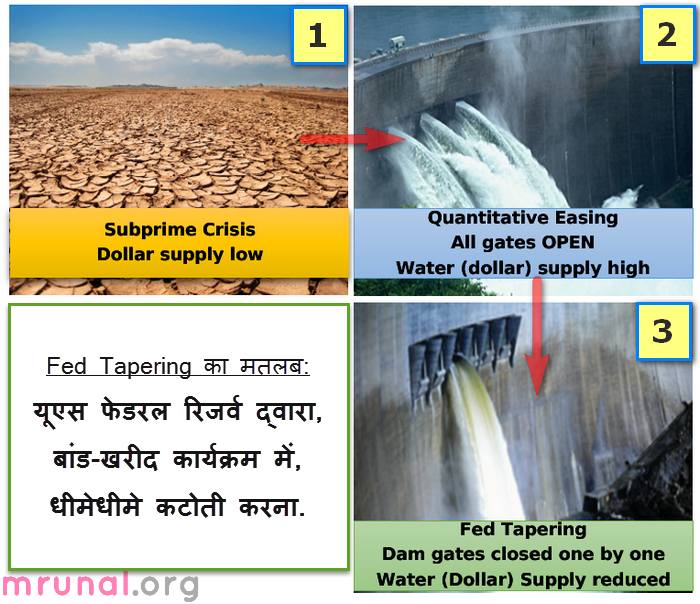 In the first article, we saw that:

At this rate, canal doors should completely shut down @October 2014. (Because now the new Chairman Jenet Yellen is reducing the water supply (dollars) by 10 billion USD per month.)

Why is it called Fed Tapering? 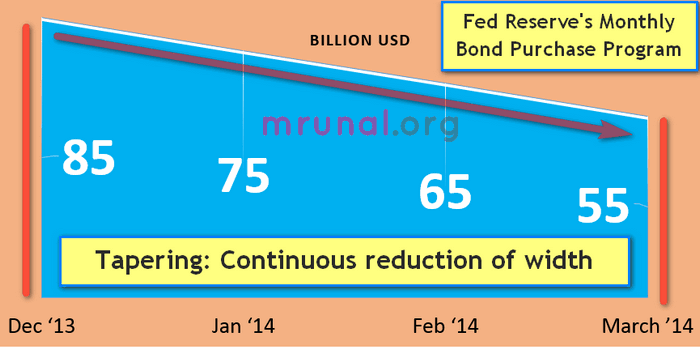 How can Fed Tapering affect India?

Let me summarize that in a table:

Since QE = increase dollar supply and Fed tapering= decrease in dollar supply, so by common sense, every effect should become reverse, right? 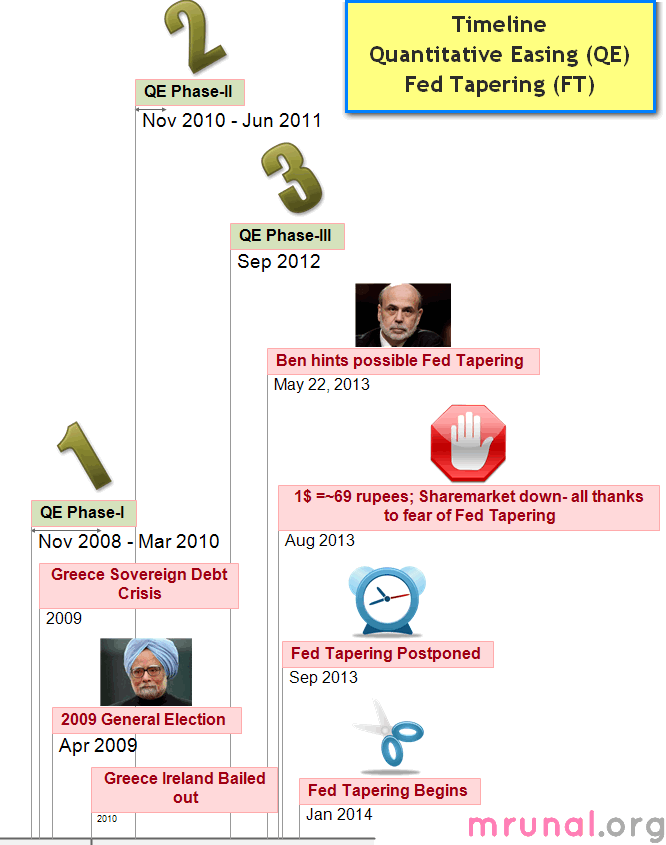 Let’s not waste more time in ball by ball commentary and jump directly to:

WCS3: Exports may not increase

Fed tapering = US feds has started decreasing water supply (dollar) from their canal (Bond-buying program). This implies that USA economy is recovering. So, If US economy is recovering = American juntaa will buy more = Indian exporters will see more demand. (This is the positive thinking assumption.) but there are two errors in this positive thinking.

At present USITC is conducting a hearing about “How Indian trade policies affect US jobs”.

Ofcourse, one can argue that Indian drugs are bad quality or that Indian IPR/Patent law sucks. Therefore, USA’s actions are justified. But we are the same country since last three years- yet until now American regulatory bodies did not take any action. BUT ONLY after Devyani case and within just one month (February 2014) , they suddenly start all this “regulatory activism”=> something fishy, revenge mindset, will hurt Indian exporters.

BoP crisis: how can that happen?

In the worst-of-the-worst-case scenario, Fed tapering may cause Balance of Payment (BoP) crisis in India. How?

First let’s understand some background theory: when and how can BoP crisis happen?

In each of them, further we’ve incoming money (credit) and outgoing money (Debit).

For the sake of understanding, let’s observe a BoP data from 2012-13 (USD million dollars).

What happens to this “overall” surplus 4 billion USD? Three things can happen

We took the third option. Observe.

But what happens IF we don’t have surplus (i.e. capital account has less money than current account)?

It happened in 1991’s BoP crisis. Observe the data

If this pothole is not filled up, then what will happen?

This is called Balance of Payment (BoP) crisis. Solution? We had to pledge ~65 tonnes of gold to IMF to borrow ~2.3 billion USD. That money was used to fillup the BoP pothole. We also initiated LPG reforms, to ensure that in future we have sufficient capital surplus so BoP crisis doesn’t happen again. Enough flashback of ’91,  Back to original moving:

There are three pre-conditions for BoP crisis to happen:

Nonetheless, prevention is better than cure. In the next article, we’ll see the steps taken by RBI +Government ot immunize Indian economy against the negative impact of Fed Tapering.