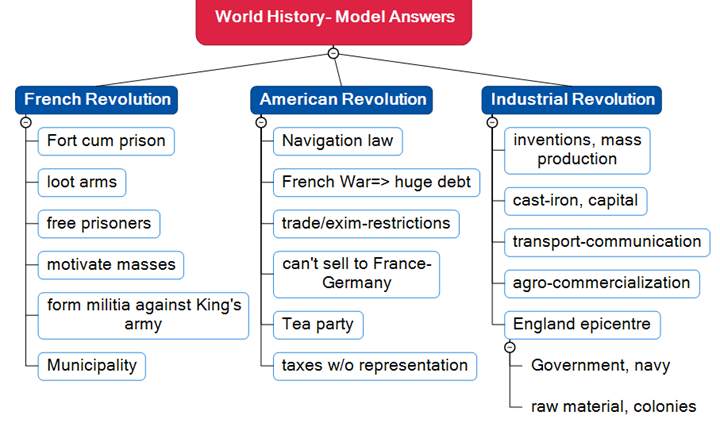 Q. The fall of Bastille was not just the fall of a fort but the beginning of French revolution. Substantiate.  (200 words)

Thus, Fall of Bastille proved to be the victory of the common people against the autocracy and aristocracy. For the first time in the history of France, monarchy was under direct threat. All these factors culminated into the birth of French revolution, leading to abomination of aristocratic privileges and establishment of new social order based on Democratic principles.

Q. Crony capitalism, mercantilism and welfare of mother nation on the expense of colony was the main driving force behind the American Revolution. Elaborate with relevant incidents. (200 words)

Ans. American Revolution was inspired by several socio-economic-political factors & intellectual awareness of the masses, but the main factor was the economic exploitation of American colonies by the British.

These suppressive policies of British mercantilism backfired and united all the 13 American colonies who shared the common thread of discrimination, suffering and resentment at the hand of British Empire, thus culminating to the American Revolution.

Ans. Industrial revolution was an epoch marking era of human history, a paradigm shift that began in 1700s and continued in 1800s. It forever changed the way mankind operated. It was marked by gigantic and path breaking technological innovations that completely transformed the economic, social, cultural, political and industrial fields in following ways:

Gauging by the sheer number of changes it transpired, industrial revolution can be considered the largest revolution in human history. It ushered new critical thinking, scientific temperament and application of logic and reason in the society; lead to innovation in every field, transformed the basic socio-politico-economic structure of society and thus changed the course human history.

England was epicentre of Industrial Revolution because: