Environment: continuity and change in Prelims-2018 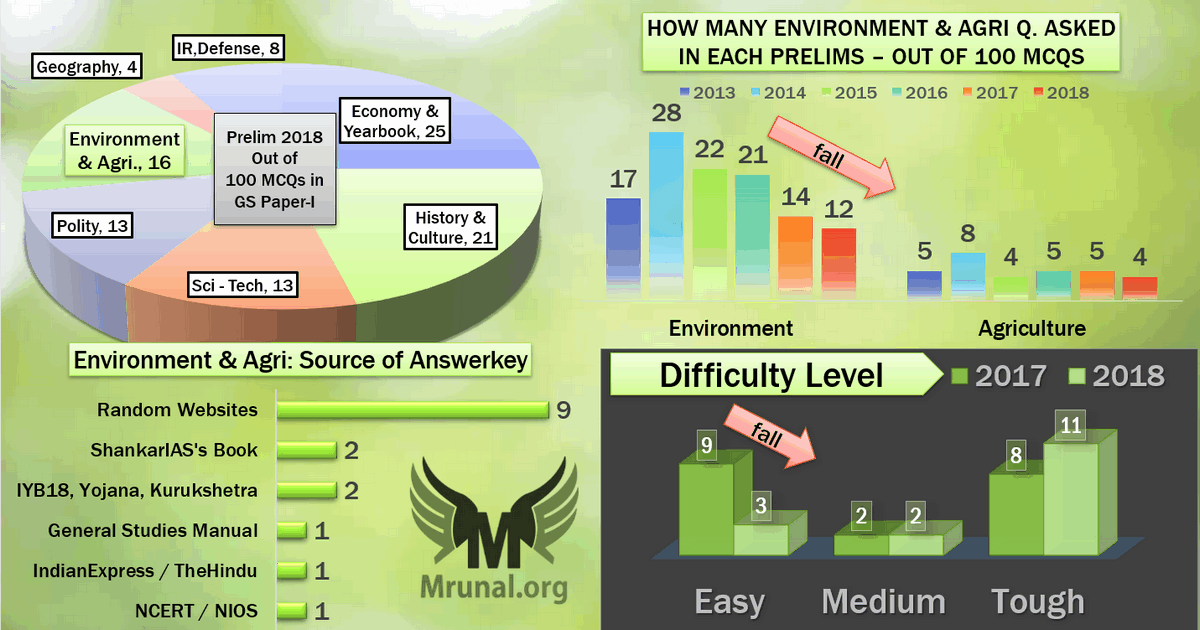 How to prepare Environment and biodiversity for Prelims – 2019?

Ever since the merger of Forest service prelims with Civil services exam, good number of questions were devoted to agriculture. They can be classified into three categories:

How to prepare Agriculture for Prelims – 2019?

Difficulty: Medium – given verbatim in Shankar’s book, but in real exam-stress, not easy to recall for everyone.

Answer: ShankarIAS’s Environment Book ch. 12 on Plant Diversity, subtopic “Some invasive alien species”: This plant is a native of Mexico, and spread throughout India. It’s an aggressive colonizer, common weed of wastelands, scrublands and degraded forests. Since it’s mention under the head of invasive alien species so it’d reduce biodiversity in the area, Hence Option B.

Difficulty: Tough because no single routine book contains all information.

Anti-GuessmasterTM question because GM-Rule#1 extreme worded statements are always wrong so #3 ought to be wrong, plus half-learned guess that tropical rainforests have very high net primary productivity (NPP) etc. so coral reefs can’t be better than them. But by this logic you’ll end up eliminating all options with #3 and arrive at wrong answer A.

Difficulty: Medium because it boils down to your knowledge about statement #1.

Guessmaster-giriTM can only help narrowing down choices: By GM-Rule#3 Parent organizations are always wrong, then statement#2 ought to be wrong, thus your choice is narrowed down between A vs D only.

Difficulty: Tough, because not given in routine books / newspapers. Yes, there is vague reference in Hindu in 2016 and before- but that doesn’t count.

Guessmaster-giriTM helps, if you go by GM-Rule#5 then word-association: “fertilizers” associates with “plant” and “growth”, then you arrive at correct option-A #WITHOUT-STUDYING-ANYTHING..

Q45. The term “sixth mass extinction/sixth extinction” is often mentioned in the news in the context of the discussion of (Pre18 Set-D)

Difficulty: Medium to Tough, depending on whether you ever came across this term or not.

Scientists are, in fact, even suggesting that the sixth mass extinction is underway as there is a species loss of 100–1000 every year….The normal background extinction rate is about 10–25 species per year. Habitat loss, overpopulation of humans, pollution, over-harvesting and invasive species invasion are cited as the main reasons.

It was also in news under theHindu 2017-July.

Q51. Which of the following is/are the possible consequence/s of heavy sand mining in riverbeds ? (Pre18 Set-D)

Difficulty: Easy, given verbatim in Shankar’s book, and can be solved even with basic understanding of geography and environment.

Answer: ShankarIAS’s Environment Book ch.7 on Environmental Issues, subtopic Sand Mining: “It wrecks the intertidal area and creates the imminent danger of saline water ingress into fresh water.” Meaning salinity will increase, so statement#1 is wrong, by elimination we’ve answer “B” 2 and 3 only.

In this question, first statement is wrong, and you’ve to identify right statements. So in real exam stress, some students may have made error of reading / ticking, and they’d have ticked the wrong option A: only 1. (you’re right that it’s wrong statement, but you’re not asked to tick the wrong one.) So, be mindful of ticking in OMR.

Anti-GuessmasterTM question because GM-rule#4: that in UPSC “3tf MCQ” (3-statement-true/false), IF each individual statement contains barely 1-2 words then all of them are correct. Yes, here more than 2 words due to articles and prepositions, so, basic skeleton is similar. So, going by fourth rule, you’ll reach the wrong answer D.

Q28. Which of the following has/have shrunk immensely/dried up in the recent past due to human activities ? (Pre18 Set-D)

Difficulty: Tough, because not covered in routine books and newspapers in last one calendar year.

Q19. How is the National Green Tribunal (NGT) different from the Central Pollution Control Board (CPCB) (Pre18 Set-D)

Which of the statements given above is/are  correct:

Difficulty: Tough. Baigas tribals getting habitat rights is an old news from 2016. इतना पुराना GK कौन याद रखता है? Some of the senior candidates may even know from IYB that Forest rights act falls under domain of Tribal Ministry (Ch.28 on Welfare) so #3 ought to be irrelevant but in real exam stress, possible to have second thoughts about that too, because MOEFCC could be responsible for vulnerable tribes!? Besides, Government had changed the term “primitive” to “particular” because the former word was disrespectful, yet UPSC has used the same here to describe those tribes.

If you go by GM-Rule#1 extreme worded statements are always wrong and GM-Rule#3 that parent organizations are always wrong then on both rules, statement#3 ought to be wrong, and by elimination you get right answer A, #WITHOUT-STUDYING-ANYTHING..

Q79. In which one of the following States is Pakhui Wildlife Sanctuary located? (Pre18 Set-D)

Difficulty: Tough because difficult to memorize so many places. Besides, even if you vaguely remembered that it’s in North East, all four options are closely related.

ShankarIAS’s Environment Book has given “Pakke Tiger reserve: Arunanchal Pradesh” (Appendix Page335), but that doesn’t help, because same place is also known as Pakhuai, but this crucial fact not mention there. So, if you’ve time, you can become Harry Potter’s Half-Blood prince and note it down in your copy of Shankar’s book that Pakke = Pakhui.

International Org: “About us”

Q53. The Partnership for Action on Green Economy (PAGE), a UN mechanism to assist countries transition towards greener and more inclusive economies, emerged at (Pre18 Set-D)

Difficulty: Tough, because asked from “About us” page of random international body. Even if you remembered it’s associated with sustainable development, still there are three options A, B and D containing that term.

Answer: In 2012, Rio+20 (the United Nations Conference on Sustainable Development) was held in Brazil….Partnership for Action on Green Economy (PAGE) was launched in 2013 as a response to the call at Rio+20 to support those countries wishing to embark on greener and more inclusive growth trajectories. [Ref: Organizations’ About US Page]

Difficulty: Tough. This is also “about us page” type MCQ from an event that occurred in 2016.

Q90. With reference to the ‘Global Alliance for Climate Smart Agriculture (GACSA)’, which of the following statements is/are correct? (Pre18 Set-D)

Select the correct answer using the code given

Difficulty: Tough. This is also an “about us page” type MCQ from a relatively unknown organization for competitive exams.

Anti-GuessmasterTM question. By GM-Rule#1, extreme worded statement#2 ought to be wrong then by elimination you arrive at wrong answer A.

Difficulty: Tough. Although topic’s in-depth coverage given in Kurukshetra Feb 2018, but most candidates underestimate / ignore this magazine. And even if you had read it, it’s tough to take a call in actual exam on the validity of statement 1 and 3. 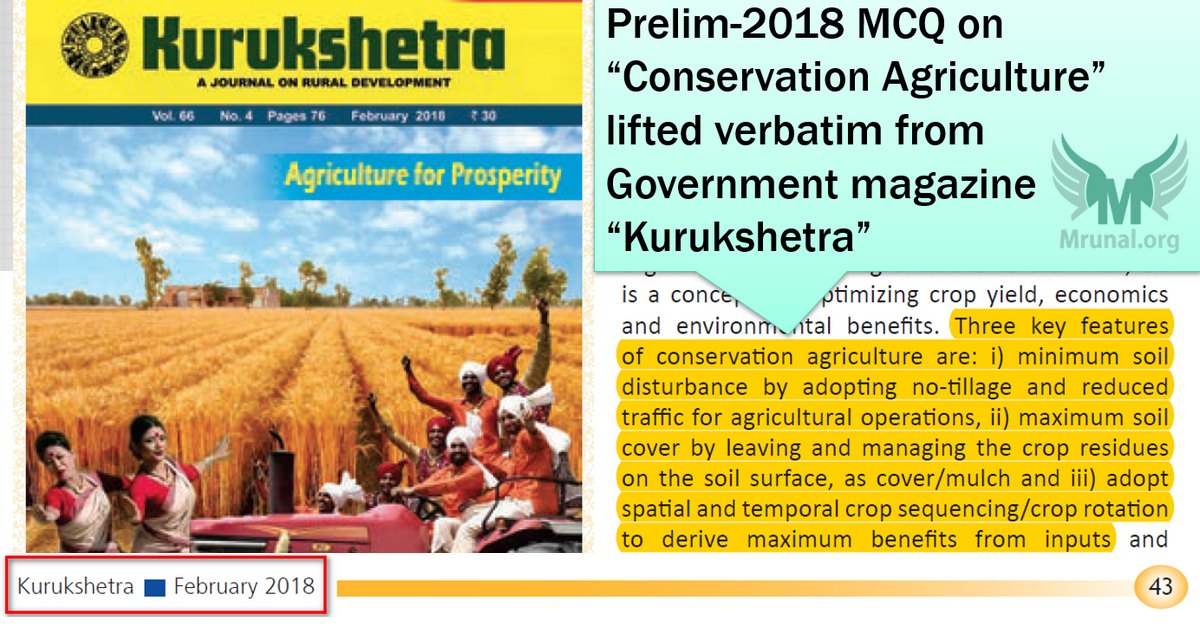 There are two options- B and C where 2, 4 and 5 are together. So it all boils down to validity of #3. Same magazine, page 31 even says Conservation Agriculture approach also involves Diversified Crop Rotation involving cereal-pulse system. Then we can infer that if we’ve to do avoid monoculture and plantation crop. Then #1 and #3 are also right ‘indirectly’. But there is no option where all five statements are together. Considering this unique situation, I’ll lend more weight to page 43 over page 31, and go for Answer C: 2, 4 and 5.

Guessmaster-giriTM is possible, if you go by GM-Rule#1 that extreme worded statements are always wrong, then #1 and #2 have to be wrong, by elimination, you arrive at correct answer B #WITHOUT-STUDYING-ANYTHING..

Difficulty: Tough because although Sikkim=Organic state is a widely covered factoid but this scheme was not a very hot topic of agriculture, and not covered in routine material.

Answer: According to the PDF notification at APEDA