Now coming to the History and Culture, and its comparison with the earlier years: 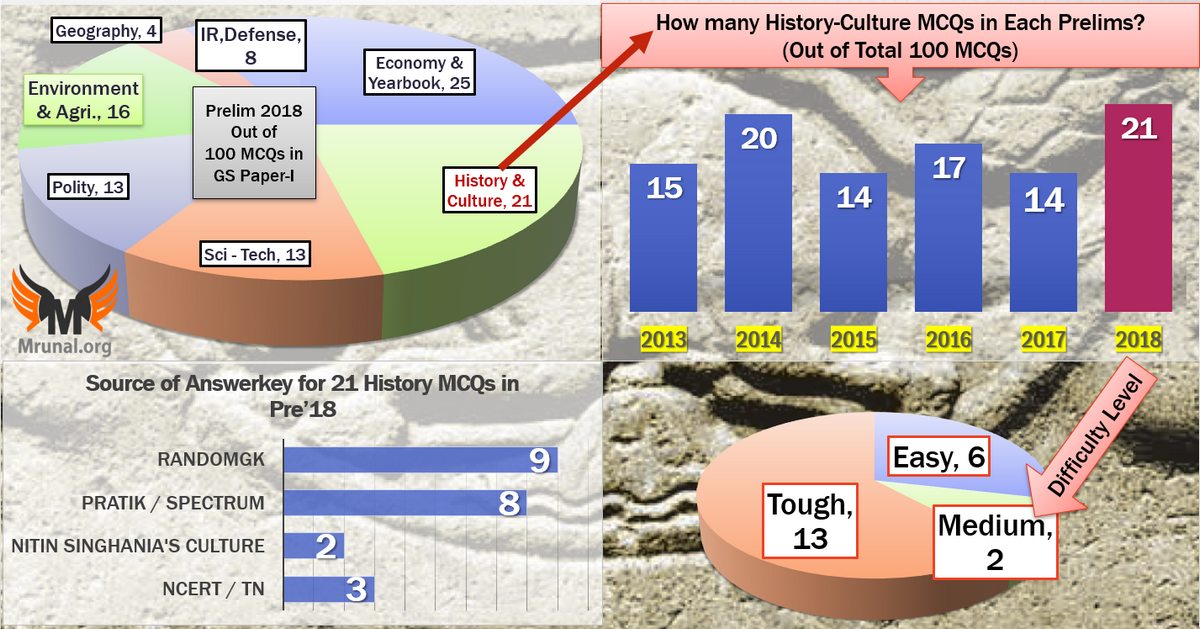 Sadistically tough MCQs should not be cherished with “Sapna Theory”

Even individual MCQ required you to know too many facts

Although History MCQs were faster to process than Polity MCQ, despite higher quantity

I’ve used the red-highlighters to demonstrate the tough MCQs within history subject:

Similar is the case with other subjects- geography, economy, polity, science…basically they create roadblocks. Nowadays, the process employed by most candidates is as following: 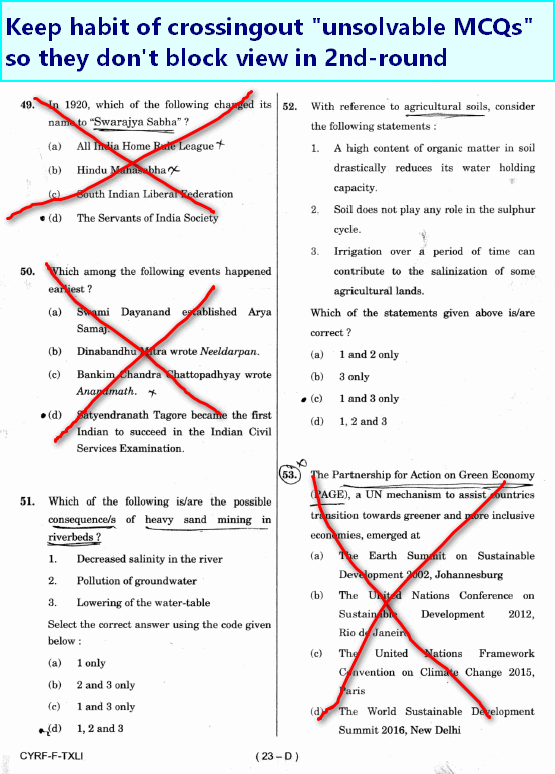 Should you take History Optional because 21 MCQs asked from here?

Although I’ve said this many times before but new aspirants have the same doubt, so I’ll repeat it again:

Strategy for Prelims-2019: How to study History?

Q11. With reference to the religious practices in India, the “Sthanakvasi” sect belongs to (Pre18 Set-D)

Difficulty: Tough, not available in the routine books for history / culture.

Answer: Sthanakvasi don’t differ much from the other Svetambara Jainas, hence now-a-days they invariably call themselves as Svetambara Sthanakvasi. [Ref: Random Google Book]

Guessmaster-giriTM doesn’t HELP. Because GM-Rule#5: Word-association, “-vasi” suffix suggest that word could be associated with Hindi / Gangetic belt, but in that case it could have been Vaishnavism also.

Q12. With reference to the cultural history of India, consider the following statements : (Pre18 Set-D)

Difficulty: Tough. Who can memorize such small details about every monument? And not all four of these monuments are covered in an individual books for Art and Culture.

Q14. With reference to Indian history, who among the following is a future Buddha, yet to come to save the world? (Pre18 Set-D)

Difficulty: Tough. While the term Maitreya is mentioned in NCERT, Std 11, Introduction to Indian Art, Chapter 4, Page 35. But, it doesn’t refer to him as future Buddha. Nor it’s given in the other routine books.

Answer: Krishna Reddy’s Indian History ch.4 Mauryan Empire – Subtopic Religious movement. “…..and interest developed in Maitreya, the future Buddha, whose coming was said to have been prophesied by the historical Buddha and who in years to come, would purify the world with his teachings.”

let’s also learn about the wrong options, lest they’re asked in future exams: Avalokitesvara (watchful lord), also called Padmapani (lotus-bearer), whose attribute is compassion, which reaches down even to Avichi, the lowest Buddhist purgatory. Loksesvara is also used as a synonym for him.

Which of the pairs given above is/are correct?

Difficulty: Tough because not in routine books. And even if it were given, difficult to memorize and recall all 617 approved / pending entries of Geographical Indicators from India. Yes, Random theHindu articles covered these terms in 2017 but I don’t subscribe to the “Sapna-Theory” that you were supposed to make your own compilations of all arts, craft, beaches, flora-fauna, hybrid varieties and dino-discoveries that are reported in theHindu.

Answer: Got to this GI registry page of India, click on “Show all entries”, then find it among the 617 entries!

Which of the pairs given above is/are correct ?

Difficulty: Medium, because although it can be solved directly from Nitin’s book but in real-exam stress a candidate can get confused over closely located NE states vs. dance / festival.

Paintings at Kishangarh is associated with the most romantic legends – Sawant Singh and his beloved Bani Thani. and of the intertwining of lives and myths, romance and bhakti. It is sometimes argued that the women in ‘bani thani’ is said to resemble the character of Radha.

Which of the statements given above are correct?

Difficulty: Tough, because Annamacharya not covered in routine books. 2017 was the 250th birth year of Tyagaraja. and Annamacharya’s name was mentioned in Vice President’s PIB speeches related to M.S. Subbulakshmi in 2017. However, this is not say that you were supposed to get a “Sapna / divination” do PHD on all composers of Carnatic / Bhakti music, because that is not practicable.

Answer: Nitin Singhania’s Culture Book | हिंदी में भी उपलब्ध ch. 18 Fairs and festivals of India subtopic: Secular festivals: “Saint Tyagaraja along with Muthuswami Dikshitar and Shyama Sastri, comprise the Trinity of Carnatic music.” Then going by a gut-feeling that if Annamacharya was a ‘real contemporary’, then his name would be among the Trinity. Hence statement#3 is wrong, A, C and D eliminated so answer is B: 2 and 4 only. Still, in real exam stress, it’s tough to even recall the names of Carnatic Trinity, and there is always a risk that Annamacharya could have been a ‘low profile’ contemporary of Tyagaraja, hence not covered in routine books.

But just to cross check

Guessmaster-giriTM possible, if you go by their GM-Rule#2 that all dates / figures related statements are always wrong, then #3 ought to be wrong and by elimination you arrive at correct answer #WITHOUT-STUDYING-ANYTHING..

Q13. Which one of the following foreign travellers elaborately discussed about diamonds and diamond mines of India? (Pre18 Set-D)

Difficulty: Tough. Although this is indirectly hinted in NCERT but difficult to recall and take risk in real exam stress. Because you couldn’t exactly remember whether it Jean Tavernier vs Jean Thevenot? Yes, a PHD scholar Dr. Balakrishan had written a column in theHindu, 2018-Jan that French gem merchant, Jean-Baptiste Tavernier acquired Hope Diamond from Kollur mines in Andhra Pradesh in 1666. But I don’t subscribe to the “Sapna-Theory” for the reasons already mentioned in the opening part of this article.

While we are at this question, let’s also solve the wrong options, lest they’re asked in future exams:

Freedom Struggle: Before arrival of Gandhi

Q15. Which one of the following statements does not apply to the system of Subsidiary Alliance introduced by Lord Wellesley? (Pre18 Set-D) 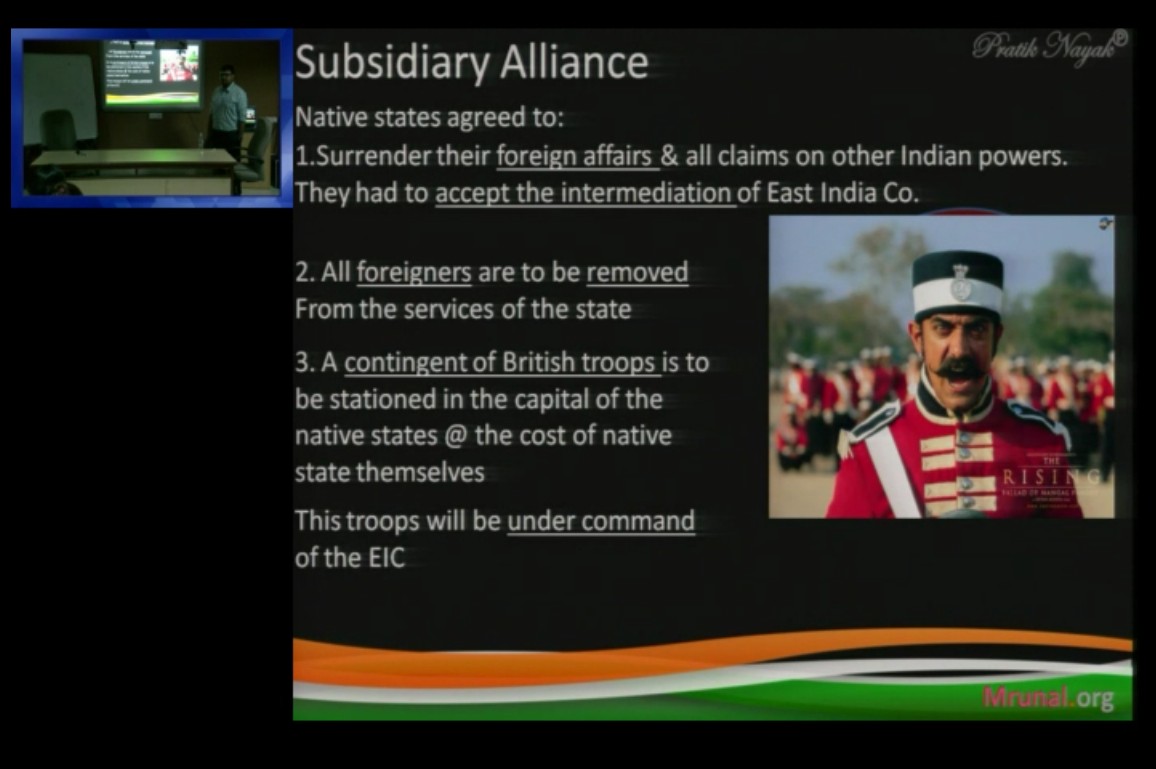 Q26. He wrote biographies of Mazzini, Garibaldi, Shivaji and Shrikrishna; stayed in America for some time; and was also elected to the Central Assembly. He was (Pre18 Set-D)

Difficulty: Tough because this particular Freedom fighter GK not covered in routine books.

Q36. After the Santhal Uprising subsided, what was/were the measure/measures taken by the colonial government? (Pre18 Set-D)

Difficulty: Tough because second statement’s validity not given in routine material.

Anti-GuessmasterTM because their GM-Rule#1: extreme worded statements are always wrong. #2 is basically saying no santhal can sell any land to non-santhal- so it ought to be wrong. Besides, a Guess-master would also think that since British wanted Zamindars / outsiders to ‘move in’ to the jungle areas for exploitation purpose so #2 could not have happened.

Q50. Which among the following events happened earliest ? (Pre18 Set-D)

Difficulty: Tough, although it’s given in routine books but difficult to recall exact years of these closely packed events between 1859-1882.

Freedom Struggle: After arrival of Gandhi

Q9. Which one of the following is a very significant aspect of the Champaran Satyagraha? (Pre18 Set-D)

Difficulty: Easy for anyone who has prepared freedom struggle in a diligent manner. 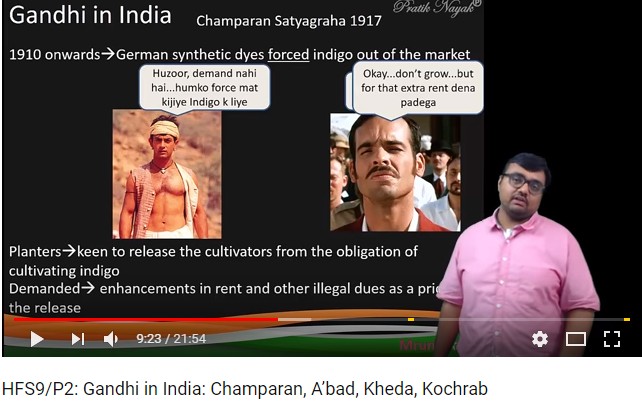 Answer: Watch Pratik Nayak’s HFS9/P2: Gandhi in India: Champaran, A’bad, Kheda. Option A, B and D are irrelevant to Champaran Satyagraha. Champaran Satyagraha completed 100 years in 2017, but this was a straight-forward question, so you had to prepare it irrespectively, whether you got 100 years’s “सपना” or not.

Guessmaster-giriTM can only help narrowing down the choices. GM-Rule#1 extreme worded statements are always wrong so A and D ought to be wrong.

Difficulty: Tough. Not given in routine books, and even if it were given, difficult to memorize and recall such low-profile term in real exam!

Answer: Upon repeated instance from home rule leaguers, Gandhi did accept the presidentship of the Home Rule League only in 1920 and changed its name to “Swarajya Sabha”. [Ref: Random Google book]

While we are at it, let’s also gain knowledge about the wrong statements, lest it’s asked in future exam!

Q59. With reference to educational institutes during colonial rule in India, consider the following pairs of Institution vs Founder: (Pre18 Set-D)

Which of the pairs given above is/are correct?

Difficulty: Tough, although these are covered in routine books. But in real exam stress, candidate would get confused over Arthur Wellesley / Lord Wellesley.

Q64. Regarding Wood’s Dispatch, which of the following statements are true ? (Pre18 Set-D)

Difficulty: Easy, covered in all routine books, and nature of statements are such that it doesn’t require much mental effort in recollecting GK type factoids.

Guessmaster-giriTM possible, if you go by their GM-Rule#1 that all extreme worded statements are always wrong then #3 ought to be wrong and by elimination you get the right answer A, #WITHOUT-STUDYING-ANYTHING..

Q46. Which of the following led to the introduction of English Education in India ? (Pre18 Set-D)

Difficulty: Medium because routine books cover only Macaulay’s committee (1835) and not this 1823’s Committee, so even if you’re sure about 1 and 2, you could have second thoughts about picking A or D. 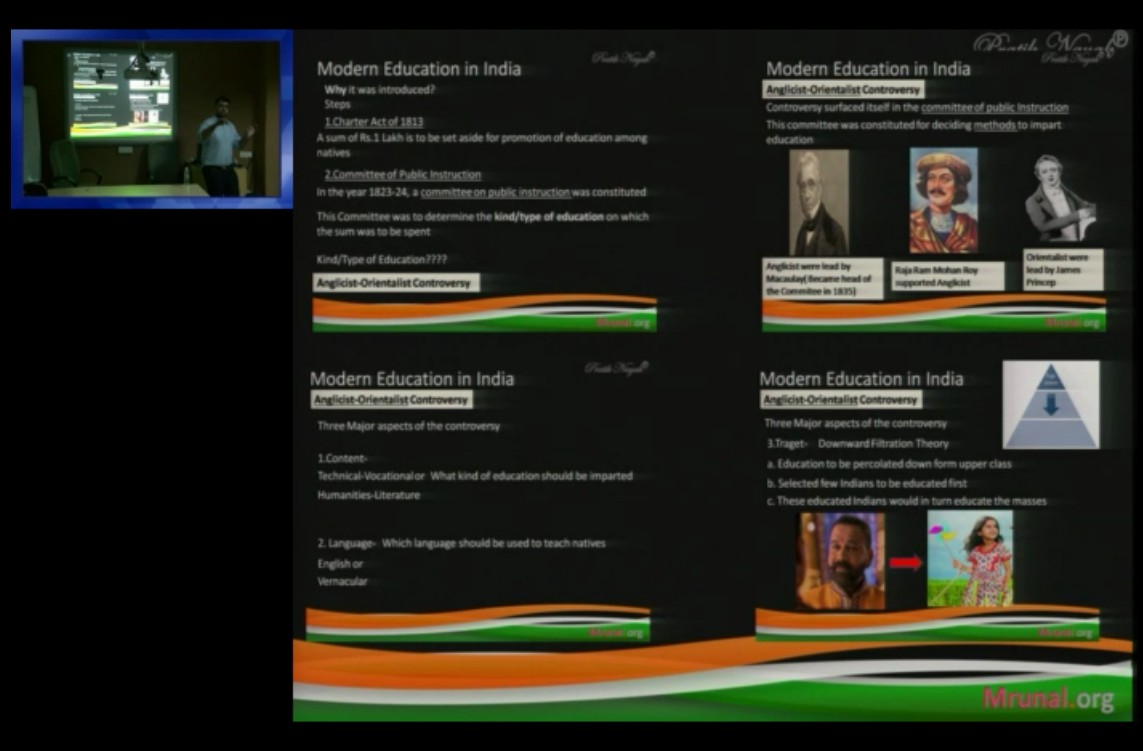 Guessmaster-giriTM possible, if you go by their GM-Rule#4 that in UPSC “3tf MCQ” (3-statement-true/false), IF each individual statement contains barely 1-2 words then all of them are correct. Ofcourse, this MCQ has four statements but the skeleton is similar, so, you directly get the right answer D: 1, 2, 3, and 4; #WITHOUT-STUDYING-ANYTHING.

Q37. Economically, one of the results of the British rule in India in the 19th century was the (Pre18 Set-D) 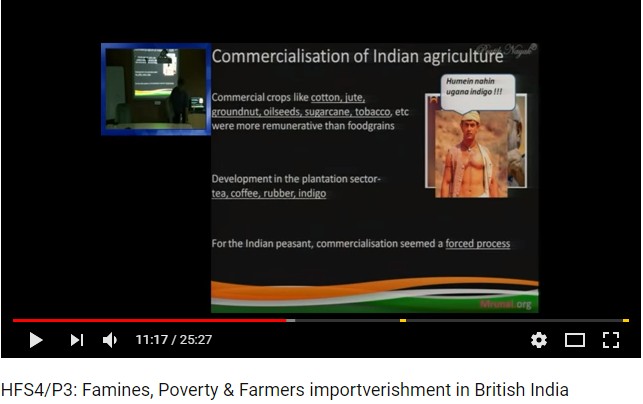 Q8. The staple commodities of export by the English East India Company from Bengal in the middle of the 18th century were (Pre18 Set-D)

Difficulty: Easy, given in NEW NCERT.

Q10. Who among the following were the founders of the “Hind Mazdoor Sabha” established in 1948 ? (Pre18 Set-D)

Difficulty: Tough, not available in the routine books for history / post-independence.

Answer: From their about-us page: http://www.hindmazdoorsabha.com/about-hms.php

Which of the following is the correct chronological sequence of the above events?

Difficulty: Tough because while every serious candidate knows Imperial Bank to SBI happened in 1955 (in the course of Economy/ Banking Sector Evolution) and Goa independence was in early 60s (in the course of Polity preparation). So, 2 comes before 4, so, A and C are wrong but still you’ve two options left. And, post-independence India comes in Mains syllabus, so candidates don’t prepare in-depth factual GK. And yes, Air India had been in news because of its proposed privatization in Budget-2018, and SBI had been in news because of merger of its Associated banks and BMB WEF 1/4/17. But I don’t subscribe to the Sapna-Theory here, because ‘Established in _ _ year / Chronology’ type MCQs are very rare in Economy. So candidates don’t pay that much attention to it.