Observation / Analysis about Economy in Prelims-19 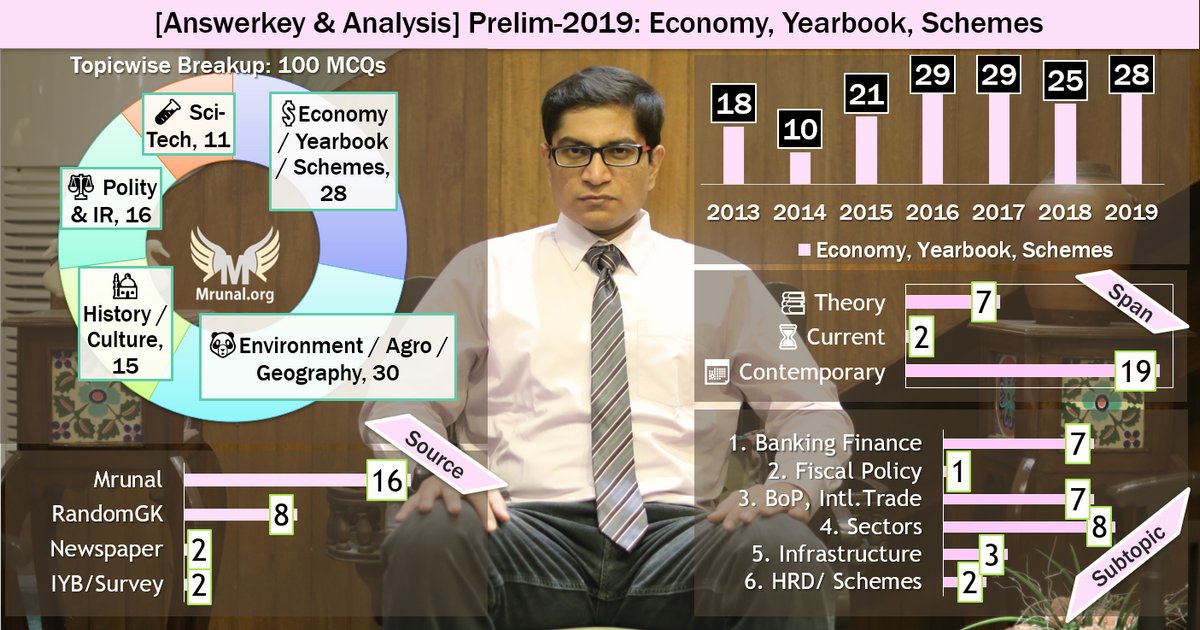 We live in Modi-Trump era. Chest thumping & Self-branding is necessary. Besides, my claims are more modest than those saying 95 out of 100 MCQ came from their material and test series only.

What if i don’t want to join your paid course

For some reason you don’t want to join / can’t join above paid course due to monetary issues, then how to approach economy for Prelims-2020? Thugs of Delhi / Khan-Market MukherjeeNagar Gang will never tell you that, unless you join their Paid-course. But, I despise such tactics. So, here is the answer:

To conclude, Economy is not a rocket science. Economy is a scoring component of General Studies. It’s much easier to master compared to certain other segments of GS. Now let’s solve Prelims-2019 paper:

(Pre19-SetA) Q64. Which of the following is not included in the assets of a commercial bank in India?
(a) Advances
(b) Deposits
(c) Investments
(d) Money at call and short notice
Difficulty: Easy. This much basic understanding of Money-Banking-Finance is expected from every serious candidate.

(Pre19-SetA) Q72. What was the purpose of the Inter-Creditor Agreement signed by Indian banks and financial institutions recently?
(a) To lessen the Government of India’s perennial burden of fiscal deficit and current account deficit
(b) To support the infrastructure projects of Central and State Governments
(c) To act as independent regulator in case of applications for loans of Rs 50 crore or more
(d) To aim at faster resolution of stressed assets of Rs 50 crore or more which are under consortium lending.
Difficulty: Easy. Basic feature of Project Sashakt asked.

Anti-Guessmaster question, because GuessmastergiriTM Rule#2: Dates, Years & figures are always wrong in statement but if you believe that then you’ll eliminate both C and D, you’ll never arrive at the correct answer!

(Pre19-SetA) Q73. The Chairman of public sector banks are selected by the
(a) Banks Board Bureau
(b) Reserve Bank of India
(c) Union Ministry of Finance
(d) Management of concerned bank
Difficulty: Easy. Basic feature of BBB asked. 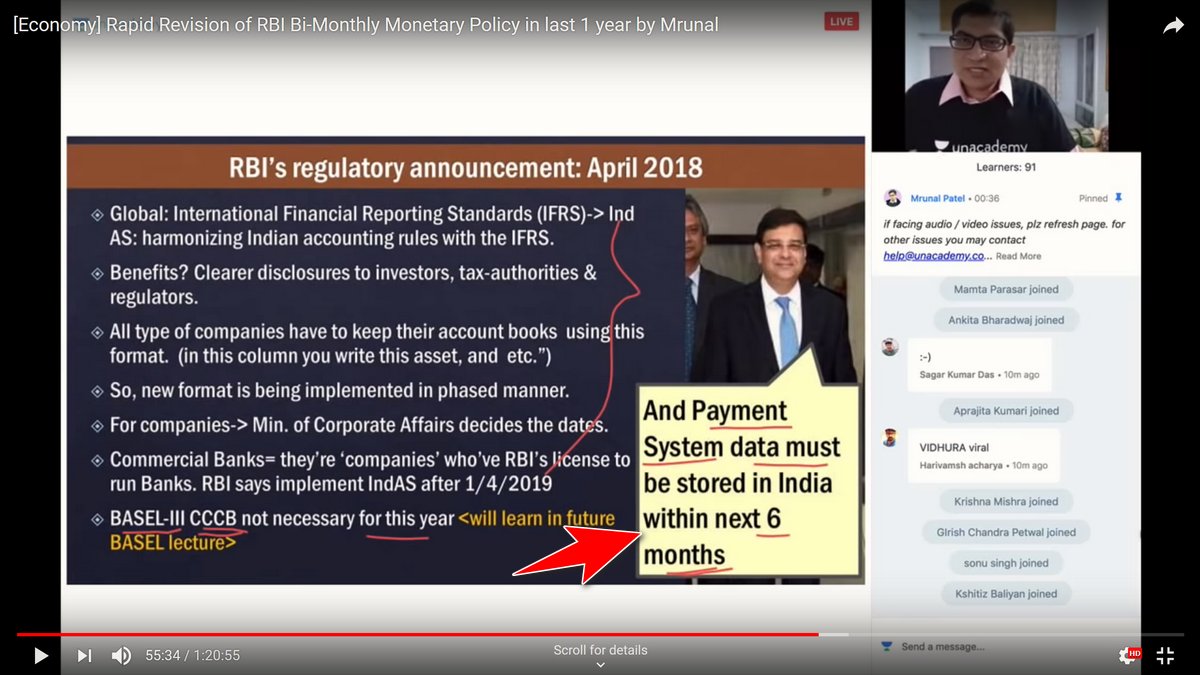 ANS: Mrunal’s Youtube lecture on RBI’s bi-monthly monetary policy updates: payment system providers are required to store the data in India only. Other features are hyperbole / irrelevant / not required by RBI.
Anti-Guessmaster question, because GuessmastergiriTM Rule#1: Extreme worded statements are always wrong, then First statement ought to be wrong but if you believe it then you will never arrived at the right answer!

(Pre19-SetA) Q67. Which of the following is issued by registered foreign portfolio investors to overseas investors who want to be part of the Indian stock market without registering themselves directly?
(a) Certificate of Deposit
(b) Commercial Paper
(c) Promissory Note
(d) Participatory Note
Difficulty: Easy. 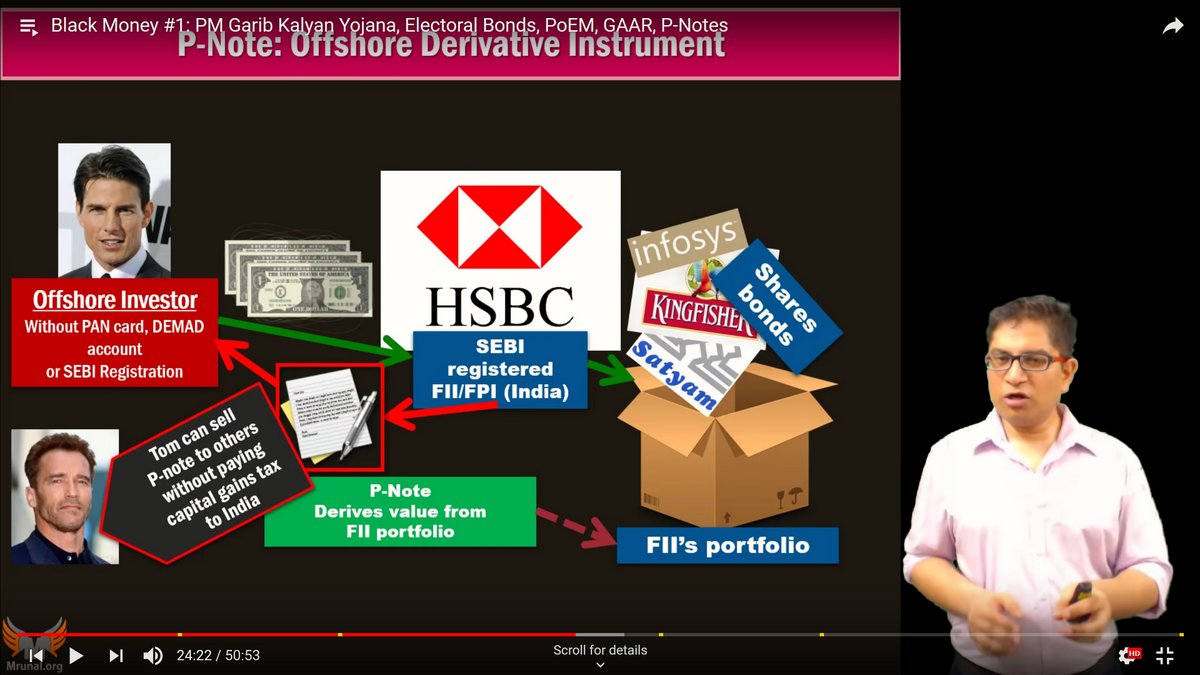 (Pre19-SetA) Q69. In India, which of the following review the independent regulators in sectors like telecommunications, insurance, electricity etc. ?

(Pre19-SetA) Q37. Among the following, which one of the following is the largest exporter of rice in the world in the last five years?
(a) China
(b) India
(c) Myanmar
(d) Vietnam
Difficulty: Tough. Who prepares this much trend analysis each and every crop!?
ANS: 2019-Jan, Hindu Businessline Or 2018-June IndianExpress

(Pre19-SetA) Q84. Among the agricultural commodities imported by India, which one of the following accounts for the highest imports in terms of value in the last five years?
(a) Spices
(b) Fresh fruits
(c) Pulses
(d) Vegetable oils
Difficulty: Medium to Tough. If you had gone through last year’s UPSC Prelim answer key, then you’d know that “quantity of imported edible oils is more than the domestic production of edible oils in the last five years.” So, answer could be 50:50 between either C or D. Because seems unlikely that we are importing spices or fruits in great quantity.
ANS:

Which of the statements given above is/are correct?
(a) 1 only
(b) 2 only
(c) Both 1 and 2
(d) Neither 1 nor 2
Difficulty: Easy. This is basic information related to Balance of Payment (BoP). 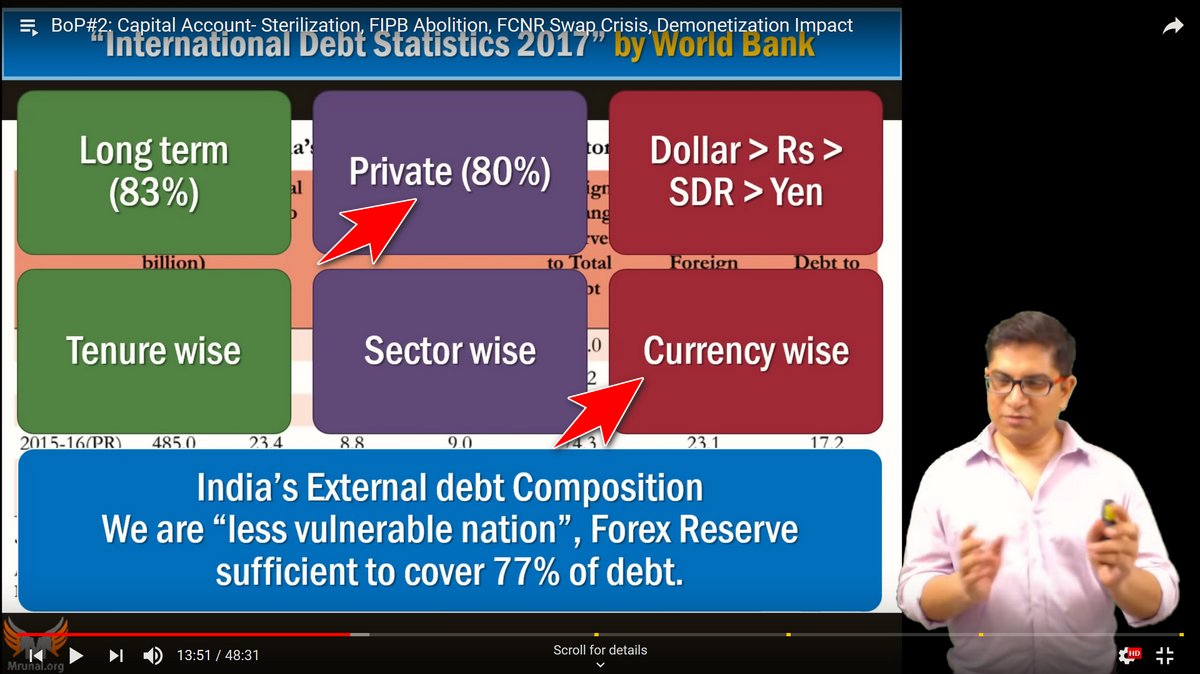 GuessmastergiriTM Rule#1: Extreme worded statements are always wrong. Here, second statement contains extreme word ‘All’, so, it ought to be wrong, and we are left with 50:50 between A or D.

(Pre19-SetA) Q65. In the context of India, which of the following factors is/are contributor/contributors to reducing the risk of a currency crisis?

Select the correct answer using the code given below.
(a) 1 only
(b) 1 and 3 only
(c) 2 only
(d) 1,2 and 3 only
Difficulty: Easy, for anyone who has the basic understanding of balance of payment and currency exchange rate system. Tough for anyone who has opted to do PHD on it because then he’ll be in perpetual dilemma because of his Birbal-ki-khichdi logics & overthinking.

(Pre19-SetA) Q86. Which one of the following is not the most likely measure the Government/RBI takes to stop the slide of Indian rupee?
(a) Curbing imports of non-essential goods and promoting exports
(b) Encouraging indian borrowers to issue rupee denominated Masala bonds
(c) Easing conditions relating to external commercial borrowing
(d) Following an expansionary monetary policy
Difficulty: Easy, for anyone who has the basic understanding of balance of payment and currency exchange rate system.

GuessmastergiriTM Rule#1: Extreme worded statements are always wrong. Here, both second and third statements contain extreme words ‘largest’ and ‘any’ respectively. So, they ought to be wrong and by elimination we are left with the answer A: only 1, #without-studying-anything.

Which of the statements given above is/ are correct?
(a) 1 only
(b) 2 only
(c) Both 1 and 2
(d) Neither 1 nor 2
Difficulty: Tough. Second statement requires factual GK.

GuessmastergiriTM Rule#2: Dates, Years & figures are always wrong in statement. Then #2 ought to be wrong, and we arrive at 50:50 between A or D.

(Pre19-SetA) Q79. The economic cost of food grains to the Food Corporation Of India is Minimum Support Price and bonus (if any) paid to the farmers plus
(a) Transportation cost only
(b) Interest cost only
(c) Procurement incidentals and distribution costs
(d) Procurement incidentals and charges for godowns
Difficulty: Tough. While the basics of MSP and FCI is known to every serious player but this question is asking about a low profile administrative formula:
ANS: Page 117, Economic Survey 2017-18 Volume 2

GuessmastergiriTM Rule#1: Extreme worded statements are always wrong. Here, both option A and B contain extreme word ‘only’. So, they ought to be wrong, and we are left with 50:50 between C or D.

(Pre19-SetA) Q3. The Global Competitiveness Report is published by the
(a) International Monetary Fund
(b) United Nations Conference on Trade and Development
(c) World Economic Forum
(d) World Bank
Difficulty: Easy to medium depending on your revision & recollection.

(Pre19-SetA) Q77. Which one of the following is not a sub-index of the World Bank’s ‘Ease of Doing Business Index?
(a) Maintenance of law and order
(b) Paying taxes
(c) Registering property
(d) Dealing with construction permits
Difficulty: Easy. Too much in news because of India’s improvement in ranking

So, A is the answer.
GuessmastergiriTM: Not Applicable.

(Pre19-SetA) Q19. Atal innovation mission is set up under the
(a) Department of science of technology
(b) Ministry of labour and employment
(c) NITI Ayog
(d) Ministry of skill development and entrepreneurship
Difficulty: Easy. Very cliched topic.

Which of the following statements given above is/are correct
(a) 1 only
(b) 2 only
(c) Both 1 and 2
(d) Neither 1 nor 2
Difficulty: Tough. Low profile topic, minute details asked.
ANS: 2018-March: IndianExpress: As per the the Industrial Employment (Standing Orders) Central (Amendment) Rules, 2018:

Anti-Guessmaster Question: Because GuessmastergiriTM Rule#1: Extreme statement is ALWAYS wrong then statement#2 ought to be wrong but if you believe that you’ll not arrive at right answer C.

(Pre19-SetA) Q70. With reference to India’s Five Year Plans, which of the following statements is/are correct?

Select the correct answer using the code given below
(a) 1 and 2 only
(b) 2 only
(c) 3 only
(d) 1,2 and 3
Difficulty: Tough. Since the coming of Modi government, UPSC has been asking Niti Aayog centered questions in both IAS prelims & Mains. Five Year plans became a low profile topic, besides here very minute details asked about individual plans.
ANS: India Yearbook 2019 (MinI&B) | हिंदी में भी उपलब्ध ch.23 on Planning

GuessmastergiriTM Rule#1: Extreme statement is ALWAYS wrong. Third statement contains extreme word ‘first’ so it ought to be be wrong and by elimination we are at 50-50 stage between A or C.

(Pre19-SetA) Q76. Which of the following statements is/are correct regarding the Maternity Benefit (Amendment) Act, 2017?

Select the correct answer using the code given below
(a) 1 and 2 only
(b) 2 only
(c) 3 only
(d) 1,2 and 3
Difficulty: Tough. While the basics of Maternity Benefit is known to every serious player but this question requires minute factualGK / salient features of an Act & it’s not a ‘high profile’ Act (unlike Food Security Act or MNREGA Act). Even India Yearbook doesn’t contain the full list of these salient micro-features asked here.
ANS: PRSIndia Page on this act.

GuessmastergiriTM Rule#1: Extreme statement is ALWAYS wrong so Statement 1 ought to be wrong because it contains extreme word ‘first’, and by elimination Answer should be B #Without-Studying-Anything.

Which one of the following statements given above is/ are correct?
(a) 1 only
(b) 2 and 3 only
(c) 3 only
(d) 1,2 and 3
Difficulty: Easy to Medium, Depending on your memory power of prime ministers timelines.

(Pre19-SetA) Q62. With reference to the management of minor minerals in India, consider the following statements :

Which of the statements given above is/are correct?
(a) 1 and 3 only
(b) 2 and 3 only
(c) 3 only
(d) 1, 2 and 3 only
Difficulty: Medium to Tough. While the basics of minor minerals is known to every serious player, this question demands further knowledge of Administrative procedures.

(Pre19-SetA) Q80. In the context of any country which one of the following would be considered as part of its social capital?
(a) The proportion of literates in the population.
(b) The stock of its buildings, other infrastructure and machines.
(c) The size of the population in the working age group.
(d) The level of mutual trust and harmony in the society.
Difficulty: Medium to Tough.
ANS:

GuessmastergiriTM Rule#5: Word Association. ‘Social Trust’: only one option has society / social word and that is ‘D’. so it should be the answer #Without-Studying-Anything.
Stay tuned for the remaining subjects’ Answerkeys.