Observation / Analysis about History-Culture in Prelims-19 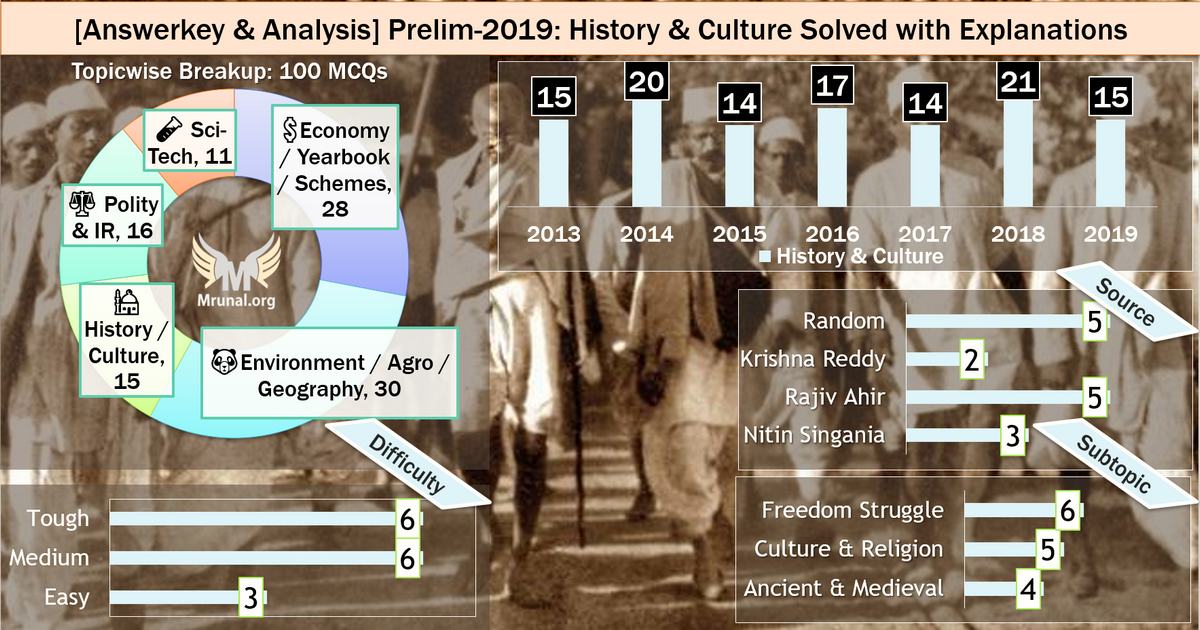 To conclude: History section in Prelim-2019 while it’s not easier than previous years but it’s certainly ‘less lunatic’ than previous years. So, the preparation strategy for 2020 should remain more or less the same as usual, which is given as following:

Click to Expand to read about History strategy for 2020

(Pre19-SetA) Q7. Which one of the following is not a Harappan Site?
(a) Chanhudaro
(b) Kot Diji
(c) Sohagaura
(d) Desalpur
Difficulty: Medium. In the real exam difficult to take a call between C or D if you are unable to recall the factoids.
ANS:

(Pre19-SetA) Q8. In which of the following relief sculpture inscriptions is ‘Ranyo Ashoka’ (King Ashoka) mentioned along with the stone portrait of Ashoka?
(a) Kanganahalli
(b) Sanchi
(c) Shahbazgarhi
(d) Sohgaura
Difficulty: Tough. Not given in routine books, and even if it was given- difficult to memorize and recollect all these factoids.  हर स्तंभ पर अलग अलग बात लिखी है, तो आदमी कितना याद रख सकता है!? As if students’ mind is not already burdened with 50 dozen abbreviated schemes and Apps of Modi-raj.

(Pre19-SetA) Q10. With reference to forced labour(Vishti) in India during the Gupta period, which one of the following statements is correct?
(a) It was considered a source of income for the State, a sort of tax paid by the people.
(b) It was totally absent in the Madhya Pradesh and Kathiawar regions of the Gupta Empire.
(c) The forced labourer as entitled to weekly wages.
(d) The eldest son of the labourer was sent as the forced labourer.
Difficulty: Tough. Ancient/Medieval India Dictionary term / Administrative thing asked.
ANS: Page 508, Upinder Singh’s: History of Ancient and Early Medieval India (Pearson)

g/m rule#1: extreme worded statements are wrong so B ought to be wrong but it doesn’t help even arrive at 50:50 stage, because we are still left with 3 options.

(Pre19-SetA) Q12. Consider the following statements :
1. In the revenue administration of Delhi Sultanate, the in-charge of revenue collection was known as ‘Amil’.
2. The Iqta system of Sultans of Delhi was an ancient indigenous institution.
3. The office of’ Mir Bakshi’ came into existence during the reign of Khalji Sultans of Delhi.
Which of the statements given above is/are correct?
(a) 1 only
(b) 1 and 2 only
(c) 3 only
(d) 1, 2 and 3
Difficulty: Medium to Tough. Medieval India Dictionary term / Administrative Thing asked. Although I don’t put it is ‘completely tough’ question, unlike Vishti these administrative posts are given in many books on competitive exams.
ANS: Krishna Reddy’s Indian History (Mcgraw-hill) Ch.10 Delhi Sultanate & Ch.12 Mughal Empire

(Pre19-SetA) Q9. Consider the following :
1. Deification of the Buddha
2. Treading the path of Bodhisattvas
3. Image worship and rituals
Which of the above is/ are the feature/ features of Mahayana Buddhism?
(a) 1 only
(b) 1 and 2 only
(c) 2 and 3 only
(d) 1, 2 and 3
Difficulty: Easy to Medium. Jainism and Buddhism are favourite topics of UPSC examiner. So basic features of Hinayana Vs. Mahayana Buddhism should be known to every serious UPSC aspirant.
ANS: Nitin Singhania’s Art & Culture (Macgrawhill) | हिंदी में भी उपलब्ध ch.12 Religions in India

Guessmastergiri Rule#4: A 3TF MCQ with 1-2 words= all correct without studying anything. If you ignore and/of/the then it fits this format, and you arrive at correct answer ‘D’ #Without-Studying-Anything.

(Pre19-SetA) Q11. Building ‘Kalyaana Mandapas’ was a notable feature in the temple construction in the kingdom of
(a) Chalukya
(b) Chandela
(c) Rashtrakuta
(d) Vijayanagara
Difficulty: Medium to Tough. While it is given in Nitin’s book but very difficult to memorize and recollect all small things in real exam.
ANS: Nitin Singhania’s Art & Culture (Macgrawhill) | हिंदी में भी उपलब्ध ch1. Indian Architecture

(Pre19-SetA) Q13. Consider the following statements :
1. Saint Nimbarka was a contemporary of Akbar.
2. Saint Kabir was greatly influenced by Shaikh Ahmad Sirhindi.
Which of the statements given above is/ are correct?
(a) 1 only
(b) 2 only
(c) Both 1 and 2
(d) Neither 1 nor 2
Difficulty: Tough. While these names are available in the TN and Nitin’s book but very difficult to recall and connect the dots. This reminds me of UPSC examiner’s fascination with lesser known Saint Dadu Dayal in 2013 and 2014 Prelims.
ANS:

(Pre19-SetA) Q16. With reference to the Mian Tansen, which one of the following statement is not correct
(a) Tansen was the title given to him by Emperor Akbar
(b) Tansen composed Dhrupads on Hindu god and goddesses
(c) Tansen composed songs on his patrons
(d) Tansen invented many Ragas
Difficulty: Tough because while Tansen’s name is mentioned in routine books but his detailed biography is not available in them. Question is directly lifted from TheHindu
ANS: 2018-March, TheHindu.

(Pre19-SetA) Q17. Who among the following Mughal Emperors Shifted emphasis from illustrated manuscripts to album and individual portrait?
(a) Humayun
(b) Akbar
(c) Jahangir
(d) Shah Jahan
Difficulty: Tough. While these Kings patronized painters but the specific information asked the question is difficult to find from routine books. 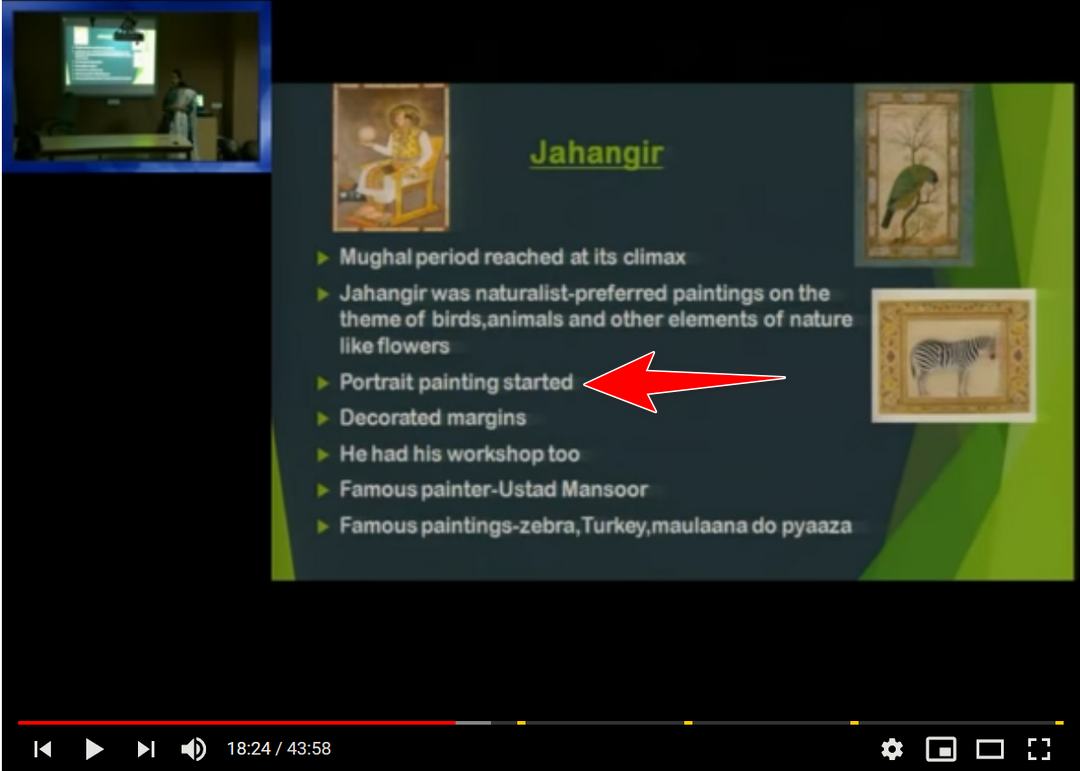 All these factors point out that Jahangir was obsessed with portrait just like a modern teenager with selfies on Instagram. Answer should be ‘C’.
GuessmastergiriTM: Not Applicable.

(Pre19-SetA) Q1. With reference to Mughal India, what is/are the difference/differences between Jagirdar and Zamindar?
1. Jagirdars were holders of land assignments in lieu of judicial and police duties, whereas Zamindars were holders of revenue rights without obligation to perform any duty other than revenue collection.
2. Land assignments to Jagirdars were hereditary and revenue rights of Zamindars were not hereditary.
Select the correct answer using the code given below.
(a) 1 only
(b) 2 only
(c) Both 1 and 2
(d) Neither 1 nor 2
Difficulty: Easy. Covered verbatim in Rajiv’s Book.
ANS: Spectrum: Brief History of Modern India by Rajiv Ahir | हिंदी में भी उपलब्ध Page 70

(Pre19-SetA) Q4. Consider the following statements about ‘the Charter Act of 1813’ :
1. It ended the trade monopoly of the East India Company in India except for trade in tea and trade with China.
2. It asserted the sovereignty of the British Crown over the Indian territories held by the Company.
3. The revenues of India were now controlled by the British Parliament.
Which of the statements given above are correct?
(a) 1 and 2 only
(b) 2 and 3 only
(c) 1 and 3 only
(d) 1,2 and 3
Difficulty: Medium. Depending your memory power of all the charter acts and their features.
ANS: Spectrum: Brief History of Modern India by Rajiv Ahir | हिंदी में भी उपलब्ध page 566

(Pre19-SetA) Q5. With reference to Swadeshi Movement, consider the following statements :
1. It contributed to the revival of the indigenous artisan crafts and industries.
2. The National Council of Education was established as a part of Swadeshi Movement.
Which of the statements given above is/are correct?
(a) 1 only
(b) 2 only
(c) Both 1 and 2
(d) Neither 1 nor 2
Difficulty: Medium because second statement requires mental recollection of a factoid. In real exam, student may have second thoughts about whether it was setup in Swadeshi period / afterward / by Indians / by British!?
ANS: 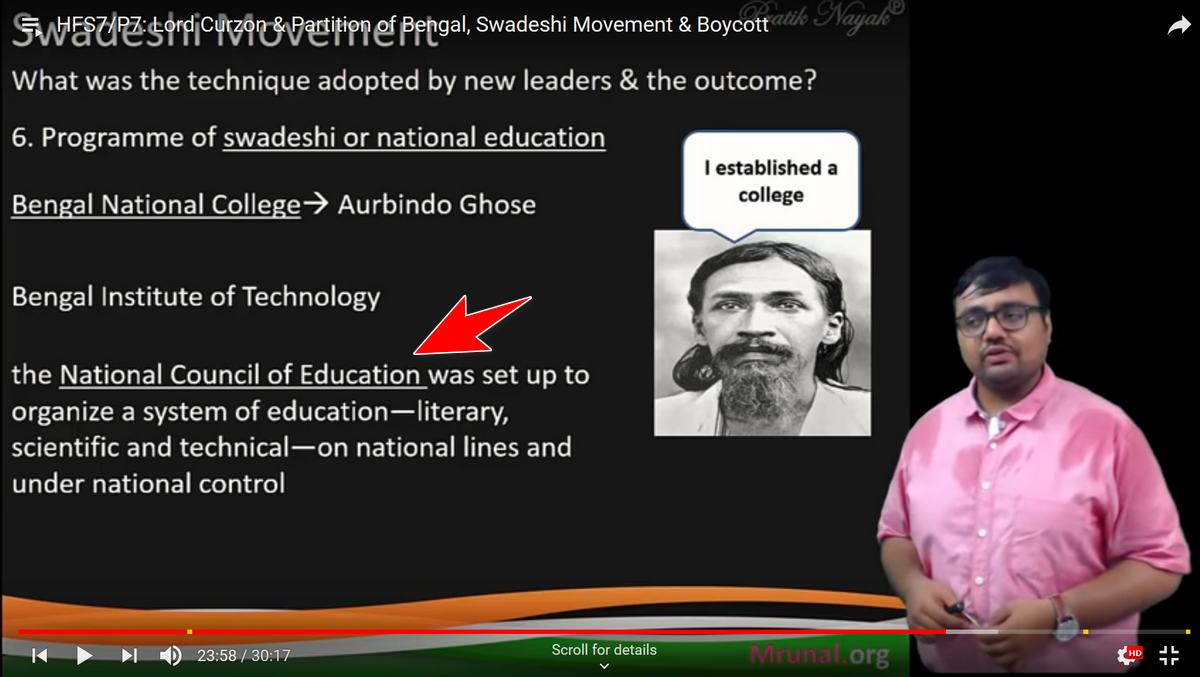 (Pre19-SetA) Q6. Consider the following pairs :
Movement: Organization Leader
1.All India Anti-Untouchability League: Mahatma Gandhi
2. All India Kisan Sabha: Swami Sahajanad Saraswati
3.Self Respect Movement: E.V. Ramaswami Naicker
Which of the pairs given above is/are correctly matched?
(a) 1 only
(b) 1 and 2 only
(c) 2 and 3 only
(d) 1,2 and 3
Difficulty: Easy. Big organizations, given in all routine books.
ANS: Rajiv

(Pre19-SetA) Q14. With reference to the British colonial rule in India, consider the following statements :
1. Mahatma Gandhi was instrumental in the abolition of the system of ‘indentured labour’.
2. In Lord Chelmsford’s War Conference’, Mahatma Gandhi did not support the resolution on recruiting Indians for World War.
3. Consequent upon the breaking of Salt Law by Indian people, the Indian National Congress was declared illegal by the colonial rulers.
Which of the statements given above are correct?
(a) 1 and 2 only
(b) 1 and 3 only
(c) 2 and 3 only
(d) 1, 2 and 3
Difficulty: Tough. Because these are less known factoids asked. War conference not specifically mentioned in routine books.
ANS: Spectrum: Brief History of Modern India by Rajiv Ahir | हिंदी में भी उपलब्ध page 357

(Pre19-SetA) Q15. With reference to Indian National Movement, consider the following pairs :
Persons: Position head
1. Sir Tej Bahadur Sapru : President, All India Liberal Federation
2. K.C. Neogy : Member, The Constituent Assembly
3. P.C. Joshi : General Secretary, Communist Party of India
Which of the pairs given above is/ are correctly matched?
(a) 1 only
(b) 1 and 2 only
(c) 3 only
(d) 1, 2 and 3
Difficulty: Medium to Tough. #3 PC Joshi is lesser known / less mentioned person in routine books. In real exam student might get confused whether it was PC Joshi or MN Joshi who was the general Secretary.
ANS:

GuessmastergiriTM: Not Applicable.
Stay tuned for the remaining subjects’ Answerkeys.