Steel industry also requires dolomite, manganese etc. but in small quantities=> their presence is not the main deciding factor for the location.

During the Industrial Revolution, iron and steel industry were setup near coalmines, due to following reasons:

Why do we need “Coking coal”?

Because Iron ore=has iron oxide. But We’re only interested in iron. So, we’ve to get rid of the “oxide” part.

*for heating you can use other variety of coal / even electricity.

The curious case of Cleveland

Sweden has high quality iron ore, yet it specializes in non-ferrous metallurgy and light engineering, (rather than iron-steel industry), why?

New technologies for steel production reduced the “pull” factor of coalmines in deciding location. For example:

Combined with the invention of electric smelters, technology helped in development of Mini-steel plants near industrial cities (And away from iron-coal reserves). 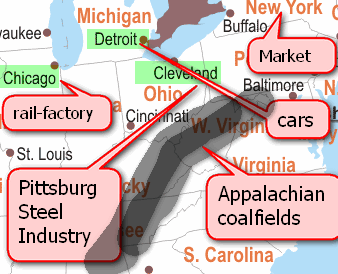 Industrial Inertial in India
In July 2013, POSCO (Korean steel giant), pulled out from the steel-mill project in Karnataka worth almost $6 billion FDI, due to bureaucratic red tapes in environmental clearances and land acquisition. We can only speculate the vested interests and powerplay going on behind the curtains involing bureaucrats, politicians and mining mafias.

USA
After WW2 and from the lessons of Aerial bombings destruction in Britain, US government decided that it was not wise to let entire steel-industry concentrated in the East (Great Lakes-Pittsburg region). Therefore, some plants were setup in the west (California). They get coal from Utah and Iron Ore from Eagle Mountains.
USSR

Although Mao’s “backyard” idea was an #Epicfail, we’ll see in the next article on steel industries!