Update I had to make some fixes in the site theme. IF the site is not displayed properly in your browser – clear cache (control+shift+del key together).
for more troubleshoot click me

To prevent this “Drain of wealth” through royalties, Indian Government uses two methods:

Let’s check them one by one:

When Indian subsidiary sends royalty ca$h to foreign parent, The foreign parent company has to pay (direct) tax on it. (because this is one type of “income” earned from India.) 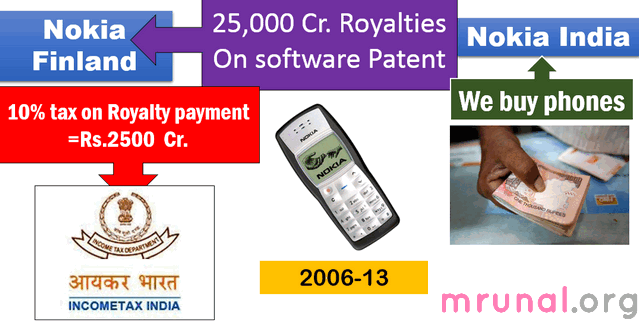 Tax on Royalty Payment (in theory)

Let’s assume Nokia India sold handsets worth xyz crore and has to pay Rs.25,000 crore to Finland parent as “royalty” for the software patents in those mobile phones. 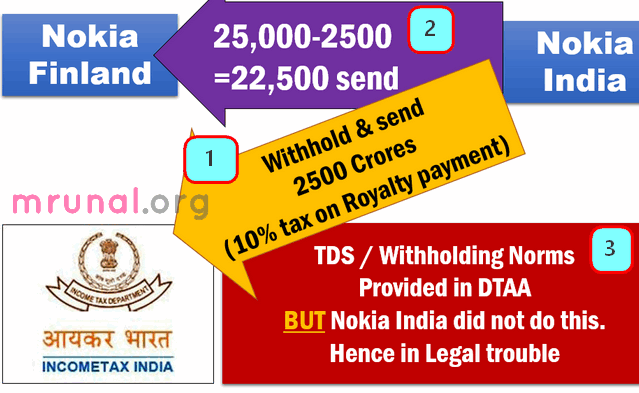 What Happened in Nokia Royalty case?

May 2014: Nokia sends letter to Mohan for resolving this royalty tax matter under Finland India Bilateral Investment Treaty (BIT). This BIT treaty provides that if dispute cannot be resolved in three months after notice THEN

Q. Write a note on the structure and functions of UNCITRAL (200 words)

Q1. Which of the following is an illustration of “Tax withholding Norms”?

Q2. Why are Nokia India and Income tax department involved in a court litigation just before takeover by Microsoft?

Q3. Consider following statements about the Tax on Royalties paid to foreign entities.

Q5. When Nokia or Vodafone says “we want arbitration under UNCITRAL to settle our tax dispute with Indian government”, it means ___.