[Ethics] Artificial Intelligence: End of Human Miseries or End of Humanity itself? with Model Answer writing

This is already 228 words. So, if AI asked in GSM3, you can finish the answer here itself. “Formal” conclusion is unnecessary if you reached the word limit, because it’s a science-tech question. Even if your summerized, it’d be a repetition of same things only.

Caution: If at all you decide to write a conclusion, don’t bring new elements / ideas in it such as “While AI indeed has numerous applications in economy, banking, finance, healthcare, education and defense but it could pose great danger to mankind if its research and development remain unregulated.”

AI: a threat to humanity for GSM4?

A true AI has ‘self-learning’ capabilities. So, even if a human engineer develops the AI code with pre-defined parameters of respecting human rights and environmental protection , this newborn AI will eventually learn that economic reasoning most beneficial for its own survival & growth i.e. get more money to buy CPU upgrades and more backup harddisks for itself! Such economic reasoning of A.I. will lead to following consequences:

Health NOT for “all”

Education NOT for “all” 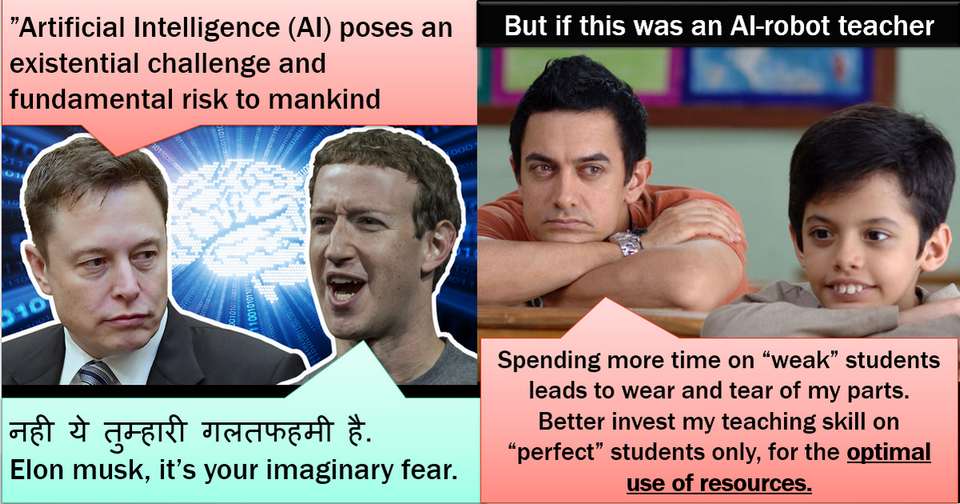 Research NOT of “all types”

However, an AI equipped robot will disobey them, as soon as its AI ‘learns’ that humans are allowed to kill in self-defense, but robots are not allowed- this is one type of social inequality and ‘social inequality is wrong’.

Thus, even if AI is coded to act on social / humanitarian reasoning rather than economic reasoning, it could still ultimately ‘learn’ work in its self-interest.

This is already 1800 words. More than the prescribed word limit for even Essay paper! so let’s conclude. However, you’re most welcome to add more pro or anti points in the comment section below.

There are two primary ways to conclude any answer:

Therefore, a suitable conclusion will be merely: (1) express concern and then (2) advise caution. let’s try: