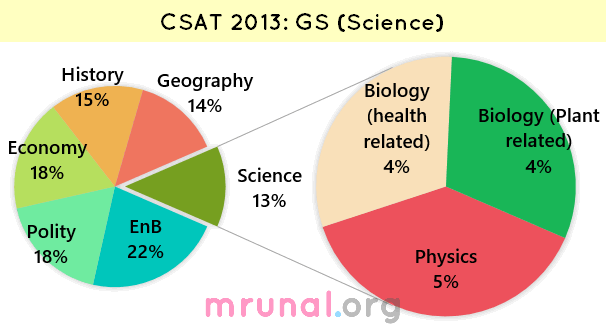 1. Which of the following diseases can be transmitted from one person to another through tattooing?

Hepatitis B and HIV are spread via Tattoing hence Indian Army had made rule that disqualified youngsters with tattoos on medical ground.

Chikungunya is not spread via tattooing.

Which of the minerals given above is/are required by human body for the contraction of muscles?

Hence answer (D) 1 and 3 only. Or (A) only 1 (depending on the interpretation of UPSC examiner.)

3. Which of the following statements is / are correct?

Statement#2 is wrong because

As per page 109-110 of Analytic techniques in Biotechnology TMH

Statement #3 is wrong because

as per BBC article on Genetic Engineering

Golden rice is developed by transferring carrot genes to rice. the new variety of rice contains Vitamin “A”. Hence Statement #1 correct (across different species of plants)

In 1953, scientists discovered the structure of DNA, and in 1972, researchers developed a method for cutting and splicing DNA. That method became known as recombinant DNA, or rDNA. Since then, researchers have learned how to move genetic material in the form of DNA from one plant or animal to another. They can also take DNA from an animal and place it in a plant, and vice versa.

1. Improper handling and storage of cereal grains and oilseeds result in the production of toxins known as aflatoxins which are not generally destroyed by normal cooking process. Aflatoxins are produced by

Aflatoxin is a mould produced by fungus that are toxic and carcinogenic. (IndianExpress)

Fruits and vegetables continue their metabolic activity after harvest…Metabolic Activity is manifested by respiration….Reduction of temperature is an effective means of reducing the rate of respiration. (Fundamentals of food process engineering, Page 402)

3. Many transplanted seedlings do not grow because

Root hairs are extremely delicate, whether on a tree or a seedling. When transplanting young trees from a nursery to a woodland, damage to the roots and root hairs often leads to death of a tree. (Advanced Biology, Michael Kent, Page 279)

4. Which of the following leaf modifications occurs/occur in desert areas to inhibit water loss?

Hence Ans (D) all of above.

1. Ball bearings are used in bicycles, cars, etc., because

Which of the above are optical illusions?

Hence answer must contain both #1 and #4. Eliminate the choices accordingly

Thus we are left with answer C.

3. Rainbow is produced when sunlight falls on drops of rain.

Which of the following physical phenomena are responsible for this?

A rainbow is always formed in a direction opposite to that of the Sun. The water droplets act like small prisms. They refract and disperse the incident sunlight, then reflect it internally, and finally refract it again when it comes out of the raindrop Due to the dispersion of light and internal reflection, different colours reach the observer’s eye
Hence all 3 correct=>Answer (D)

4. The known forces of nature can be divided into four classes, viz, gravity, electromagnetism, weak nuclear force and strong nuclear force. with reference to them, which one of the following statements is not correct?

Refer to the table given on NCERT Physics Class11, Chapter1, Page 10

5. The efforts to detect the existence of Higgs boson particle have become frequent news in the recent past. What is /are the importance/importance of discovering this particle?

The Higgs Boson gives idea on how each particle has mass. It doesn’t give better fuels for nuclear fission or for inter-space travel. (or atleast I did not find it on the internet.)

Only one topic remains: EnB answerkeys. They’ll be uploaded soon + thanks Mr. Shiva Ram and Mr. Siriyal Patel for inputs.