links will be updated once I finish last (first) part on UNDP HDI-2014 report.

Q. How does it decide poverty line?

Q. Who provides the data of monthly Expenditure?

According to Tendulkar formula, poverty has declined, as seen in following graph:

Mugup the value of Total poors (%wise) & in crores

*this is their official recommendation. Rest numbers are “derived”.

*these are the official numbers recommended by them. Remaining figures are derived.

Q. Why is Ranga unhappy with journalists and politicians? Inform “the nation” in 200 words. 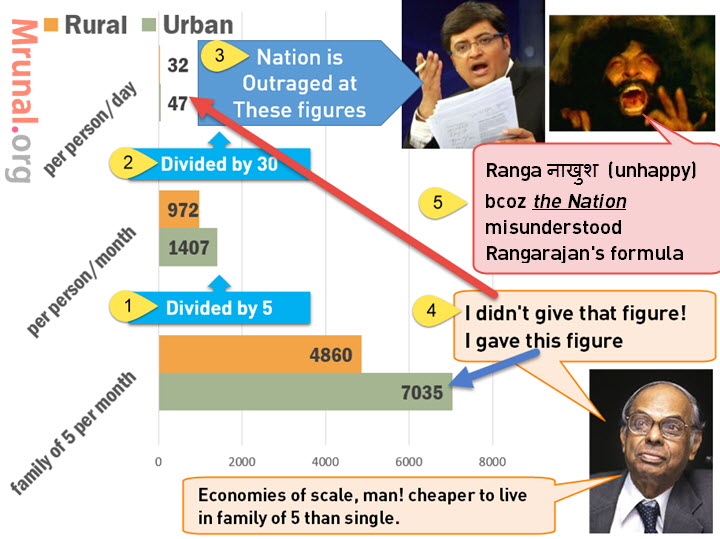 How is 100 million poors increased?

In the Indian economy books writing during Adam Smith’s time, you’d have read poverty line = “2400 calorie in Rural areas and 2100 calorie in Urban areas.” That was Lakdawalla Committee (1989-1993).

Observe that Ranga reduced the calorie requirement- why?

Coming back to Original topic:

The Union: state contribution ratio will be as following…

As per Economic Survey, we can classify all Sarkaari schemes, into following categories. And I’ve covered the schemes into the same format in my ch13 summary subparts.

Budget and Economic survey discuss only three schemes under this category

Let’s check’em one by one

Additionally, Budget 2014 also announced “Start Up Village Entrepreneurship Programme” for rural youth. but exact details yet to be worked out.